Before a long-awaited trip to Disney World, I made sure to cover up the garden bed with straw. Doug told me the straw would help preserve the moisture. I also gave all the vegetables a good soaking and hoped for the best.

After returning from the eight-day trip, I was interested to see what had happened in the garden.

Cherry tomatoes and radicchio harvested from the garden

My wife was happy to see the red of a few cherry tomatoes, which she picked right away. We also cut some radicchio to make a salad … hoo boy, that was really bitter, and not even Italian dressing could make it edible.

And now I’m wondering if it was actually radicchio because it doesn’t really resemble any of the pictures I’ve seen online, especially with the purple head in the middle.

Well, the only good news on that front is that my wife’s classroom pet, a bearded dragon named Queen Malika that’s at home with us for the summer, liked it.

Doug says: Radicchio is a cool weather crop. When things get hot, it gets bitter. Try to plant some in mid-August and see what happens. Hopefully it will head up in September when things cool off. I’ve only picked one cherry tomato in my garden, so you’re doing good. I think the mulch will help. I think it’s also time to feed some of your plants with Grow from Espoma.

Well, I’m going to chalk up my beet failure to my lack of knowledge. I bought a six-pack of beets in May and planted each of the six sections as directed, about eight inches apart from each other. It’s been almost two months since I planted them, so I pulled out the smallest one, and what did I find? I discovered that each section I planted was actually three plants and should have been separated. Two of the beets were just about non-existent, leaving one beet about the size of a small baby carrot.

I guess it’s a good thing that none of the family besides me likes beets!

Doug says: I think it’s time for a soil test from the Penn State Cooperative Extension. They are only nine dollars and will tell you where fertility and pH is. When we see beets that don’t head up, that’s often times a pH issue. Even though the compost might be rich in nutrients, if the pH is off, the plants can’t get the nutrients.

Lettuce sprouting through the straw 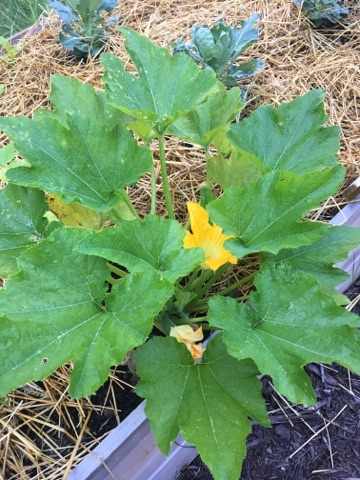 Flowers visible on the squash plant.

The lettuce seems to be doing OK after I thinned it out, and the squash looks good to me, but I’m not seeing any fruit on it.

Most of the tomato plants have a few small fruit, while two don’t have any. There is one pepper on each of the two plants added in May, and nothing’s sprouted yet on the one I bought a few weeks ago. 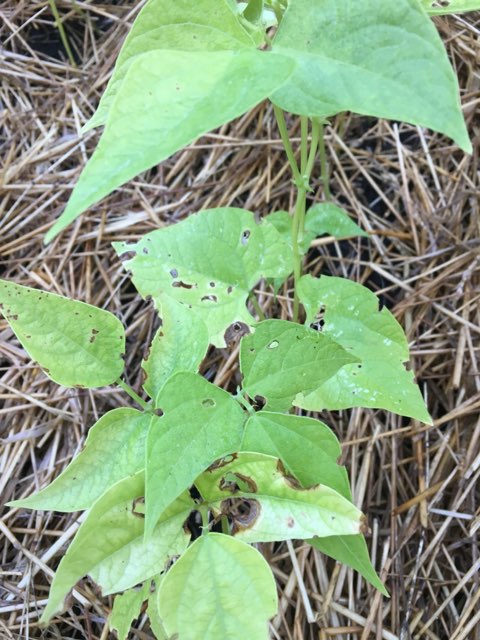 The second crop of beans has seemingly hit the wall, the same as the first ones did.

The pole beans appear like they’ve stopped growing, and the cucumbers all died over vacation, including the new seeds. So that’s disappointing, but I understand that’s what happens sometimes.

Doug says: Once we have that soil test back, we’ll have all the answers we need to start fall crops. That’s where I think the problem lies.

I should also mention that we have a blackberry shrub that I planted last year, and there were about 40 berries in various stages of growth the night we got home. And then a deer ate them all overnight! It might have been better to have never known they existed…