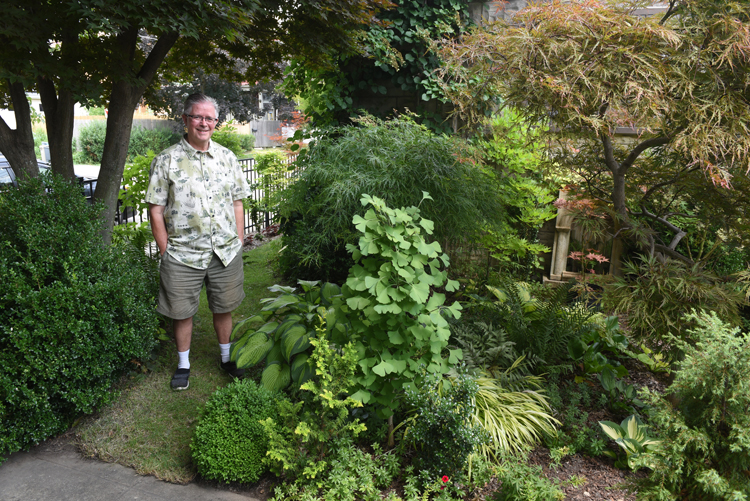 John Staudacher is a lifelong gardener who was diagnosed with Parkinson’s disease, but he’s determined to keep his amazing city garden going strong. He lives in Regent Square a neighborhood of Pittsburgh, Pa. Photos by Doug Oster 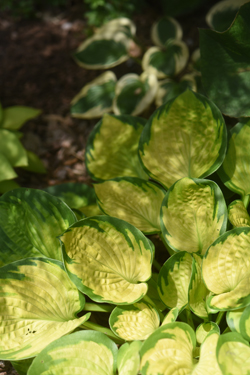 Hostas are one of the favorite plant John Staudacher grows.

Staudacher, a lifelong gardener, was diagnosed with Parkinson’s disease last November after years of symptoms. The disease has made it harder for him to do everything necessary to keep his city lot garden, filled with hundreds of plants, looking pristine, but he’s determined to do so.
“I’ve tried to simplify my gardening,” he said sitting in the shadow of a huge Japanese maple planted back in 1992. “I have trouble with walking in my garden; weeding is particularly a problem. My right leg and right foot don’t work so well.”
The shredded leaves he’s saved for years are now used as a natural — and beautiful — weed barrier mulch.
“I can’t keep up with the weeding,” Stauncher lamented. “My place was always immaculate. Sometimes now, I slide, but it’s OK,” he said smiling.
The front yard stops strangers in their tracks as it’s filled with beautiful trees, shrubs and perennials. Originally a shade garden until a large tree died in 2013, Staudacher started filling the area with sun lovers including pollinator plants like coreopsis, liatris, lobelia and others interspersed with his beloved conifers, some spectacular pink hydrangeas and other plants.
Like most gardeners, he’s gone through phases over the years about what to plant. At one time, dozens of roses filled the garden until his son was born. Not only did he vow not to use chemicals, but as his son grew and had the run of the garden, roses just weren’t going to work. Then the garden was filled with nothing but perennials, and at one point Staudacher had an epiphany.
“I decided I wouldn’t grow anything I didn’t love, and I love Japanese gardens, hostas, conifers and ginkos,” he said.
What started in 1992 with that one Japanese maple has given way to 34 trees total perfectly sited in the city lot.
“I love the texture and form,” Staudacher says of the maple trees but then admits, “I don’t particularly love flowers. If a plant has a flower, it’s a bonus,” he said laughing.
The Japanese garden in his backyard is filled with all of those plants. Various hostas hug the ground along with miniature conifers all growing under a variety of statuesque Japanese maples. Those tiny conifers are part of the garden simplification as they don’t require a lot of maintenance. “I put them in the ground and clip them every once and a while and if they get too big, I give them away,” he says with a laugh.
He looks through his extensive 10-page plant list to identify a ‘Firefly’ climbing hydrangea. The variety was introduced by Dan Benarcik, a gardener at Chanticleer in Wayne, Pa., which is Staudacher’s favorite public garden. The two vines ramble up his garage wall, their golden variegated foliage lighting up the back wall. In front of the maples is a small dawn redwood in a pot that he is going to prune into a Bonsai form.

Coreopsis is one of the pollinator plants in John Staudacher’s garden. 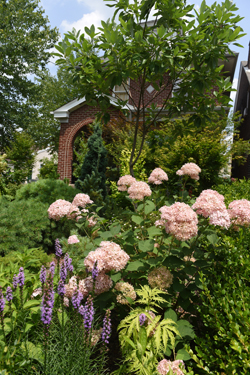 Pollinator plants like liatris and a ‘Invincibelle Spirit’ hydrangea are just some of the plants in John Staudacher’s garden.

His amazing garden was included in last year’s Pittsburgh Botanic Garden’s Town and Country Garden Tour, inviting hundreds to explore his diminutive city garden.
“Every gardener wants to share his vision with other gardeners,” he says of welcoming visitors.
He’s continually finding spots to squeeze another Japanese maple or hosta into the garden, but that’s fine with his family.
“My wife says this garden will soon be bigger than the house,” Staudacher says, laughing.
His gardening might have changed a bit, becoming more challenging, but Staudacher is committed to continue working in the soil.
“I think I appreciate it more,” he says of time in his garden. “It was just routine for me before. I look forward to my gardening now, much more.”
While looking over the fine, serrated leaves of one of his treasured Japanese maples, he reflects on what the garden provides.
“I get peace out of it,” he says with a little smile.

Doug Oster is editor of Everybody Gardens, a website operated by 535Media, LLC. Reach him at 412-965-3278 or doster@535mediallc.com. See other stories, videos, blogs, tips and more at everybodygardens.com.
This story is part of an occasional series about gardeners overcoming challenges.

Have garden questions? You can get them answered here.