It’s been more than a month since most of the vegetables were planted, so I thought it might be time to give an update on what’s growing. 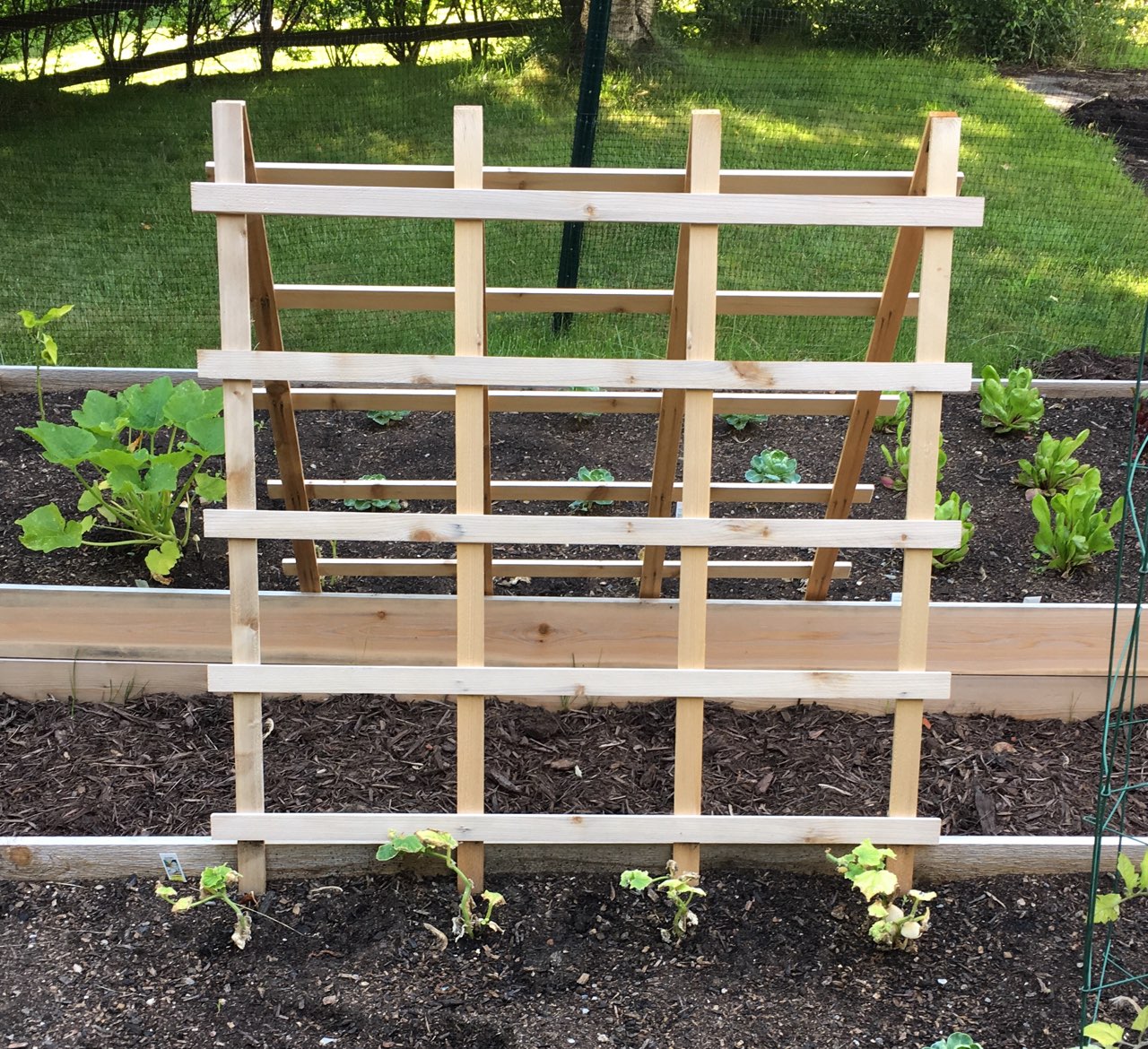 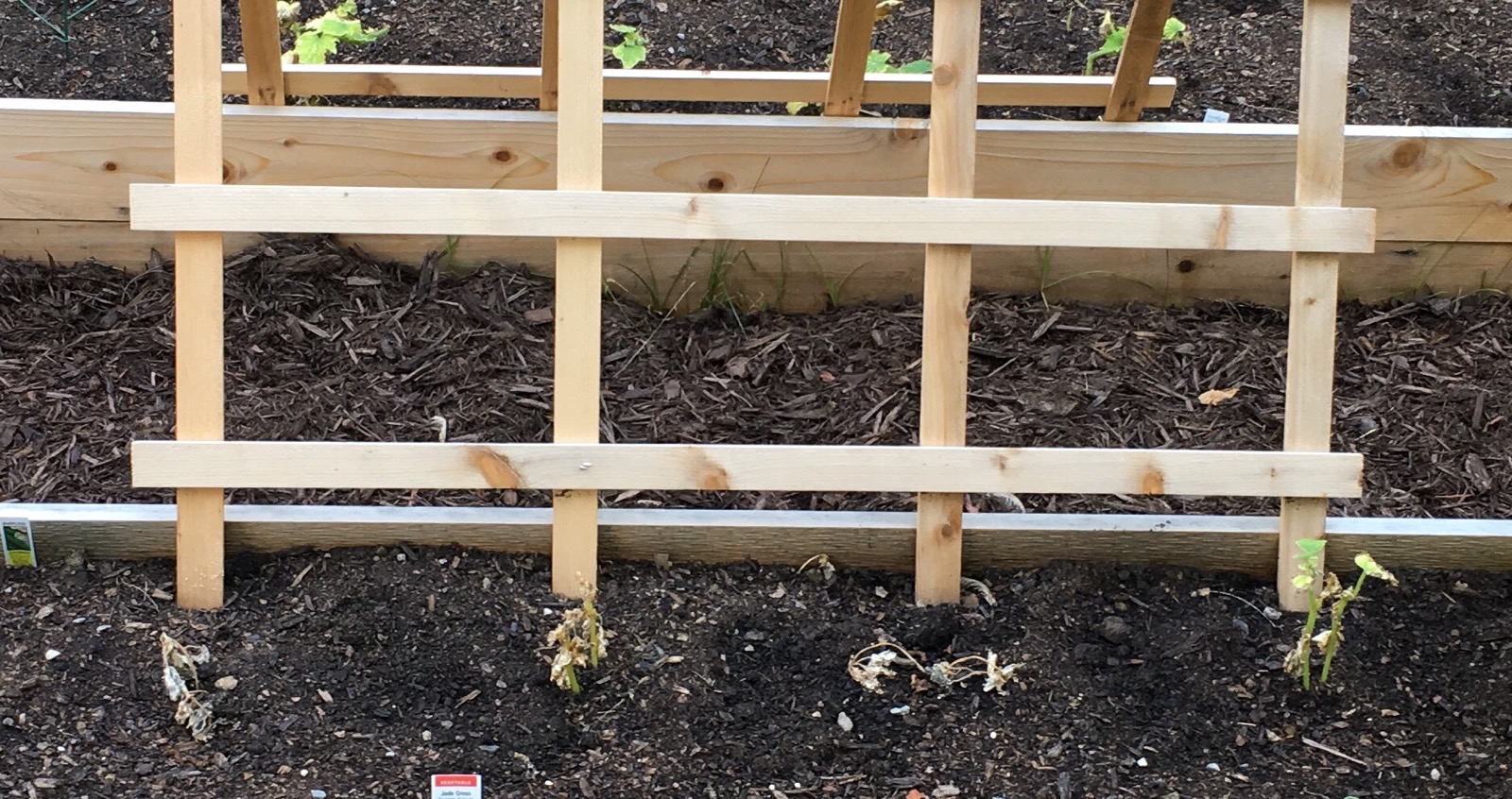 The biggest disappointment has been the cucumbers that I planted from flats. I know I’m new at this, but I’m pretty sure these are toast.

Since these weren’t growing, I took the liberty of planting some cucumber seeds in the spaces between the plants in hopes of a second chance at cucumbers. (I do have this nice trellis, after all!)

Doug says: You’re learning that not everything works, especially the first season. These things happen, great idea planting some seeds. I’d also be tempted to poke around the nursery for some more plants and get them in the ground. Make sure everything gets the water it needs as things get dry and hot. Another thing that might be fun is to get an annual vine at the nursery on sale and stick it in to climb. It could share space with the cukes. Looking at the garden, another thing I’d recommend is a layer of straw mulch to keep the soil evenly moist. 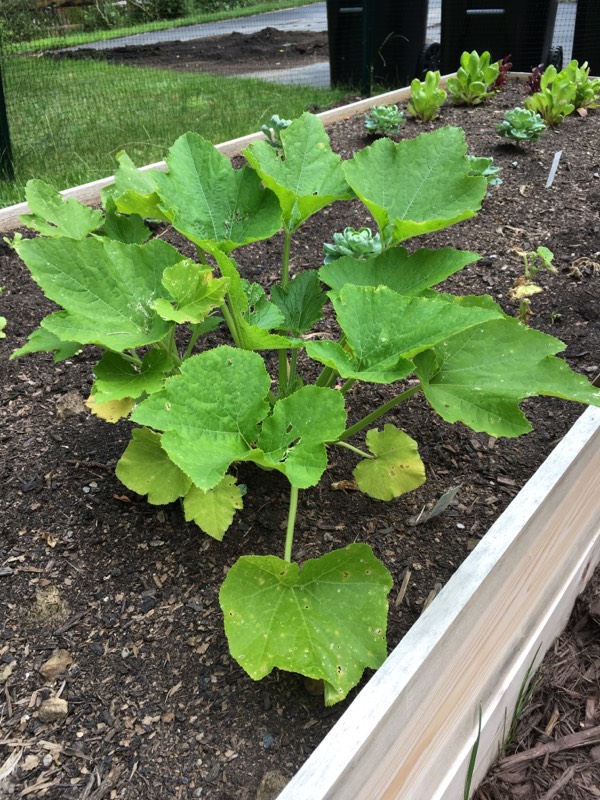 The squash has grown the most out of anything planted early from the veggie flats.

My squash plant seems to have shown the most growth after being planted from a veggie flat in May. 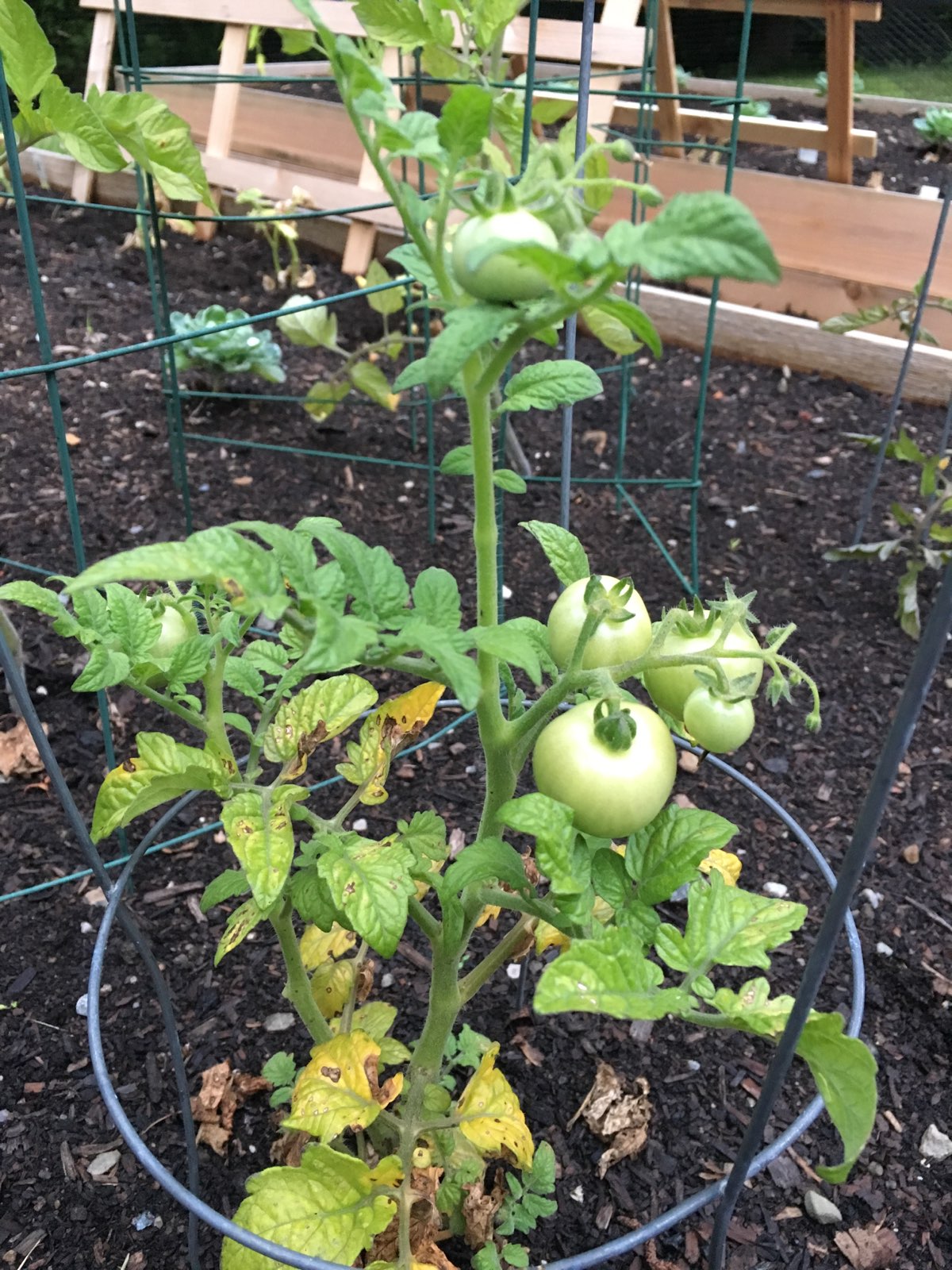 The cherry tomatoes were the first to show up. 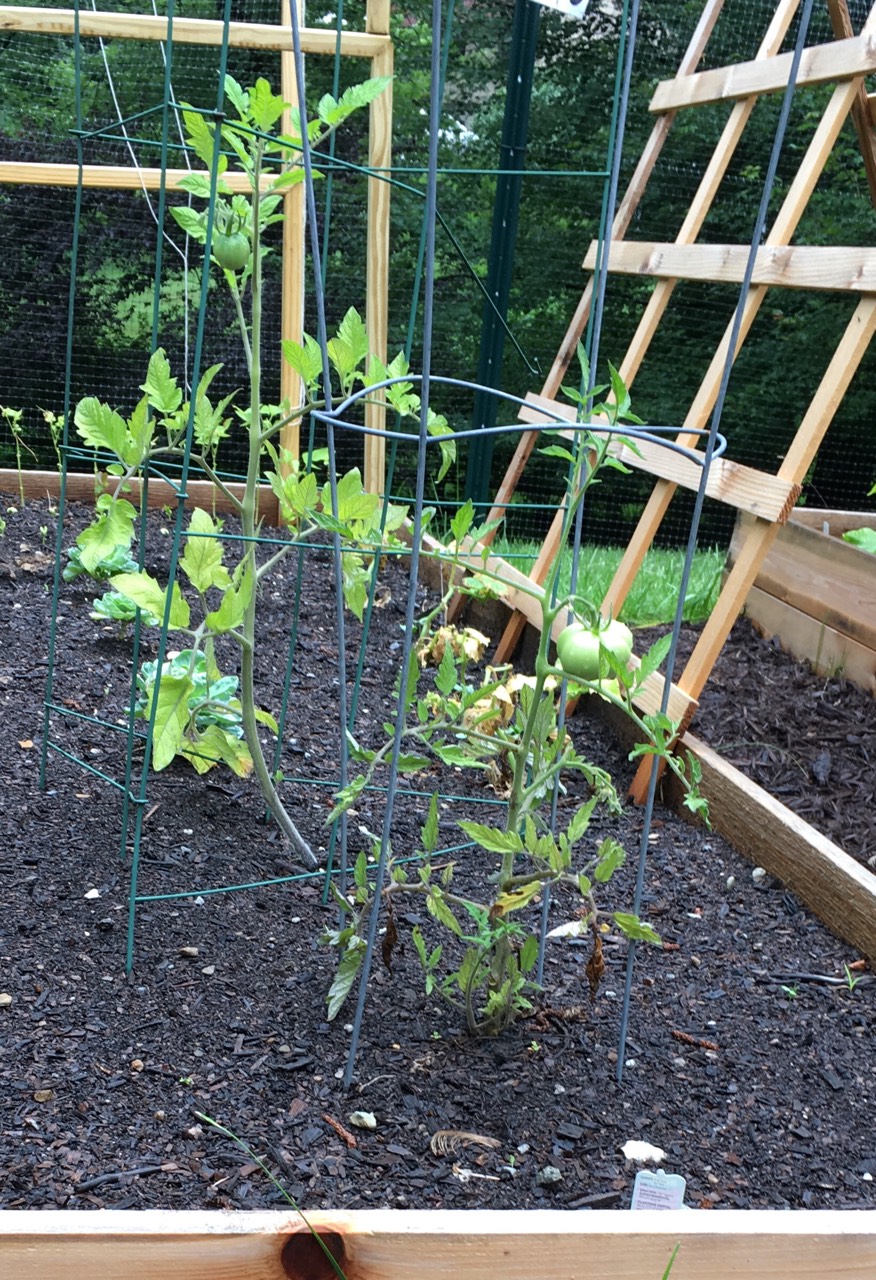 One tomato on this plant 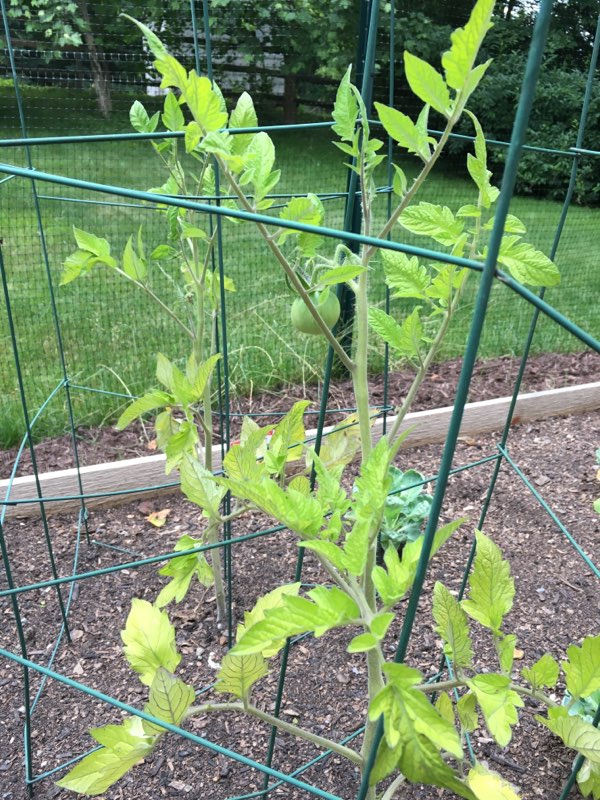 One tomato growing between the 2 Limbaugh Legacy plants

The tomatoes seem to be growing at a decent pace, with several actual tomatoes appearing. The Husky Cherry Red has a bunch growing, with one fruit so far on the Red Beefsteak. The ‘Limbaugh Legacy Potato Top’ plants look nice, too, with one tomato so far between the two plants. 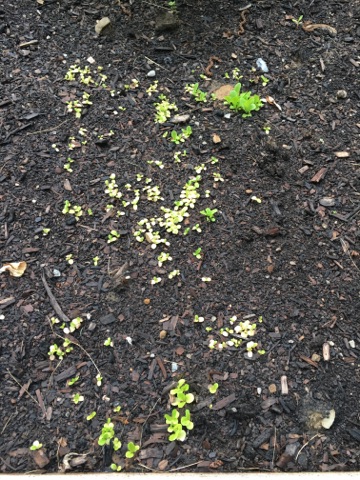 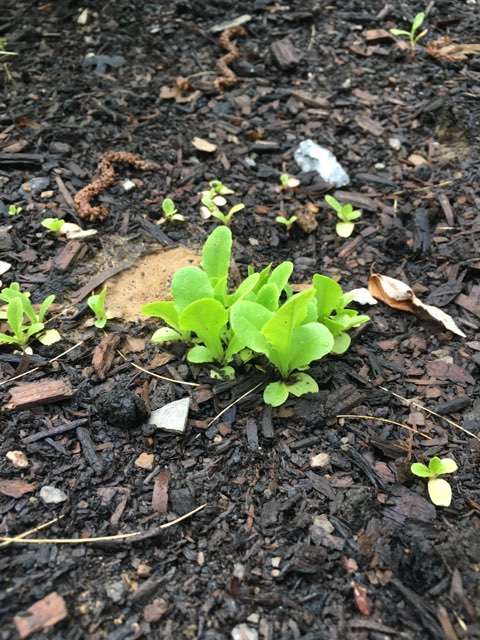 Some of the successful lettuce 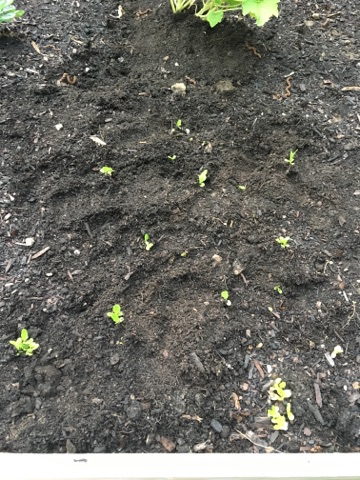 Lettuce after it was thinned

So the lettuce didn’t seem to be doing much of anything. It sprouted from seed and basically just stayed super tiny for more than a month. I know Doug likes to talk about micro-greens, but I think these were even smaller than that. I pulled out the tiniest plants and left the best-growing ones, hopefully with a little more space to get even bigger.

Doug says: They are very small when thinned and you can see that when you give them a little space, they will thrive. I would throw down some more seed too. Cool weather crops like lettuce are probably going to go to seed (bolt) when things get hot.

On the Brussels sprouts front, all of the plants seem like they are growing slowly and steadily. From what I’ve read, these do better in cooler climates. So far the weather’s cooperated, but I don’t know what will happen if it gets really warm in July and August. 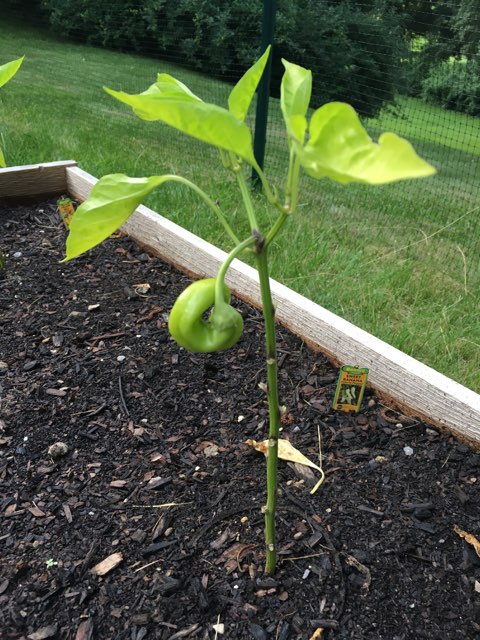 One banana pepper is evident 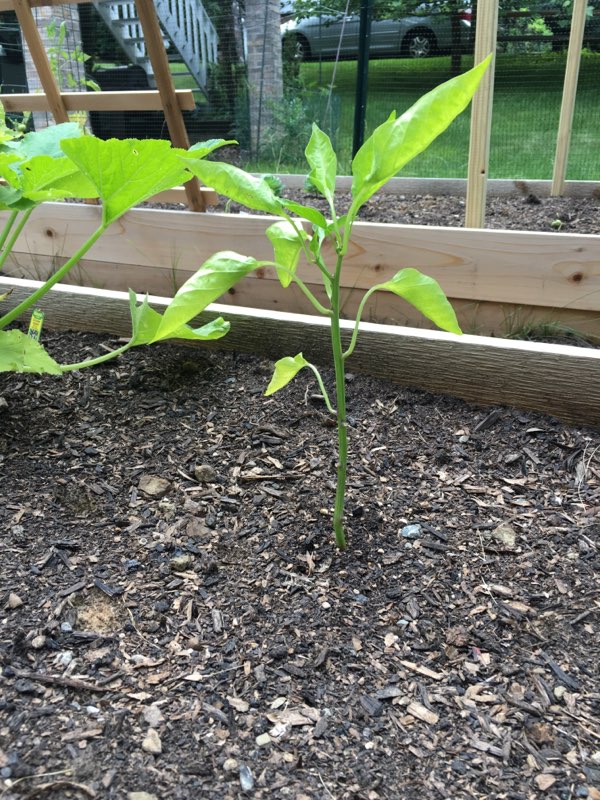 Nothing showing yet on the yellow pepper plant

The two pepper plants that I added don’t seem to have much going on, other than one banana pepper. 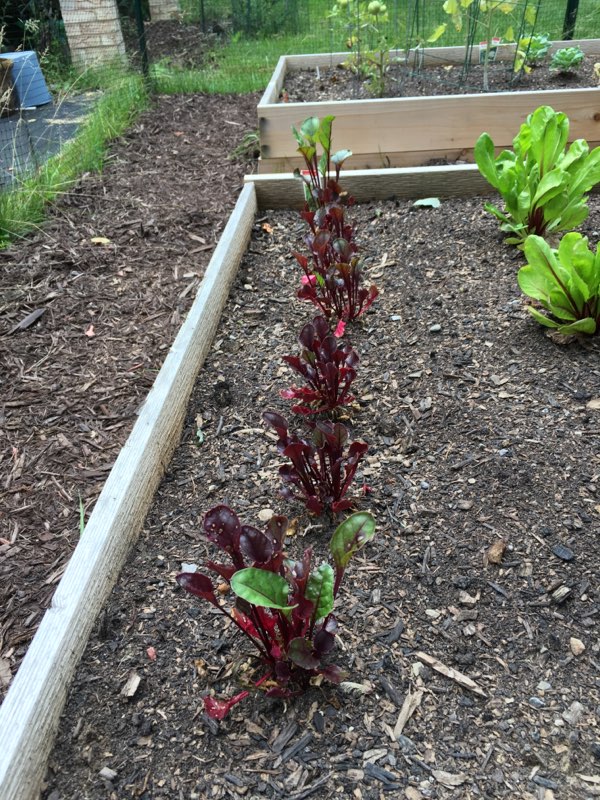 A row of beets 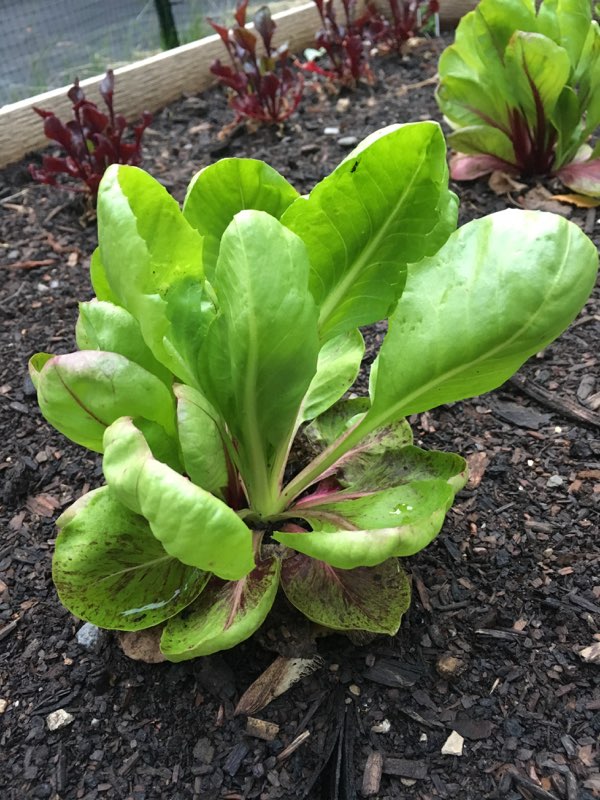 Radicchio seems to be growing OK

I don’t have much to report on the Fresh Start Beets or Radicchio front. They’re growing steadily.

Now it just seems like it’s a waiting game and making sure the vegetables get enough water during the summer. I can’t wait though until I can eat something that grew in the garden!