The following is a story from my friend Gary Ibsen who runs TomatoFest. It’s a company offering hundreds of interesting organic heirloom seeds, including Pittsburgh’s most famous heirloom tomato, ‘Limbaugh Legacy Potato Top.’ Last year I wrote about ‘Anthony’s Passionate Heart’ tomato in this story. He named the variety in memory of the late celebrity chef Anthony Bourdain.

The tomato he writes about here, has a touching personal connection to his family. 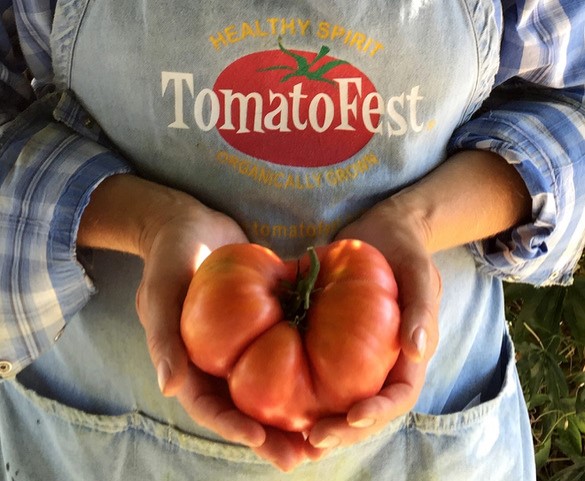 ‘Marianna’s Peace’ is an heirloom tomato that holds a special place in the heart of author Gary Ibsen.

I married into a family of farmers. Dagma (Gary’s wife) holds the cherished legacy.

I was given seeds many years ago by Marianne’s sister who lived in Munich, Germany. Marianne’s family were farmers from Bohemia, now the Czech Republic. Her life on the farm ended during World War II, in May of 1940, when the Russians came with a truck to her school and loaded all the children to transport them to a labor camp.

Marianna, and five other girls, escaped by jumping from the moving truck. Only two of them survived. As she crossed the Czech border she was shot in the leg, and yet she traveled by foot with her girlfriend through the Austrian Alps to Vienna.

With the help of her friends she was able to continue to the town of Weiden in Bavaria. Marianne lost all contact with her parents, brother and sister, but through years of diligent searching and the aid of The Red Cross she found them in 1955. She fell in love, and married an American soldier in 1957 and moved to Spokane, Washington where they raised four children.

‘Marianna’s Peace,’ named by me in tribute to Marianne’s resilient, generous and wonderful life, is an indeterminate, potato-leaf variety that produces large yields of one to two pound pink, beefsteak tomatoes with exceptionally rich, luscious, complex flavors reminiscent of the finest of those “old-fashioned” tomato flavors. The memory of which is the stuff-of-dreams for all tomato lovers. In taste trials at the Carmel TomatoFest with attending friends and chefs, ‘Marianna’s Peace’ was judged the “best tasting” tomato.
Originally distributed exclusively by TomatoFest.com, ‘Marianna’s Peace’ is now distributed by many seed companies in the U.S.

It would please Marianne that her family’s farming heritage is continued through her daughter, Dagma Lacey, owner of TomatoFest.com.

This tomato is named for Anthony Bourdain.

Tomato seeds found on WWII battlefield live on. Here’s how to get some for free.