Gary Ibsen was surprised to hear from me as he picked up the phone in his California home. We had scheduled a morning interview, but neither of us realized we were in different time zones. The 74-year-old co-owner of TomatoFest was in the middle of his morning ritual with the love of his life, Dagma Lacey, and asked if I could call back in 30 minutes.
“At 6:40 a.m. I start to make Dagma’s tea,” he says. “At 7 a.m. I slip into the dark bedroom, put her pot of tea on her bedside table, then wake Dagma with a kiss, and whisper, ‘Good morning, Dagma. Here’s your tea to start what I hope will be your best day.’ Then I close the open window, turn on the heat, or start a fire in the wood-burning stove, fluff up her pillows, give another kiss, then return to the office.” 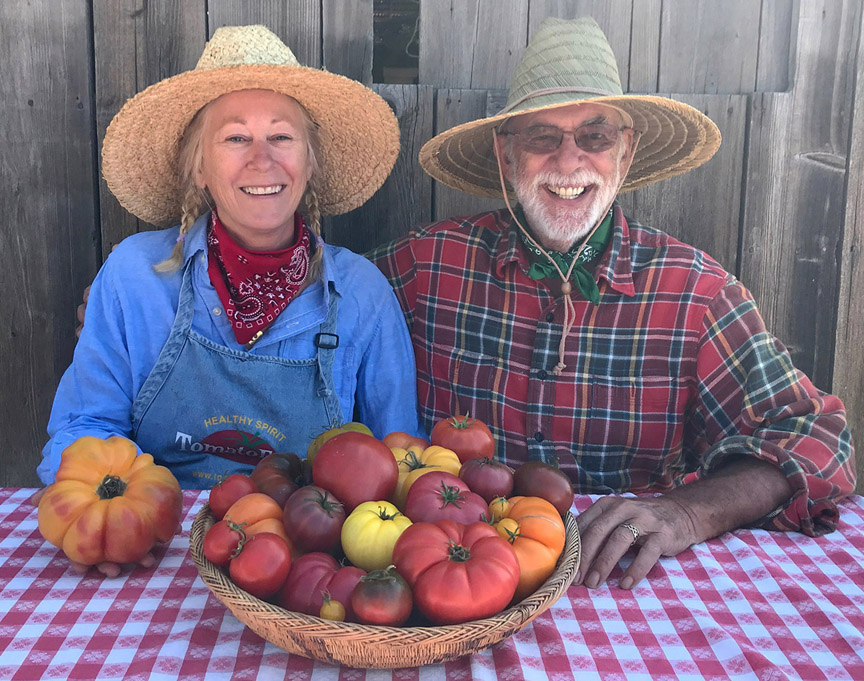 Dagma Lacey and Gary Ibsen run TomatoFest, a company that offers 650 different heirloom tomatoes to gardeners. Most of the seeds they grow are donated to schools and others who need help.

The two business partners share a deep love for each other and also for heirloom tomatoes, acquiring well over 600 different varieties of seed. Some are sold to gardeners but most are distributed to charities and others who need help.
He discovered heirlooms accidentally in the early 1990s when a farmer down the road invited him to see his fields. As the farmer proudly talked about the soft, rich loam that was home for his plants, he handed Ibsen six heirloom tomato seedlings to try in his own garden. At harvest time, Ibsen was beyond thrilled with the fruit harvested.
“I was overwhelmed with the pleasure, quality of taste and the variety of colors I had never seen,” he says.
Like many gardeners in the era, he had only grown hybrid tomatoes, cultivars which are crossed using traditional breeding techniques.
One day he had an epiphany, inspired by these tasty fruits. Ibsen invited chefs he was friendly with along with others for a backyard celebration of his heirloom tomatoes to spread the word of their culinary superiority. The initial TomatoFest for 50 people grew into an annual event that lasted 17 years in Carmel Valley, Ca., eventually drawing thousands of like-minded tomato lovers from all over the world.
Growing, harvesting and evaluating 650 varieties gets harder for the couple each season.
“I’m getting old enough where I can’t handle that volume because of all the work, we’re probably going to take it down 100. I keep saying that every year,” he says laughing.
But every season more varieties, grown for generations by families, each one with a history to be told, come across his desk. He in turn feels compelled to share them with the world.
“I can’t ignore that story that needs to be told,” he says. “The primary reason is we want to keep these varieties from disappearing, to keep the family and cultural stories alive.”
For 25 years, they’ve built a seed bank of heritage varieties of tomatoes, each cultivar special in its own way. 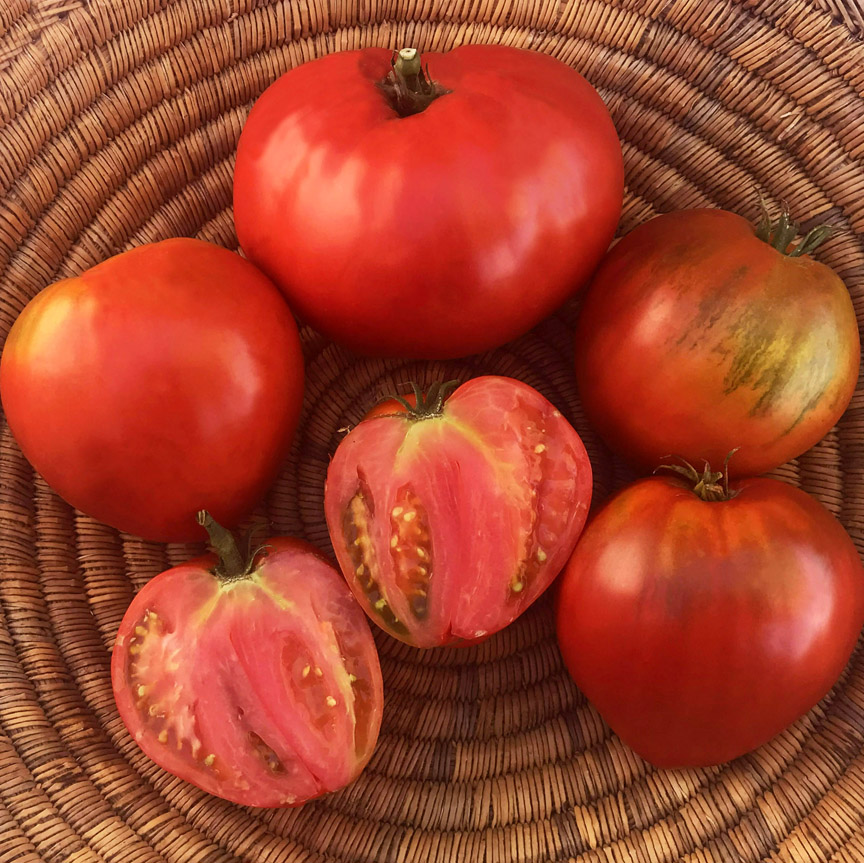 ‘Anthony’s Passionate Heart’ is a tomato named for the late chef and television Anthony Bourdain.

This season, Ibsen and Lacey have added ‘Anthony’s Passionate Heart,’ a particularly important tomato named in memory of the late chef and television personality Anthony Bourdain.
“I really like the man,” Ibsen says, “what he did and how he offered a life exchange through different cultures and different places through the foundation of a food experience, I wanted to honor him somehow with a tomato.”
He put the word out to different tomato growers looking for something that wasn’t named yet that would be spectacular enough to be named for Bourdain.
Noted breeder Jeff Dawson had a variety that he worked on for seven years which might fit the bill. It’s a cross between ‘Sungold and ‘Amish Paste’, which produce one-pound fruit.
“I love them,” Ibsen says of the tomato. “It’s a heart-shaped tomato, a big red variety. They have that boldness that Anthony Bourdain was known for and have the flavor that I really like.”
He chose this tomato over another Dawson offered due to its taste, production and habit.
“I wanted to see something that would have a legacy, way beyond anybody possibly remembering who Anthony Bourdain was,” he says. “The tomato could contribute a benefit to folks out there. I think it’s one of the most enjoyable ways of gathering people together to celebrate our humanity through food.” 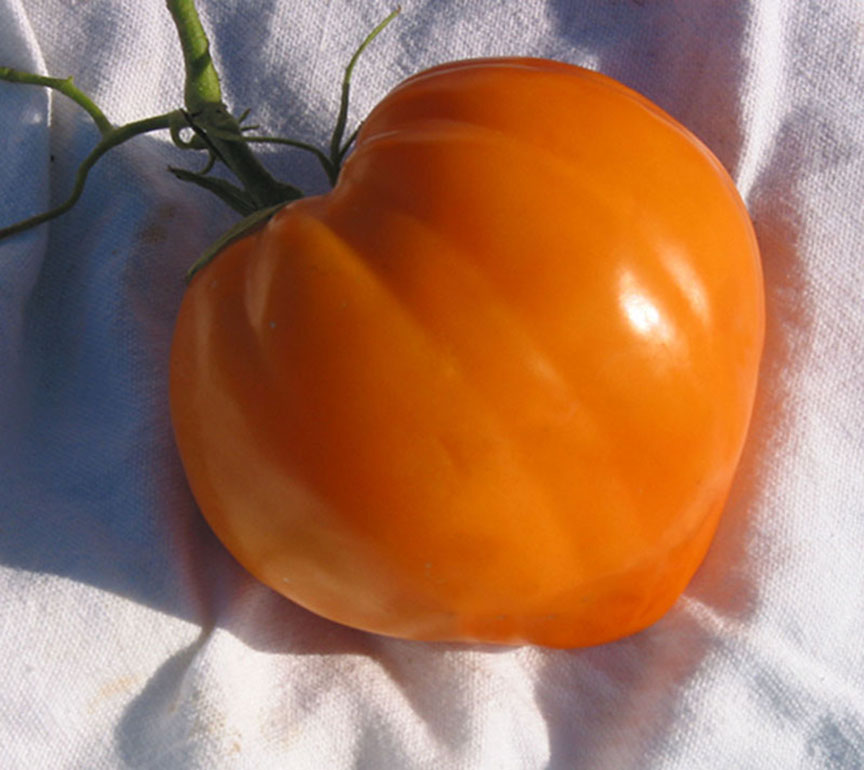 Most of the tomatoes he grows also hold a special place in gardeners’ hearts. ‘Homer Fike’s Yellow Oxheat was sent to Ibsen from one of Fike’s grandchildren 15 years ago. He only grew this variety for decades, no one outside the family or town ever knew about this variety.
“It’s one of our most popular varieties,” he says. “We get notes from the family, they have a family gathering and every one brings the tomatoes they have grown.”
His TomatoFest site is probably the only place to purchase Pittsburgh’s most famous heirloom tomato, the ‘Limbaugh Legacy Potato Top’ tomato.
“There seems to be a cult around the Fred Limbaugh Potato Top tomato,” Ibsen says of the large, meaty pink tomato that has been part of a seed and plant project giveaway since 2000, detailed here. “I love its exceptional complex sweet fruity flavors that also is well balanced by the right amount of acid punch.”
Ibsen and Lacey spend countless hours getting seeds to people in need, too.
“Ninety percent of the seeds we harvest, we give away,” he says.
Urban gardens, school gardens and nearly 400 different charities receive seeds. One example includes five women in India who requested seeds that have now created an economy for the area. They grow the plants and sell the transplants and fruit to feed their village. 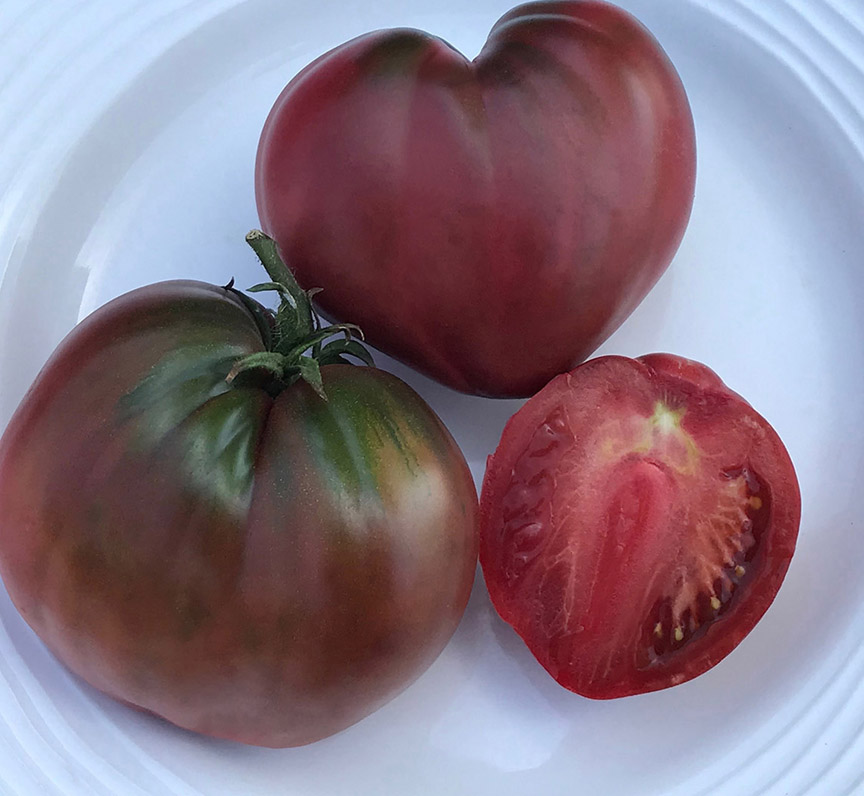 ‘Dwarf Purple Heart’ is part of new series of tomatoes that stay small.

One thing that’s new this year are dwarf varieties he’s added.
“I was overwhelmed with appreciation,” he says of these diminutive cultivars. The plants are big and leafy with a thick stem, very productive, but smaller in stature, growing anywhere from two feet to four feet tall.
“These are really well suited for containers and for growers with less land,” Ibsen says.
They are indeterminate varieties, but will only reach a certain height. The dwarf plants can be grown in something as small as a five-gallon bucket. Younger gardeners are attracted to the smaller varieties as are older growers trying to cut back on the amount of work needed to grow full-sized plants. He’s added 24 new dwarf varieties, even though he’s pledged to grow less.
“I want you to remind me of that over the next couple of weeks,” he says chuckling.
‘Uluru Ochre’ produces 12-ounce black and orange fruit with fantastic, delicious flavors. ‘Dwarf Purple Heart’ is very productive, putting on heart-shaped, purplish/black tomatoes that weigh six to 16 ounces.
“I’m not sure how long we’ll be able to continue,” Ibsen says, “because there’s a physical lot work in the field and trying to keep this many varieties sustained.” 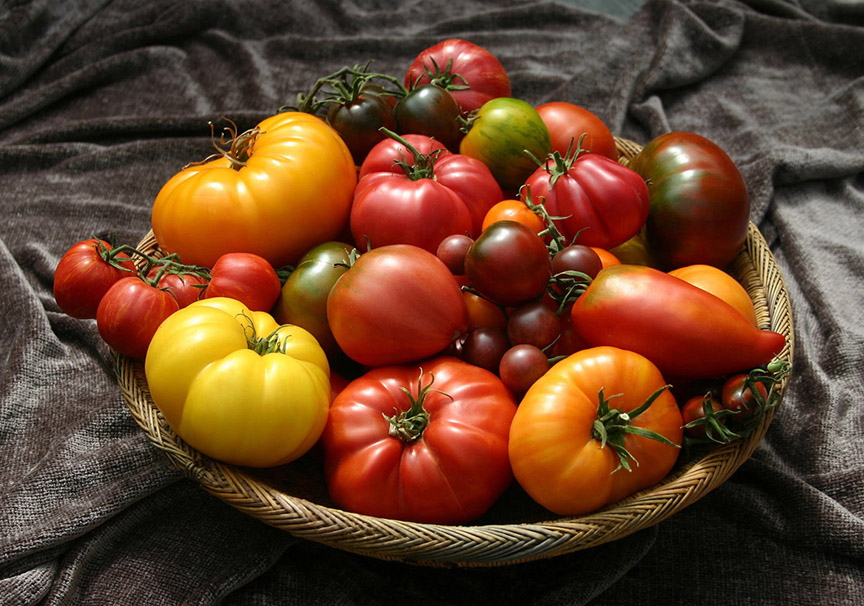 Just a few of the 650 different heirloom varieties offered by TomatoFest.

Some of these worthwhile varieties might only sell two packets a year, he adds, but they are still available for now.
“It might have really great flavor or I have a personal love for the variety and can’t see why they aren’t appreciated,” he laments.
Ibsen encourages gardeners to save seeds of favorites to keep the variety alive.
“Each year I tell my wife, maybe we should pare it down, lets take a look at a five-year plan. She says, ‘I want to keep going,’ so I say, ‘Let’s keep going.’”
The couple plant and harvest thousands of plants and when asked why he persists, Ibsen responds, “The love of it, we love our lifestyle of being growers of healthy food and being advocates of the organic food movement, as well as protecting the diversity in our foods. It’s a mission.”

More about tomatoes from Everybody Gardens

A special garden for a special person.

How to save tomato seeds.