A special garden for a special person

Jenny Hall is beaming as her 9-year-old son Reid talks about his favorite recipe from the garden at the kitchen table. At the other end of the table, his grandparents Dick and Jane Sylvester are also transfixed by the precocious young man. Reid has spinal muscular atrophy, a genetic neuromuscular disorder that has him using a wheelchair. Reid’s smile lights up the room as he discusses his No. 1 summer lunch.
“Whenever we have the tomatoes,” he says with a smile. “I like to make a Caprese sandwich.”
It’s a combination of garden tomatoes, balsamic dressing, basil and fresh mozzarella, and the young gardener can’t get enough.
“I have a half every day, it’s really good,” he adds.
“It’s true,” his mother says with a laugh. 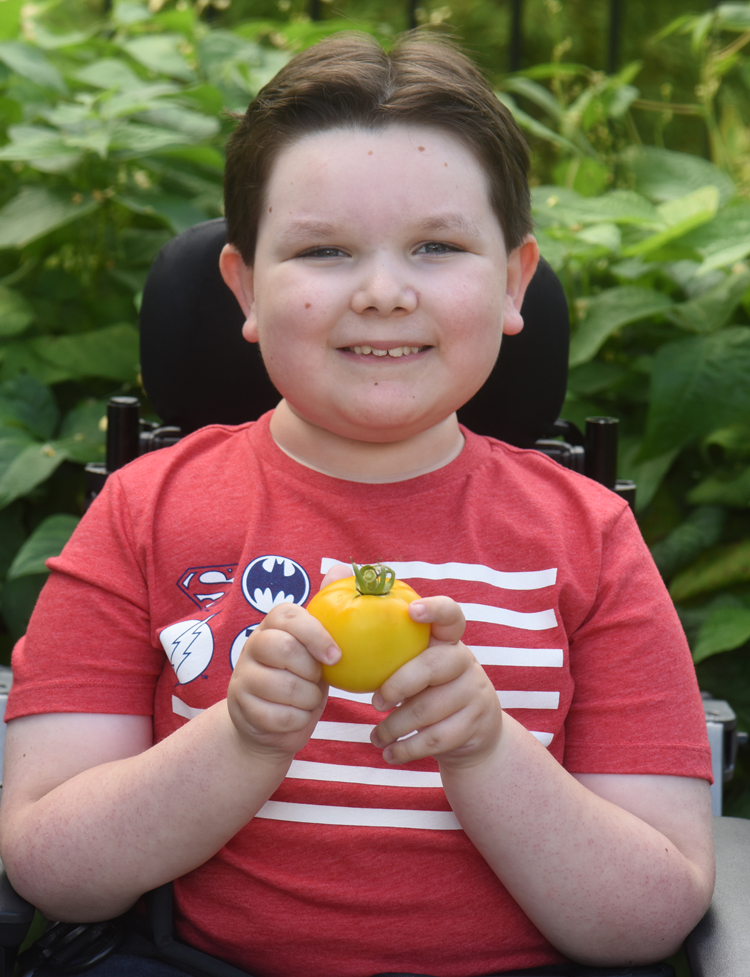 Reid Hall, 9, shows off a yellow tomato he picked out of the family’s raised bed garden in Allison Park. Reid has spinal muscular atrophy, a genetic neuromuscular disorder. He enjoys being in the garden and loves the produce too. Photos by Doug Oster

The entire house has been designed to be accessible to Reid, something his mother and father Chris were determined to do. That also includes the garden.
“We built this house with the premise that wherever we could go, he could go,” Jenny says. “To help him enjoy the things we can do too. There was no question we were going to do raised beds so he could be a part of it.”
The beds are teeming with vegetables, and Reid is in his glory seeing the yellow tomatoes he loves reaching fruition. There’s also his grandfather’s ‘Rutgers’ tomato plant, a plum tomato, peas, cucumbers, zucchini and more growing in the three beds. 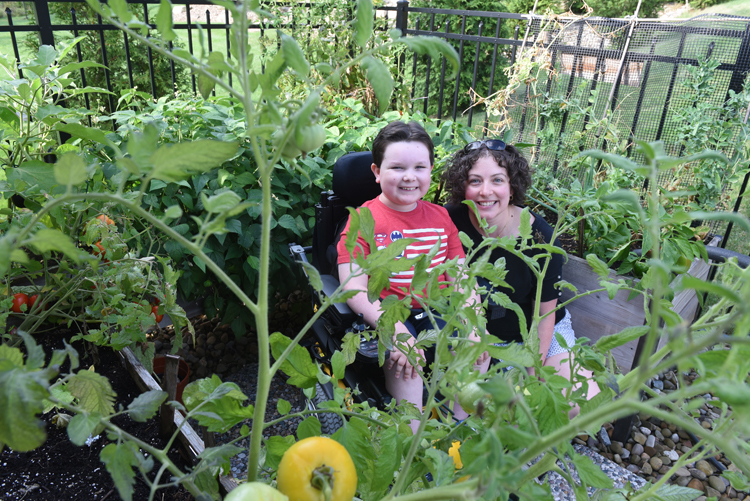 This is a gardening family, as his great grandfather ran Stirling Nursery in Valencia, Butler County. Jenny grew up gardening under the tutelage of her parents and understands the lessons a garden can teach her son.
“Seeing things grow, knowing where food comes from and maybe broadening his likes. I think it’s worked,” she says, looking over at Reid.
Last year was their first garden and, like most gardeners, they planted too much of a good thing, cramming eight tomato plants into the wooden beds. “I kept on telling her, too many, too many, too many,” her father Dick said with a laugh.
To add insult to injury, Jenny got it in her mind that each tomato plant should have a basil plant grown in consort to reduce insect problems. Then there were literally buckets of beans harvested too, which are not one of Reid’s favorite veggies.
“It just got a little out of hand,” she said laughing. “Every year we learn, figure out what we like and what we don’t like.”
She’s passing on her love of the garden to Reid, something her parents appreciate. Jenny remembers picking peas with her older sister as children and then getting called over to the neighbor’s house to hear long stories of days gone past. By the time they headed for home, most of the peas were gone. She also related a story that demonstrates there’s no doubt she’s from a gardening family.
“We always would have our family wiffle ball games on the other side of the garden. If the ball went in the garden, it was an automatic out,” she says smiling.
“We’re proud of her,” Jenny’s mother Jane says about the raised bed gardens.
“I didn’t see it as a chore,” Jenny says of gardening as a kid. “I thought of it more of just being outdoors.”
After listening to the stories, Reid captivated his family by saying, “Whenever I grow up, I’m going to get my kids a garden.”
As everyone smiled, he continued to talk about the things he loves from the garden like cucumbers and the amazing dill pickles his mother makes, although they do have one drawback.
“Whenever I eat anything with dill, it makes me sweat,” he says with a straight face, which brings laughter from those around the table.
“That’s his diagnosis,” Jenny says still chuckling. 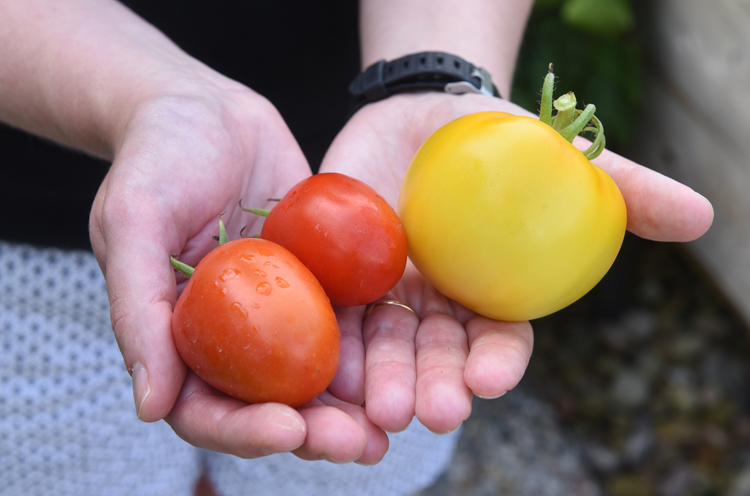 Jenny Hall shows off a harvest from the family’s raised bed garden.

The way the raised beds are constructed, Reid can reach in to pick what he wants. He’s not big on getting his hands dirty but enjoys the different treats that are harvested from the garden. Another favorite is the eggplant his mom and dad combine with other things for roasted vegetable sandwiches.
“It’s really fun, and there’s lots of colors,” Reid says of the beds. “My favorite color is green and everything in the garden is green; I like it a lot.”
His family has made sure that the gardening gene gets passed down to one more generation by creating a space he can enjoy like all gardeners.
“I just think it’s important that everything is accessible to him,” Jenny says. “It’s something we do as a family, I can’t imagine having a traditional garden, where he could see it, but not touch it or experience it and that’s the important thing.”

This is the second of an occasional series on gardening with challenges. The first story focuses on John Staudacher, who gardens while dealing with Parkinson’s disease.