Succession planting of tomatoes and other plants prevents diseases and pests

The temptation to plant early is an urge that seduces all gardeners. It fools the most knowledgeable and thoughtful growers and turns them into careless dreamers who throw caution to the wind in the quest to see the first bloom or harvest the earliest fruit. 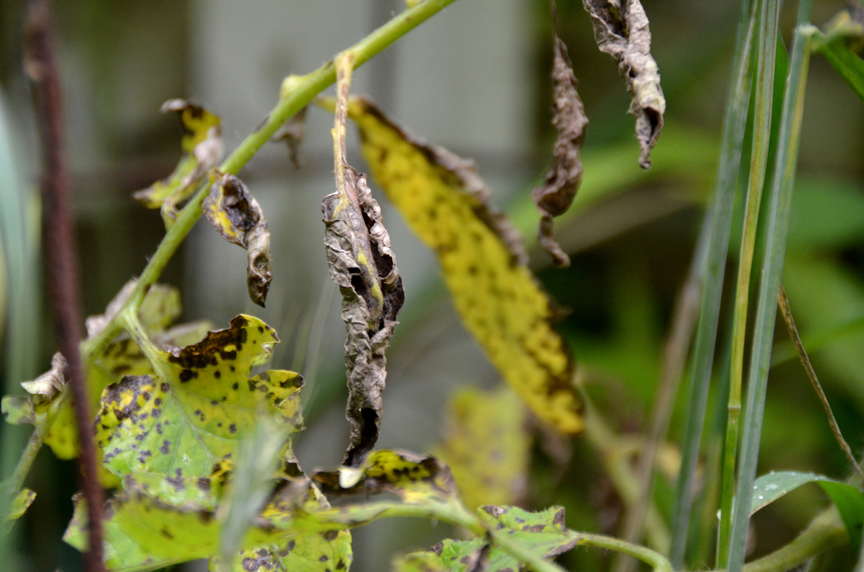 Septoria leaf spot is a common tomato problem. With a wet spring, tomatoes are showing signs of the diesease. By planting some varieties later, these early fungal issues can be avoided. Photos by Doug Oster 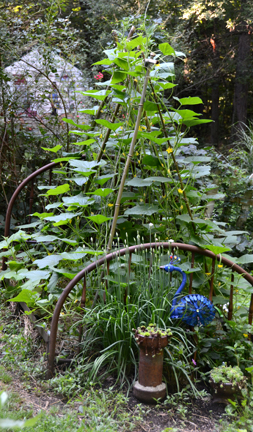 Growing vine crops like these cucumbers up a trellis saves room and keeps the plants off the ground and away from the cucumber beetle.

In March while visiting Chapon’s Greenhouse in Baldwin in search of the earliest cold weather transplants of beets and lettuce to use for an upcoming In the Garden video shoot, I was enticed by some small ‘Early Girl’ tomato seedlings.
I’ve never had any tender plants like that in my unheated greenhouse that early but figured why not? If they meet their demise at the icy hands of Mother Nature, then so be it. The familiar aroma of the foliage after the slightest brush of my hand had me reeling.
Temperatures outside only dropped to about 24 degrees, and the greenhouse did its job, barely keeping the seedlings alive. They’ve been transplanted to bigger containers a couple of times and now are tall, gangly and flowering.
My dearest garden friend always complains that I’m a cheater when it comes to tomatoes, and she loves to bust my chops. My answer is always the same: “There’s no crying in baseball or cheating in gardening.” Why have a greenhouse if not to take advantage of the space?
My main crop of tomatoes is never planted in the garden until Memorial Day, because that’s when mom said we should get the job done.
Even then, there are lots of tricks to warm up the soil before planting, something that heat lovers like tomatoes and peppers enjoy. Black landscape fabric laid over compost on a bed for a week or two works. I like Wall-O-Water season extenders. They act as a greenhouse, first for the soil and then to keep the plant cozy, too. They surround a plant and have long plastic tubes that are filled with water. The sun heats them up and the water releases energy at night. I also have some old 1970s plastic roof skylights that are placed over beds in advance of planting to raise the soil temperature.
As important as getting started early can be, it’s succession planting that really takes the garden to a new level, especially for any plant prone to fungal disease, such as tomatoes. 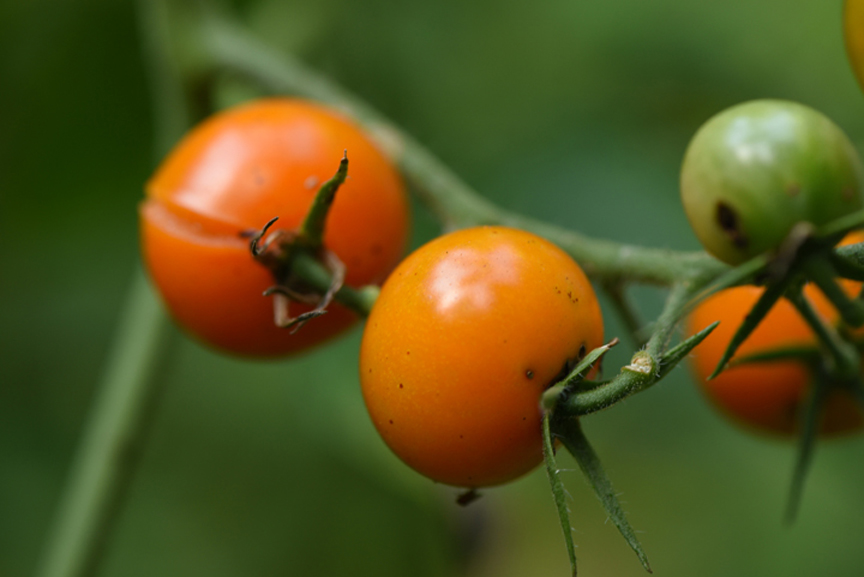 ‘Sungold’ is a pretty orange cherry tomato that’s very sweet. It’s also one of the varieties that puts tomatoes on early. ‘Sungold’ will be ready around 50 days after transplanted into the garden. I plant it early in the season, but also late. Tomato plants love warm soil and an early variety like this one will be ready by the end of the season and much less susceptible to fungal diseases.

Over the past two or three seasons, rain has been plentiful. Those cool May nights, combined with lots of rain, are the perfect storm for the two most common diseases that plague the plant. Early blight and septoria leaf spot cause the leaves to turn yellow, brown and spotted, beginning at the bottom of the plant and working upward. Although they rarely kill the plant, the pathogens slow it down. The spores are soil borne and are always there. The plants are infected early in the season, and the diseases usually manifest themselves in the heat and humidity of early summer.
By saving room in the garden, and planting over a period of months, the diseases can be foiled. We’ve all been told over the years that tomatoes need to go in the ground as soon as possible to be able to harvest fruit by the end of the season, but there are early season tomatoes, like ‘Early Girl,’ ‘Sungold’ and ‘Fourth of July,’ just to name a few, that don’t take as long to produce.
After the first planting, continue to put a plant or two in through the spring and into summer. My last planting is on July 4, with the quickest producing tomato varieties I can find.
Another tactic that will help slow the disease includes mulching at the time of planting to retard the spores below from splashing up onto the lower leaves. Removing some lower leaves for more distance between the spores and leaves is also recommended.
Grow lots of different varieties of tomatoes, as each one reacts differently to fungal issues. Use an organic fungicide like Serenade to prevent the disease. Fungicides always are more effective when applied before signs of damage.
Give plants plenty of space between each other for good air flow, and grow them up stakes or in large cages.
Not just for tomatoes
Succession planting isn’t just for tomatoes, as many other crops benefit from continual planting. Lettuce planted in April won’t be there in July when the tomatoes are ready. Seeds can be sowed every couple of weeks for lettuce and many other greens to keep the plants coming all season.
Bush beans, Swiss chard, beets, carrots, other greens and cole crops like cabbage are all candidates for succession planting.
Cucumbers are the second most important crop for the technique besides tomatoes in my garden. They can be planted in mid-May, the end of the month and into June. Often times the first planting will be chewed on by cucumber beetles. The damage isn’t that bad, but the pest can infect the vines with bacterial wilt. When a cucumber plant looks great one day, then wilts and can’t be revived with water, chances are it’s been infected with bacterial wilt, which is fatal. Staggering plantings and growing the vines up a trellis will help defeat the beetle.
Succession planting will diversify the garden, extend harvest times and is a more reliable way to garden.