A lifetime of gardening together

Glenn and Phyllis Ribblett have spent a lifetime together gardening, both inside and outside.
When the couple moved into their Baldwin home 52 years ago, there was no question the two would garden, but there was always a division of labor. He was in charge of the vegetables and she surrounded the house with a tapestry of blooms.
“This was a showcase,” Glenn remembers. “It was filled with flowers on all three sides.” 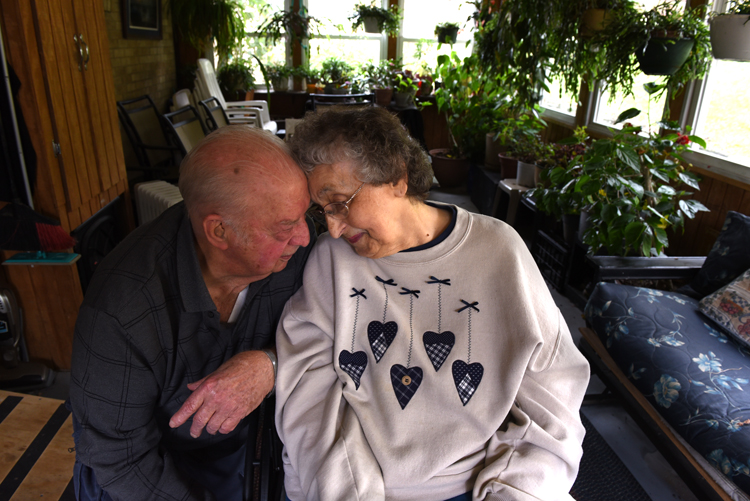 Glenn and Phyllis Ribblett of Baldwin have had to change the way they garden over the years. Phyllis had a stroke two years ago and Glenn is partially blind. Photos by Doug Oster

Phyllis credits her parents and grandparents with inspiring her to garden as she grew up on a farm in Clearfield.
A little over two years ago Phyllis had a stroke. She has been making progress in her recovery, but can’t garden anymore.
“Now I just supervise,” she says with a smile. “It’s very hard to lose the ability to be independent.”
Sitting in a wheelchair at the dining table, Phyllis talks about what the garden means to her.
“There’s just something about flowers, it’s a good feeling,” she says. “It’s very satisfying, you don’t ask for anything from them, they don’t ask anything from you but for water. To me, flowers make a house a home.”
Glenn is inquisitive when given instruction from his wife, often questioning when he’s told what to plant and how to plant it. Phyllis’ response is time honored, “Because I said so,” she says firmly. “He doesn’t like that answer,” she adds with a chuckle.
Glenn is partially blind, able to see shapes and colors and not a lot of detail, but that hasn’t deterred him from caring for treasures in the garden.
“In two and a half years I’ve only lost one plant,” he says proudly.
Glenn also has a long history of gardening — working in the family greenhouse business in Johnstown since he was 12 years old.
“I do a lot of gardening by feel,” he says.
“I fake it a lot too,” he confesses.
“He doesn’t measure well,” adds Phyllis, which elicits a laugh from Glenn.
Even though his gardening jobs didn’t include the beds around the house, Glenn always appreciated the flowers his wife grew.
“I always liked them as much as she did and did as much as I could to help her,” he says. “This house was completely surrounded by flowers everywhere.”
Recently he dug up enough dahlia tubers to fill three large trays, which are in the sunporch drying. He’ll pack them in wood chips soon for winter storage.
His large vegetable garden, which in its heyday helped feed the couple’s five children, now stands vacant.
Not only did Phyllis garden outdoors, she also had an affinity with indoor plants. Their sunroom is filled with Christmas cactus, oxalis and a host of other plants. The front picture window is graced with beautiful orchids blooming strong. She puts three ice cubes on the plants once a week for watering. Once a month the foliage is fed with a foliar spray. When they flower, “It just makes me feel good,” Phyllis says, “and then other people see them and enjoy them too.” 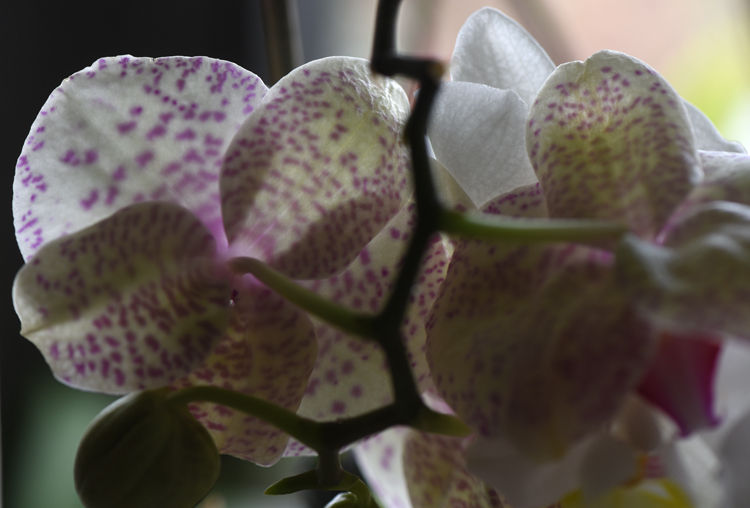 Phyllis loves orchids and they bloom happily on the front windowsill. 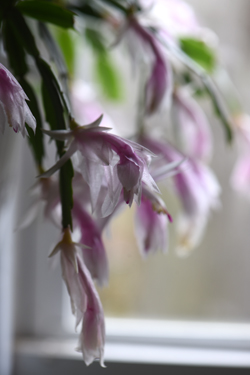 Phyllis loves Christmas cactus too and has them all over the house and on the sun porch.

The Christmas cactus fill windowsills and are in full flower. They used be all deep red, but this season have bloomed white, fading to pink. The most unusual variety might be the plant that blooms with apricot flowers. Phyllis started with one plant of the red variety, took cuttings and now has 20 plants thriving in the house.
The heated sunporch is a place for the houseplants to live, but also anything in pots that needs protection over the winter. The plants are all safely growing there now and will be put back in the garden in May.
Getting old isn’t easy, the couple says, but both are upbeat about aging. Glenn, 85, has battled skin cancer and had a bad concussion after a recent fall.
“We’re kind of a mess,” says Phyllis, who is 87. “He can’t see or hear, we have to have a calendar with all our doctor appointments.”
Glenn takes the responsibility of caring for his wife’s flowers seriously.
“I’ve just been lucky,” he says. “I didn’t know for zilch about taking care of her flowers and I had to learn quick.” 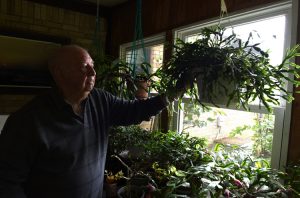 Glenn looks at one of the many Christmas cactus plants that grow in the sun porch.

Robert Slabe lost his wife and cares for her plants in this touching story.

This family has been caring for a Christmas cactus since 1912.