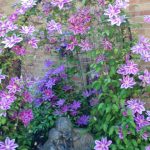 Sister Janice Blados of the Sisters of the Holy Family of Nazareth is thrilled with beautiful blooming clematis vines climbing an arbor in front of the dining room at Holy Family Manor in Bellevue. They are growing over a statue of Jesus, Mary and Joseph at the senior care facility and have taken a few years and prayers to see the plants come to fruition. When asked if she did anything special to get the plants to thrive, Sister Janice says, “holy water,” with a hearty laugh.

One of the plants is seven years old, the other two were planted three years ago. She found them on sale at the end of the season, paying just a few dollars for the two youngest plants. “They were half dead, she said, we nursed them back to health.” In a near disaster, the vines were accidentally cut to the ground by some well meaning teenage volunteers two seasons ago who mistook them for weeds. Although herself and Sister Janice Fulmer who also cares for the garden feared they were dead, the plants returned sparsely last year and thrived this season. “This year they were spectacular,” she said.

She feeds them with a homemade concoction of three cups of alfalfa pellets mixed with five gallons of water. Pellets are put into something permeable like pantyhose and left to steep in the water for three days until the mixture is the color of tea. Sister Janice also scatters some Osmacote slow release fertilizer at the base of the plants.

The vines are happy with morning sun and afternoon shade, she says, “the roots are pretty shaded, I think that helps a lot,” she added.

The garden will change through the season as the clematis gives way to gladiolus and annuals which are watered by one of the elderly residents and enjoyed by many others who live there. “It’s nice to see the senior residents come out and see it, she says, it kind of puts them back in touch with beauty and creativity.” Many will reminisce about the gardens they tended before coming to Holy Family.

“It’s really kind of a therapy for us, she says of working in the garden, and it brings us back to nature and god’s creation.”

Here are some pictures of the clematis throughout the last few years: