What garden pros think you should plant this year

It’s been nearly a decade that I’ve been making the trek to Baltimore for the annual Mid-Atlantic Nursery Trade Show. It can be overwhelming with more than 1,500 booths, filled with everything you could imagine for gardening. There are new plant introductions, products and nursery stock everywhere for garden centers to consider for the upcoming season. This year’s show celebrated 50 years of showcasing the best plants and garden products.

After a day exploring the show and finding lots of fodder for upcoming stories, I had an epiphany, wondering out loud what these experts grow that they love, and what they wished gardeners would grow. I enjoy picking the brains of growers and other pros who have spent their lives around plants.

When I asked that question, some didn’t know what to say or wanted to think about it for a while. There was nothing scientific about who I was choosing to talk with, just rambling around the Baltimore Convention Center floor looking for plants or people who struck my fancy. 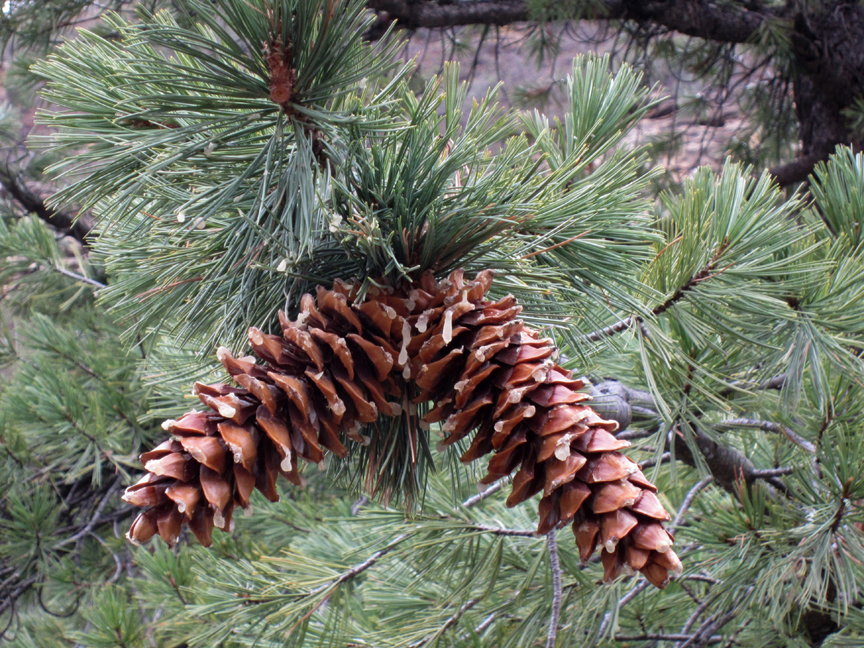 When I stopped to see my old friend David Smith from Pikes Peak Nursery in Penn Run (near Indiana, Pa.), it didn’t take him long to answer.

“One thing I’ve been growing for a lot of years, because I really like it, is Southwestern white pine or Pinus strobiformis,” he says.

It’s similar to the Eastern white pine seen growing just about everywhere, but it has interesting differences.

“The needle is a little stiffer, it’s a lot bluer,” he says of the Southwestern white pine.

It’s a great yard tree, he adds, and also a wonderful, unique choice as a Christmas tree. It will get large, reaching 40 feet or more at maturity. Smith says it’s perfect for the holidays when it’s about eight feet tall as it holds on to its needles. It’s a tree he’s grown for more than two decades, but landscapers, homeowners and Christmas tree growers haven’t caught on.

“It’s a minor player,” he says, a little disheartened.

There’s one more fascinating bonus he wants gardeners to know about the tree.

“If you like to grow a tree for something really unusual, the seed is edible,” he adds with a smile. 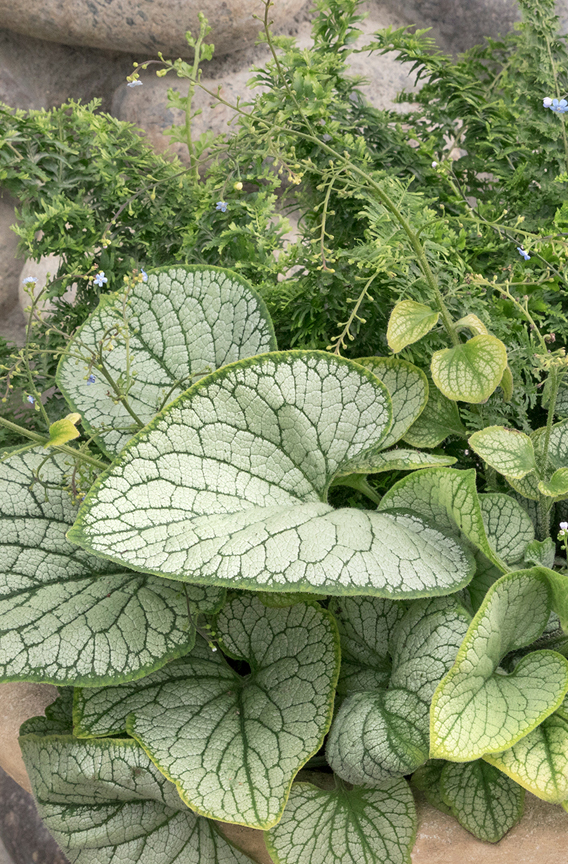 Brunnera ‘Silver Heart’ is one of the plants discovered at MANTS.

Joel DiBernardo, head grower for Creek Hill Nurseries in Leola, Pa., was also quick to pull a plant from the wall of foliage behind him at the company’s booth.

“This is Brunnera ‘Silver Heart,’” he says while holding the thriving plant. “This is a unique plant in that it’s good for dry shade. It has that wonderful silver foliage which lights up as an understory planting under a tree.”

The plant is known for its toughness and beauty. It’s hardy to zone four, and the silvery heart-shaped leaves are held anywhere from six to 12 inches above the base of the plant, which can reach two feet wide.

“Every gardener should have it. It goes well with coral bells and different plants you would put under trees,” DiBernardo adds. 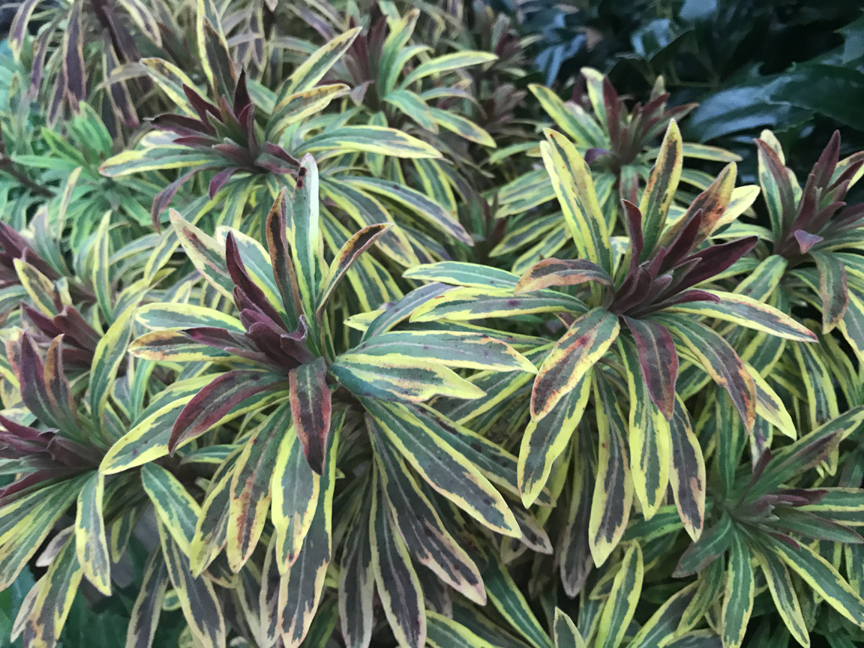 The stunning foliage of perennial Euphorbia x martinii ‘Ascot Rainbow‘ (also referred to as Martin’s Spurge) is displayed right in front of the Ingleside Nursery booth, and even though Eric McKenney is too shy for videotaping, he’s willing to talk about the plant.

“As you see, it has very colorful foliage,” he says looking down at the plant. “It’s rated for zone six through 11, exposure is full sun to partial shade and has nice bloom in spring, its green color.”

The plant gets from 24 to 36 inches tall when mature. 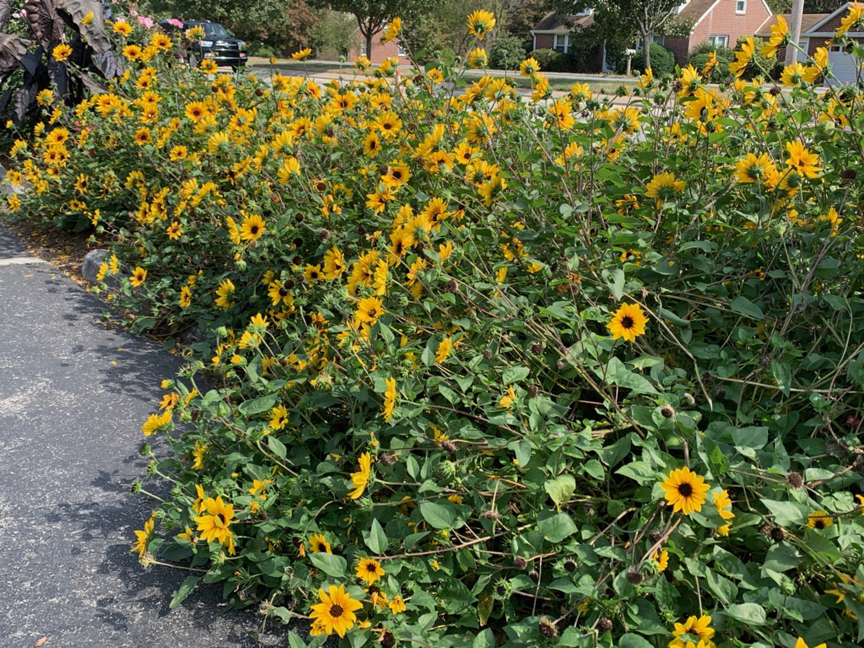 Brett Cromly from Monrovia is excited about an annual that was introduced last season — the helianthus ‘SunBelievable.’

“We guarantee 1,000 blooms on it,” he says. The compact annual grower will get three feet tall and wide, bloom from frost to frost in full sun and tolerates drought, too.

“It’s a sterile plant,” he says, “so it’s putting all its growth into flowers.”

A tall ‘Dragon Slayer’ holly tree dwarfs John Machen from Mobjack Nurseries out of Virginia. The company has good luck with ‘Dragon Lady,’ but its cousin ‘Dragon Slayer’ has one big benefit. It has the same format, hardiness and deer resistance, but it’s much better thriving in wet conditions, Machen says.

The plant has a pyramidal shape and will get about 15 feet tall. 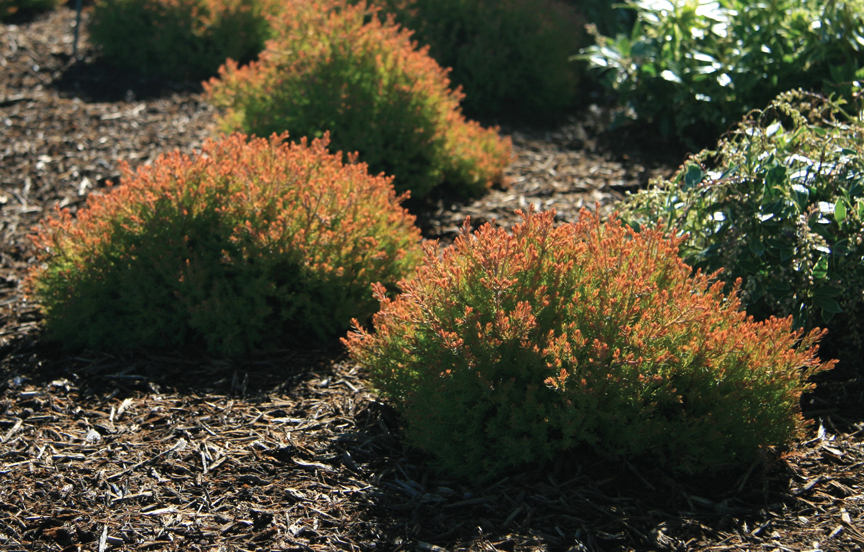 Fire Chief Arborvitae won one of the plants garden pros recommended to grow.

It took me three visits to the Alpha Nursery booth to get an answer from Scott Tarris of Greensburg. He originally thought I asked about his fantasy for a plant and told me a “slug-resistant hosta.” I misinterpreted him, thinking he knew of a hosta that slugs wouldn’t go after. We both laughed about our miscommunication, but when I returned to the display he showed me a unique plant.

“There’s a very nice evergreen that many people do not yet know about. This is a ‘Fire Chief’ arborvitae, Thuja occidentalis,” he says.

It will mature to three to four feet tall and wide over a decade. It has a globular habit that doesn’t need a lot of pruning to keep its shape. It’s also a low-maintenance plant with few insect or disease problems.

“This variety maintains a nice deep, dark, orange, coppery color,” he says of ‘Fire Chief.’ “The colder it gets the more reddish this plant gets.”

These are just a few of the interesting plants discovered at MANTS. In the next few months, I’ll be writing about many more plants and products uncovered at the show.

Finding new and wonderful things for the garden is one of the best parts of my job.

How to grow a windowsill herb garden.