The soothing sounds of running water surround Scott and Catie Walsh as they hold their 7-month-old daughter Amara in their Sewickley Hills water garden. 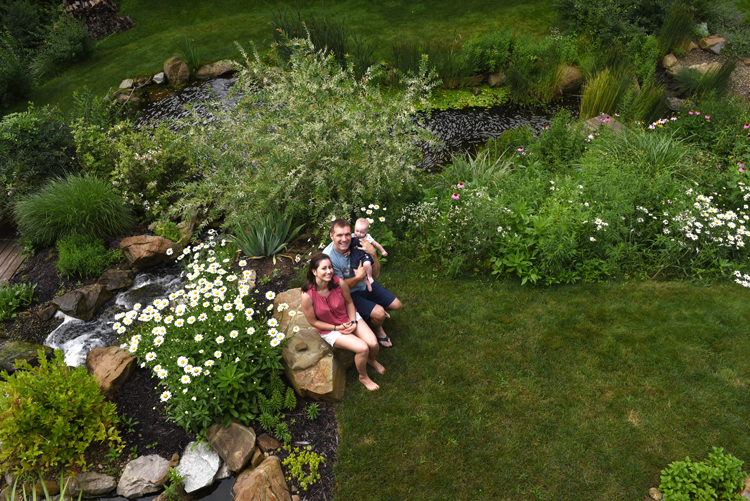 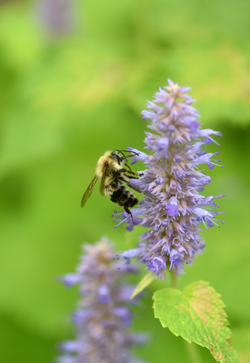 Scott and Catie Walsh of Sewickley Hills have a wonderful water garden that’s part of the Wexford Pond Tour. ‘Golden Jubilee’ agastashe is covered with bumblebees, its a great, fragrant pollinator plant.

The family loves the outdoors, spending countless hours around their pond garden. When they moved here three years ago, the backyard was a steep slope that was almost impossible to care for.
It was landscape architect Kevin Soergel who worked with the family to come up with a plan for the meandering stream, waterfalls and pond to convert the area into something the family could enjoy.
“It was disentangled, unusable space,” Scott Walsh said, looking over the landscape that’s now become a showplace.
Wildflowers sway gently in the breeze as water cascades down to the pond.
“It makes you feel like you’re part of nature,” he said.
Part of his gardening education came from Soergel, but he has experimented on his own with design and plant choices.
Prostrate deep red sedum flowers ramble over rocks at the edge of a path. Bumblebees feast on “Golden Jubiliee” agastache, which release their anise-like fragrance when brushing against the plant.
“Starburst” mountain laurel is one of his discoveries, too. It has star-shaped burgundy flowers and was planted in the back of the property. The plant reminds him of the long hikes he has enjoyed with his wife, he said.
Walsh uses deer repellent, which allowed him to actually see it bloom this spring. The deer are part of the landscape here, but smart plant choices have kept the garden thriving.
“It’s crazy. Last year, I saw a deer get in there,” he said of the large pond “Both feet in the water and dunks his whole head underwater.”
He also has added some interesting water plants as a way to add his own touches to the landscape.
Walsh stumbled onto Hino-Crimson azaleas when living in New York. A landscaper shared the plant with him. The dwarf shrubs will be filled with luminescent red flowers in spring.
He also lugged one-half ton of flat stones to the back of the property to build a patio, which faces back at the expansive garden.
“I love doing stuff myself, it’s a small project,” he said.
He partnered with Soergel to create a rustic arbor from branches and trees harvested from the woods. A climbing hydrangea is working its way up the supports.
He knew the scope of the huge project was beyond his skill level and recognized Soergel was the man to create the large water garden.
“Having someone like Kevin, the expert, come in, he knows exactly what to do, remarked Walsh. “And there’s the creative genius part of it … ideas we never would have come up with.”
Even though this garden if relatively new, it looks as though it has been here for decades.
The Walsh’s continues to learn about gardening, adding plants as needed to build the landscape. They use the garden as a therapeutic respite. 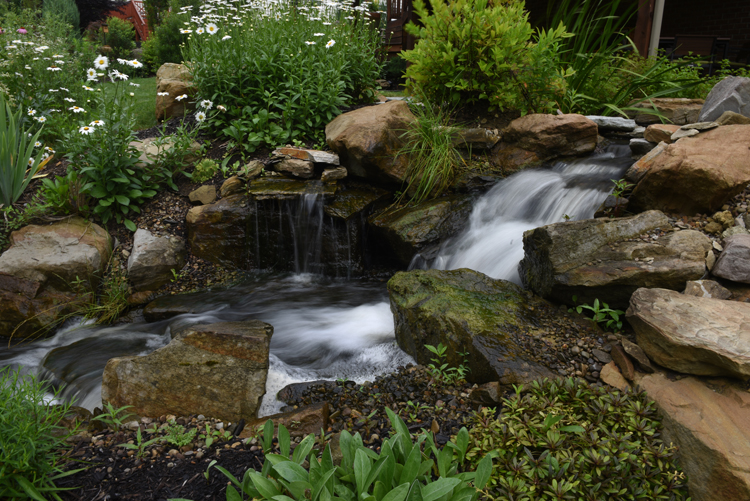 Scott and Catie Walsh of Sewickley Hills have a wonderful water garden that’s part of the Wexford Pond Tour.

“That was our main thing,” Walsh said, “to have kind of a retreat. We really wanted to use the landscape and just have an area that’s really natural. We don’t have to have a cabin house in the mountains. We just go to the backyard.”
They both look at the future of the garden as a way to create a special place for their family to enjoy together.
“Knowing that we wanted to have kids, having something that would bring them a connection to nature that they would love also,” Walsh says of the water garden. “They’ll be able to grow up seeing the frogs, dragonflies and butterflies.” 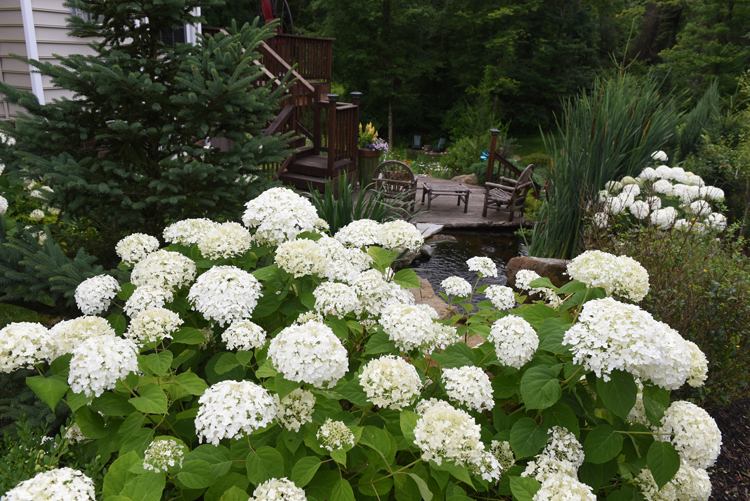 Scott and Catie Walsh of Sewickley Hills have a wonderful water garden that’s part of the Wexford Pond Tour. These ‘Annabelle’ hydrangeas are reliable bloomers that put on a show in the summer.

The Walsh’s garden is one of eight on the Wexford Pond Tour this Saturday, July 14, from 10 a.m. until 3 p.m. Tickets are $36.50 for a self-guided tour and $91.50 for the VIP bus tour and lunch. Proceeds from this tour benefit water projects in drought-ridden North East Kenya. The event is supported by volunteers from Inspired Women Paying it Forward.

Local landscaper has tips for creating a similar garden