Addison Uskuraitis, 11, is painstakingly pulling weeds around a raised bed filled with dinosaur kale. When asked if she would enjoy eating the kale, even served with bacon, she recoiled and responded with a hearty “No!”

It’s the tomatoes growing in another part of the bed of this Vandergrift community garden that has her most interested. But she understands that weeding is just part of gardening.

“It takes a lot of time and is sometimes boring,” she says smiling, “but when you have a lot of people and you have friends doing it with you, it’s fun.” 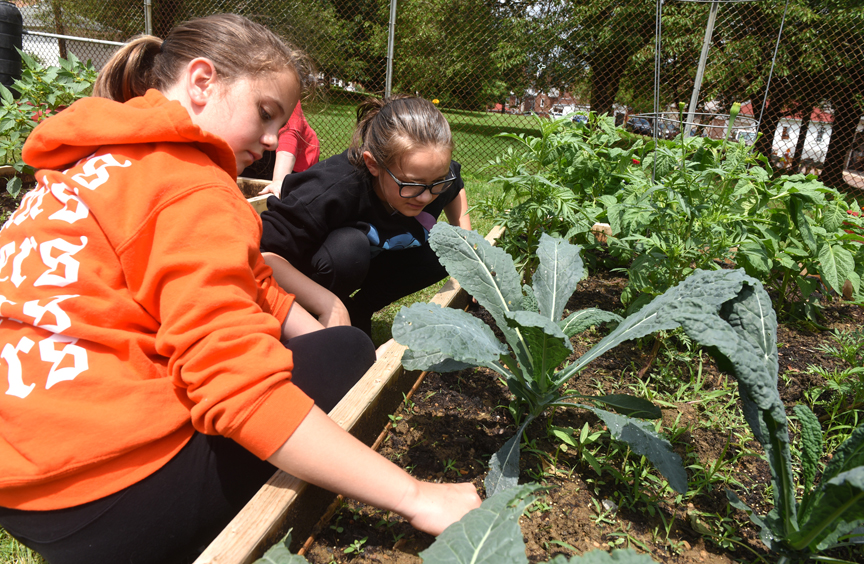 Addison Uskuraitis, 11 and Ella Adams, 10, weed around dinosaur kale in the children’s garden located in Vandergrift’s Franklin Park. It’s a project of the Vandergrift Parent Project. Photos by Doug Oster 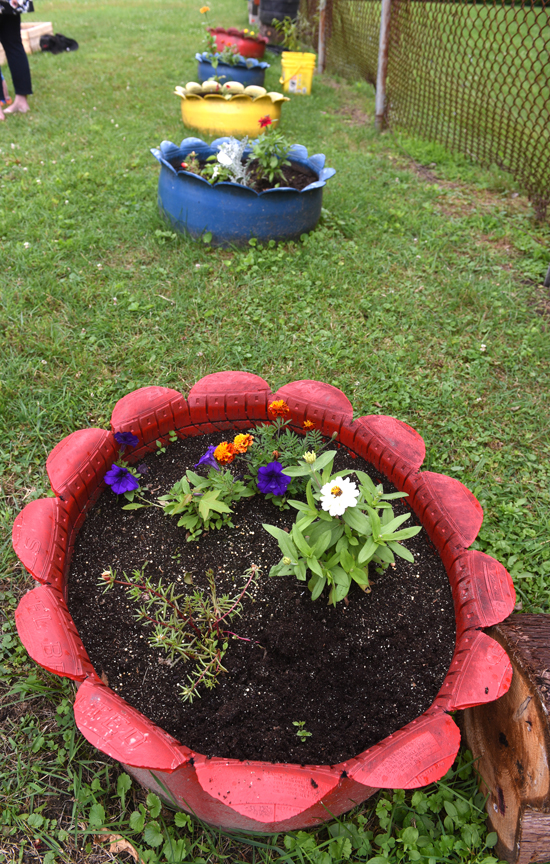 These decorative tires are filled with flowers at the children’s garden in Vandergrift’s Franklin Park. It’s a project of the Vandergrift Parent Project.

This garden is truly a grassroots project. The Vandergrift Parent Project, an organization trying to revitalize the town’s playgrounds and parks, wanted a children’s garden in Franklin Park. They applied for a grant but were turned down. That didn’t stop them as they collected donations from community members and had help from a local company, too.

“We banded together,” Chloe Kruse says, who is a member of the Parent Project. “We just made it happen.”

Kneeling next to one of the beds, she continues to pull the weeds, explaining what she wants the kids to receive from their time in the garden.

“Seeing the kids really understand that they can grow their food,” she says, “that they have a lot of control over what they can eat by growing it themselves.”

The group asked Andrea Woodhall, an Armstrong County Penn State master gardener, to lend a hand to create the garden. It took only four or five hours to build the garden, which was planted the third week of May.

“I wanted to help and be part of this wonderful group,” she says as the group weeded the five raised beds. “We wanted to have a garden that was accessible to the community, especially kids, and teach them how to grow plants that they could take home to eat.”

Donghia Lumber Company donated the wood that surrounds the beds, and other master gardeners and a former Vandergrift resident gifted the rain barrels. They are filled when needed by the local fire company.

The dinosaur kale is accompanied by deep green, stocky tomato plants, green and purple tomatillos, marigolds, pumpkins, watermelon, herbs, peppers, cucumbers, beans and more. Like most gardens, there’s always some critter after the plants. A suspected rabbit is being fenced out under a trellis used to support the beans and cucumbers.

Along the edge of the garden are colorful painted tires filled with flowers. 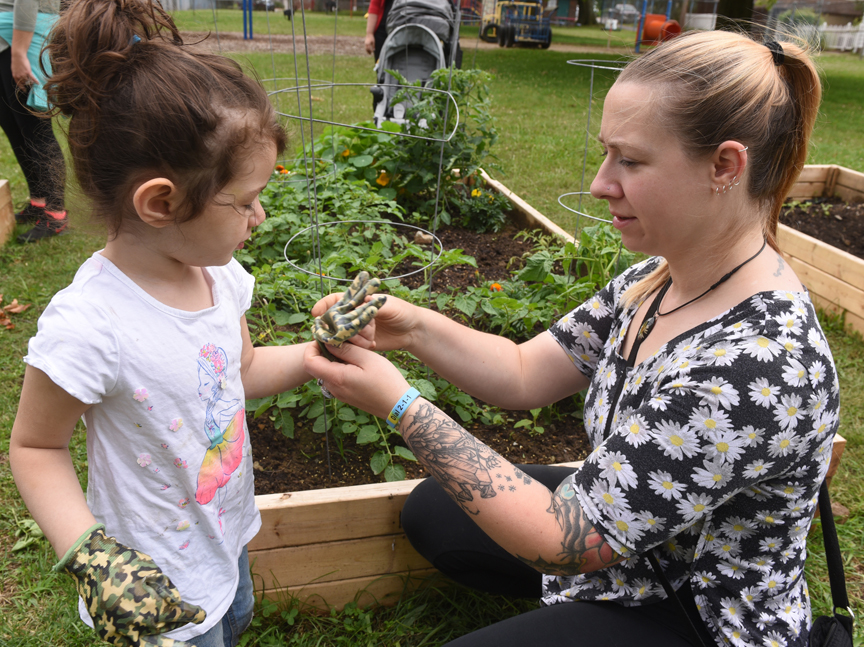 Rowan Roberto, 3, gets help putting on garden gloves from Chloe Kruse of the Vandergrift Parent Project in the children’s garden located in the town’s Franklin Park.

Even 3-year-old Rowan Roberto wants to help as Kruse helps her put on some garden gloves decorated in a camouflage motif.

As Woodhall watches the children working hand in hand with the adults, she discusses what drew her to project. “Seeing everybody come together for one main purpose,” she says.

The kids are excited about playing around the garden too while others weed. Woodhall wants them to get a deeper meaning from digging in the dirt.

“I hope they learn to appreciate what they’re eating by growing it,” she says.