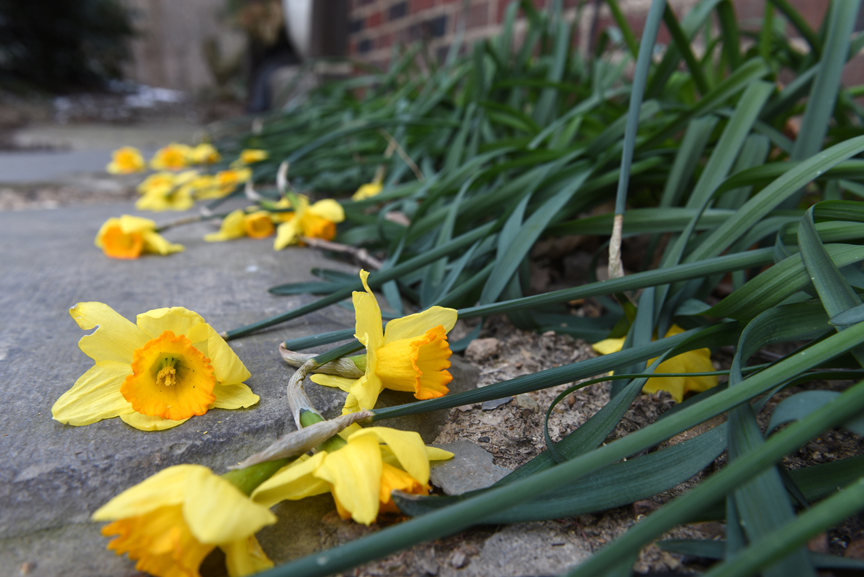 These early blooming daffodils take a beating when the weather turns cold. They were planted by a gardener before Doug Oster moved to the property. When the weather warms up, they will actually stand up again. 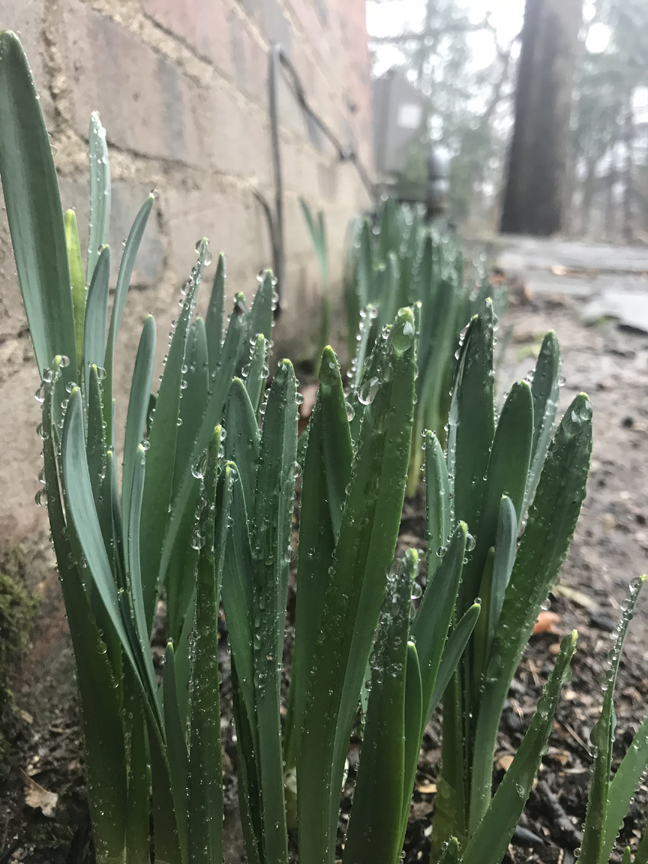 Every year these daffodils emerge too early. To their credit, they've bloomed every season for the past 21 years. 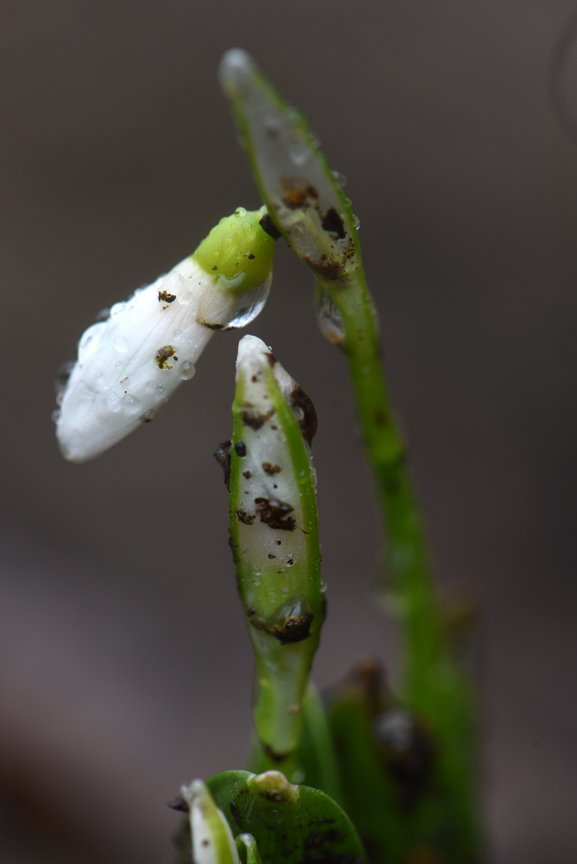 Snowdrops are one of the first spring bulbs to sprout in winter. They love the cold weather, but not every bulb does. 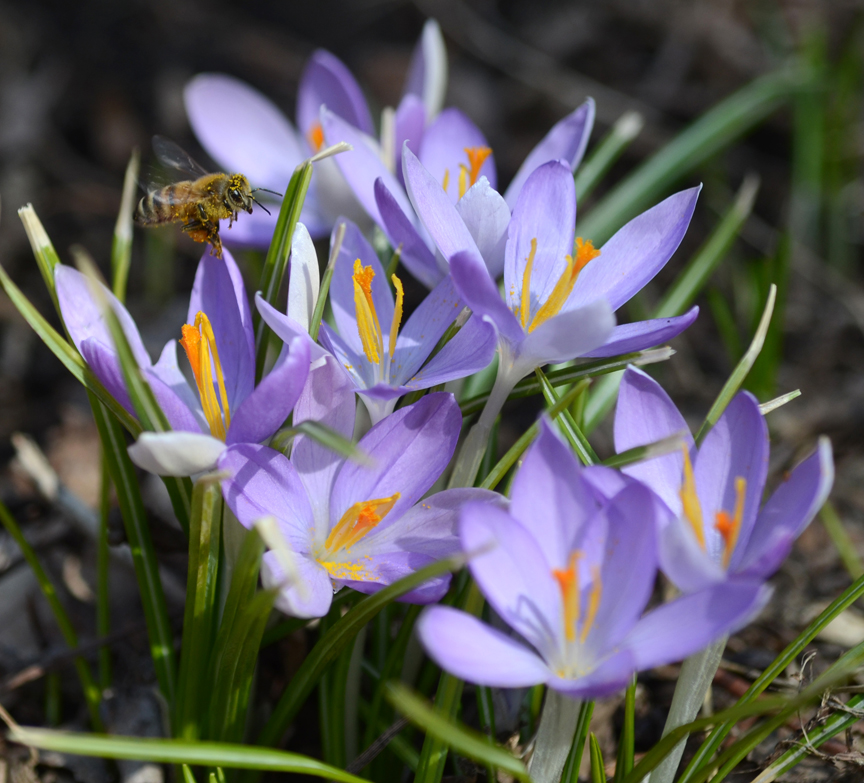 There's still time to plant bulbs like these snow crocus. Not only will they bring joy to the gardener, they are also a good early source of food for pollinators like this honeybee. 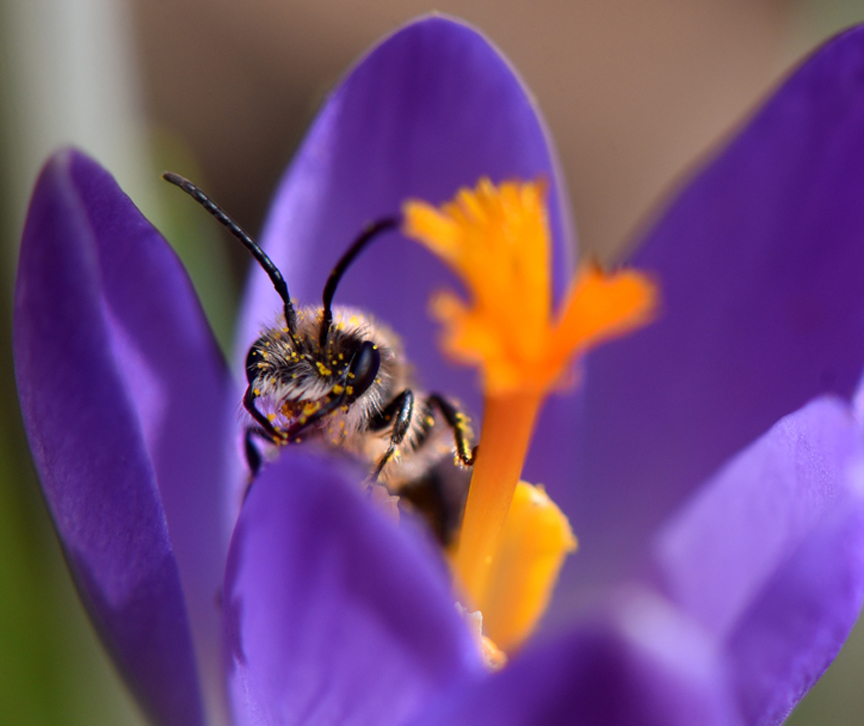 A small native bee is covered with pollen while visiting a snow crocus on a warm afternoon. The next day the flowers were covered in snow. 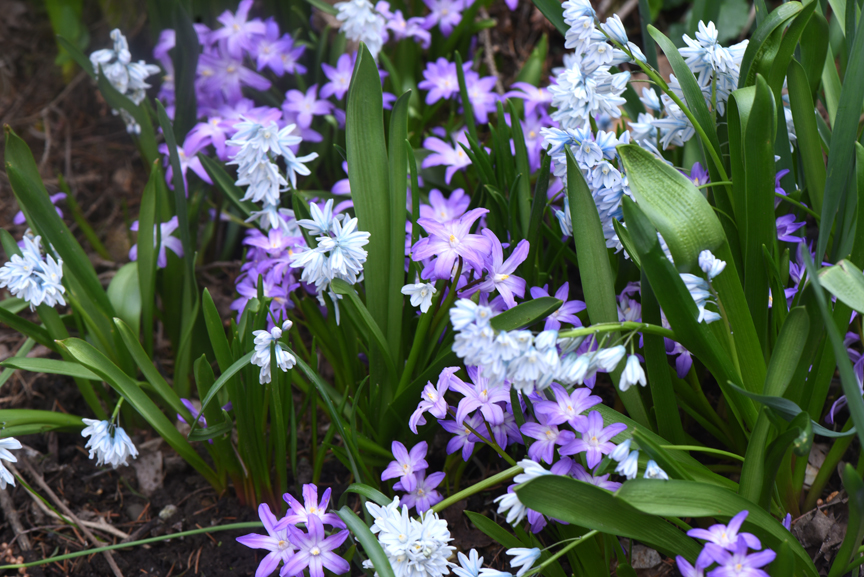 My favorite beautiful accident in the garden. Glory of snow 'Violet Queen blooming in consort with puschkinia. 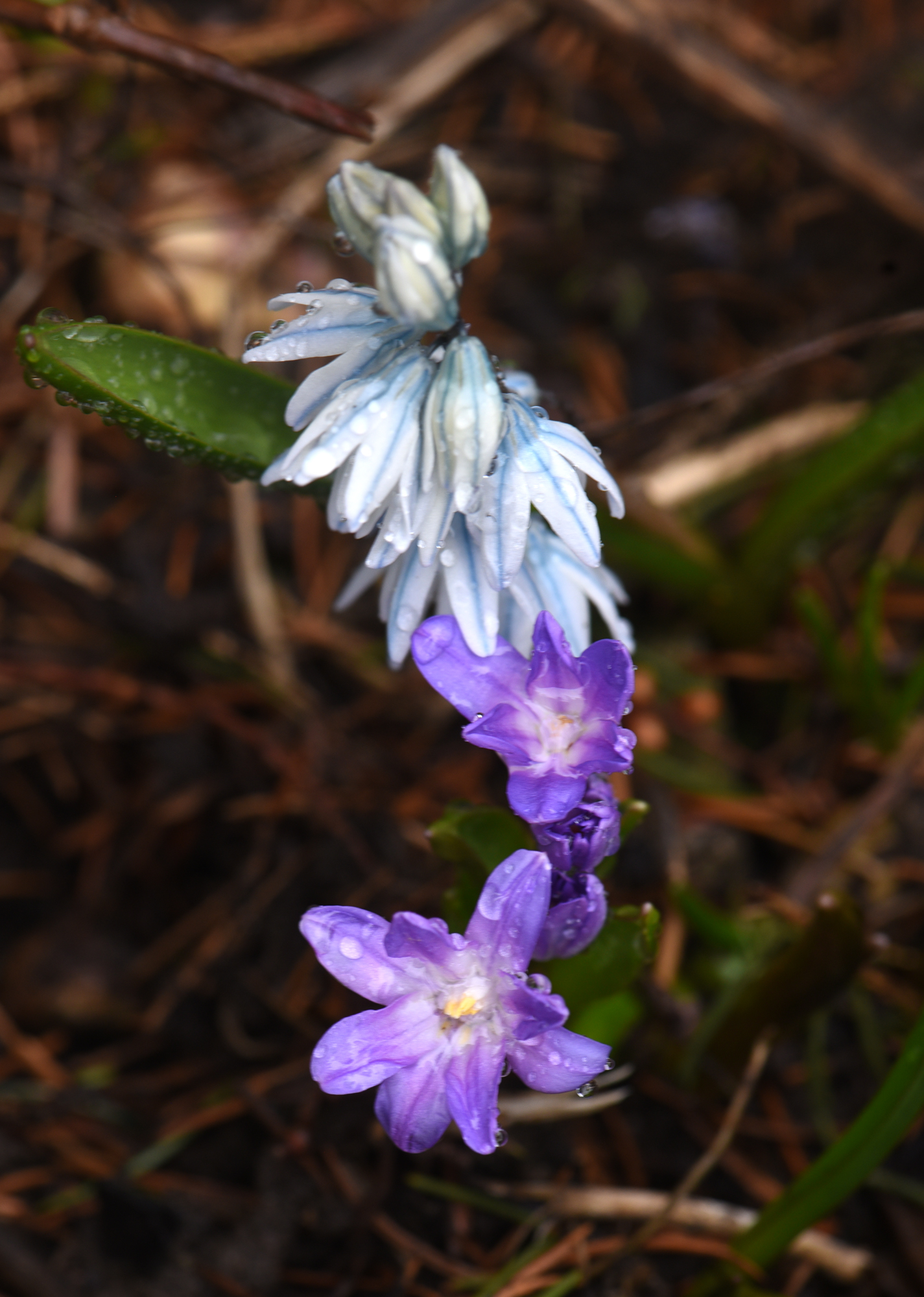 The blue flowers are puschkenia and the purple are 'Violet Beauty' glory of snow. These are some of the spring blooming bulbs that can be ordered right now. They make a great combination and are deer resistant. 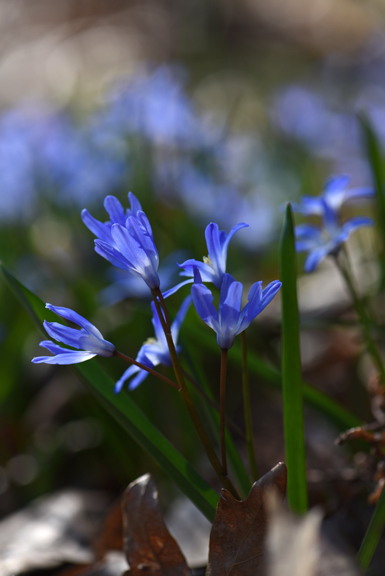 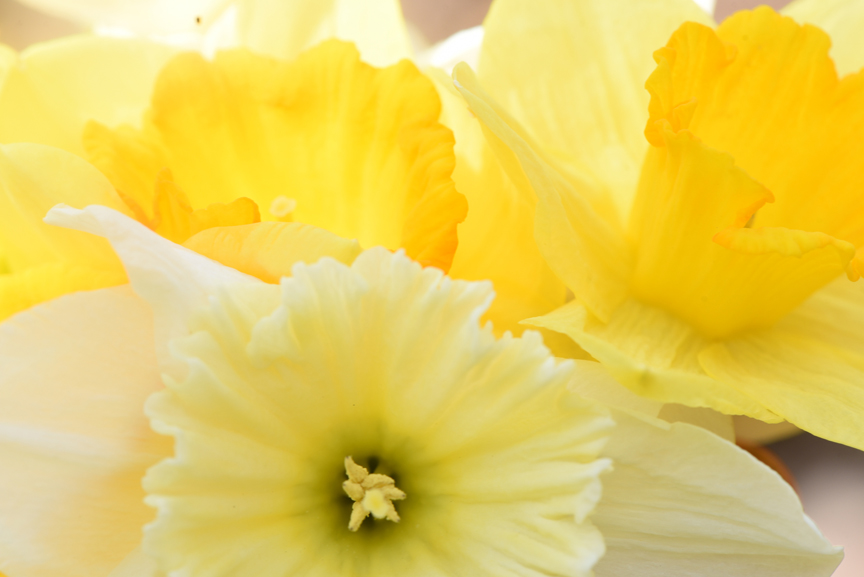 The beauty of daffodils is unmatched. Plant them in the fall and enjoy them in the spring. 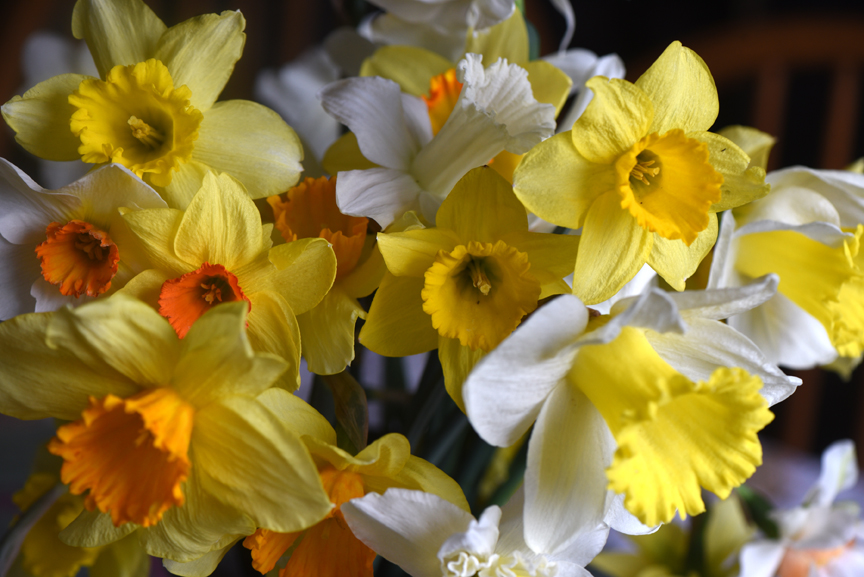 Daffodils come in many different shapes and sizes. 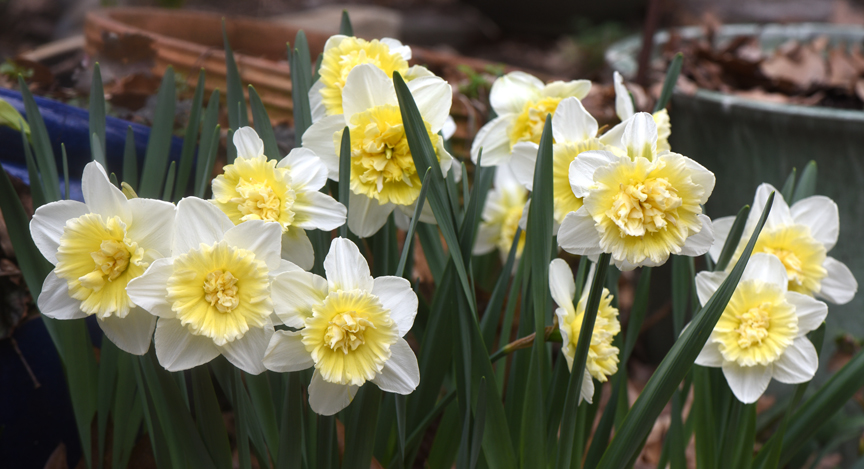 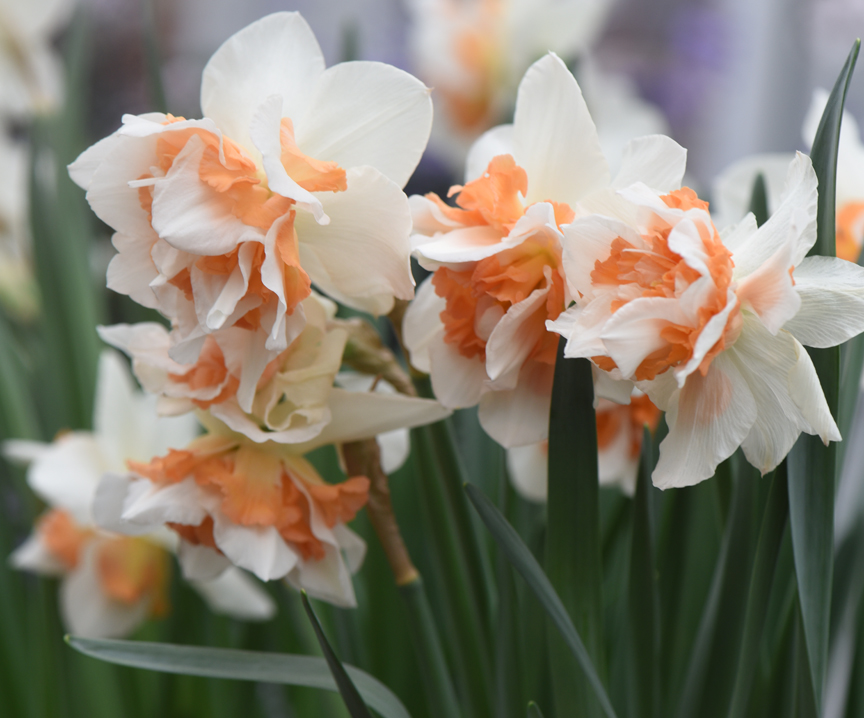 These beautiful daffodils are part of the Spring Flower Show at Phipps.

When snowdrops emerge, I run around the house yelling wildly, “it’s spring, it’s spring!” My wife just shakes her head and mumbles something about the snow and cold yet to come. My response is always the same, “something is blooming, there’s no stopping us now, the season has begun.”

Snowdrops are one of the first spring bulbs to sprout in winter. They love the cold weather, but not every bulb does. Photos by Doug Oster

I’ve seen the bulbs bloom as early as January 15th, this year it’s February 9th. When winter returns, the flowers will stay in a sort of suspended animation, happily shaking off the most bitter temperatures. When things warm up, they will continue to poke up and bloom followed by a litany of spring bloomers.

Every year these daffodils emerge too early. To their credit, they’ve bloomed every season for the past 21 years.

Snowdrops are supposed to bloom early, it’s some of the other bulbs which are concerning to gardeners. There are daffodils in my garden which someone planted between the house and the sidewalk. Not only is the foliage up, buds are there too. There’s good news and bad news when it comes to early sprouting bulbs and it’s the same. There’s nothing we can do about it. Nature has been dealing with this for centuries. Covering the fragile sprouts and buds will only damage them. My early daffodils always bloom, and are always laid prostrate with cold temperatures. They will resurrect themselves only a day or two later as the sun warms the sidewalk in the afternoon.

Some years early daffodils will sprout, push up buds and then be frozen, called bud blast. It happens once or twice in a decade. In those cases, we’ll have to wait another year to see those flowers bloom. It’s the reason gardeners plant early, mid and late season varieties.

These early blooming daffodils take a beating when the weather turns cold. They were planted by a gardener before Doug Oster moved to the property. When the weather warms up, they will actually stand up again.

When a bulb only sends up foliage, which we’re seeing now with tulips, don’t worry. The plant is just checking things out to see if it’s the right time to bloom. Most of the time they will wait until the days are longer and warmer to put on their spring show.

As bulbs start to come up, take some pictures or draw a map in your garden journal. Keep this up until after all the bulbs are done blooming and you’ll know what to plant where when the time is right.

The garden season has begun. If you don’t have snowdrops to tell you that, make sure you get them in the ground this fall.

Until then, I’ll be heralding the return of “spring” to anyone who will listen.

How to grow succulents indoors.

Video: Tour the Orchid and Tropical Bonsai Show at Phipps.

Time in the forest is precious for this gardener, what about you?