“A garden without a spirit is like a human being without a soul,” says Ryan Gainey in the opening lines of the documentary film “The Well-Placed Weed: The Bountiful Life of Ryan Gainey.”
Later he adds, “Every plant has a story just like every human being has a story, and the story needs to be told.”
Filmmakers Cooper Sanchez and Steve Bransford spent eight years with the self-taught plantsman and garden designer doing just that, painting a revealing portrait of this fascinating character. Gainey has been chronicled in countless written articles and in many national television productions that often focused on a fact-based, how-to-garden approach. The filmmakers were looking to dig deeper in telling Gainey’s story.
“No one’s ever made a real profile of him and try to show just how crazy he is and cranky and brilliant and unbelievable,” Bransford said with a chuckle via phone from Atlanta.
“Ryan didn’t totally understand what we were doing,” Bransford added. “He thought we were making another one of those gardening master classes.”

Ryan Gainey is a self taught plantsman and garden designer featured in the documentary The Well-Placed Weed: The Bountiful Gardens of Ryan Gainey. Gainey loved to dress up in unique clothes.

Early on, Gainey would begin his gardening discourse for the camera, “but we liked the moments right before he started his lecture or right after or when he got interrupted by his dogs,” Bransford says.
Stories about Gainey’s plant hunting are legendary, whether he’s harvesting along the side of the road or poaching from people’s homes or even public gardens. While Gainey explained how he removed some flowers with only his hands, Sanchez asks off camera incredulously, “You stole them from the library?”
Gainey had gardening superstar status around Atlanta for decades, and his work is just as highly regarded around the country and even the world. The film is a touching tribute to him that delves deep to discover the many layers of his personality. 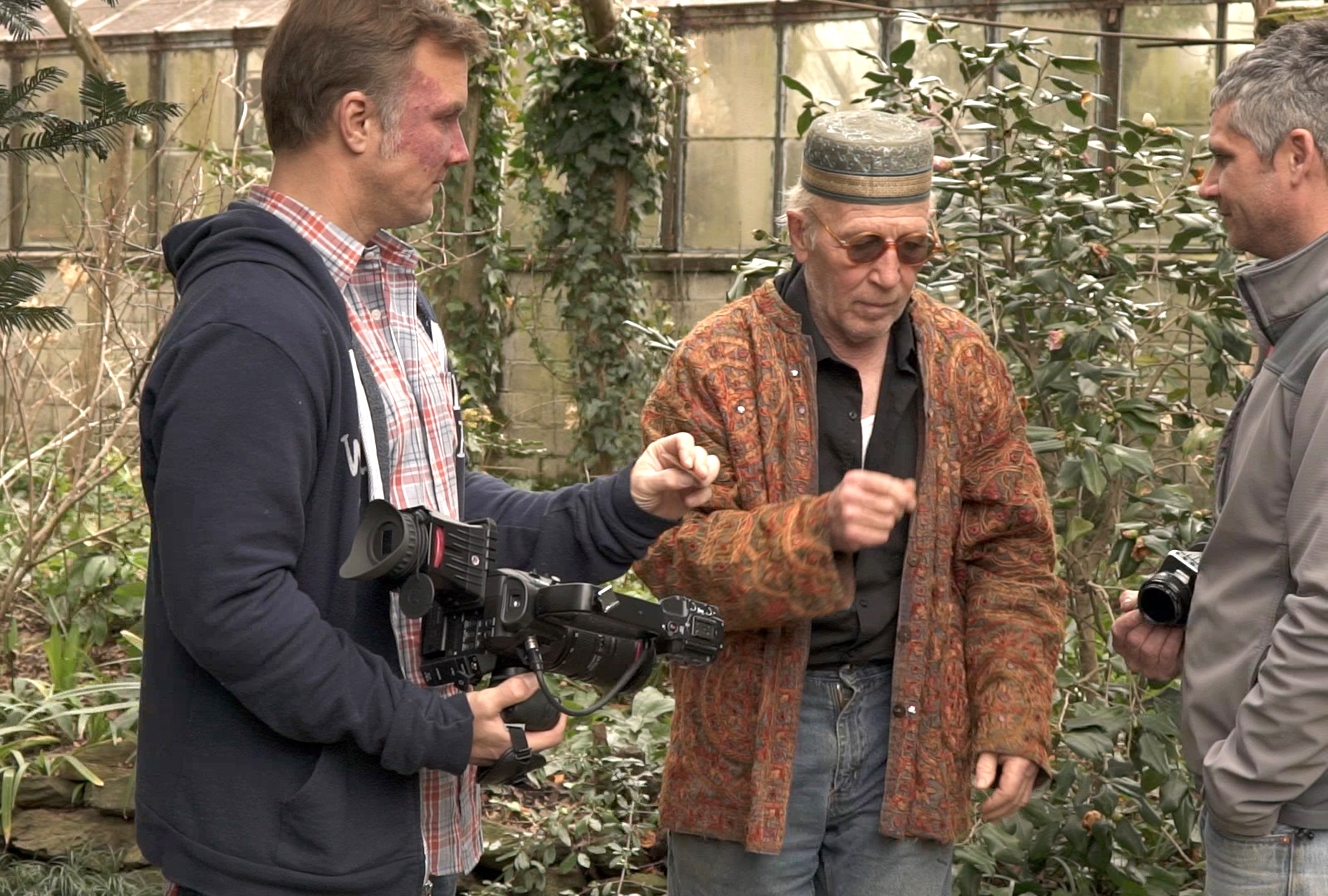 “Going into this thing,” Bransford says, “we didn’t want to make a gush fest. We wanted to have something more complex, and we also wanted to have something honest.” Brooks Garcia, who worked years for Gainey, was pretty honest when he said, “People ask if he was my mentor; he was my tormenter.”
When Mary Wayne Dixon is asked what she thought sustained their friendship all these years, after a short pause, she responds, “my patience,” with a coy smile. Another interviewee added, “He’s a brilliant man. He’s somewhere between brilliance and insanity; you just never knew what would come out of that man’s mouth.”
But Gainey’s friend Teri Bond and others discuss their love for the man.
“He lives simply and yet his life is as complex as any I think I’ve ever known,” she says. “I’m sorry there aren’t more people like him.”
Those sentiments are echoed throughout the documentary. Gainey was complicated, and this charming, inspirational film reveals the essence of who he was. He tells the filmmakers about his life growing up with nothing in South Carolina, exposing his deep sense of nostalgia. Gainey loved to dress up in what he called “his costumes” and was celebrated for his individual fashion sense. Glass-beaded hats, long flowing robes and lots of jewelry were part of his unique attire.
He cared deeply for his little dogs and in one heartwarming sequence he alternately scolds them and then softly speaks to the dogs in the garden. 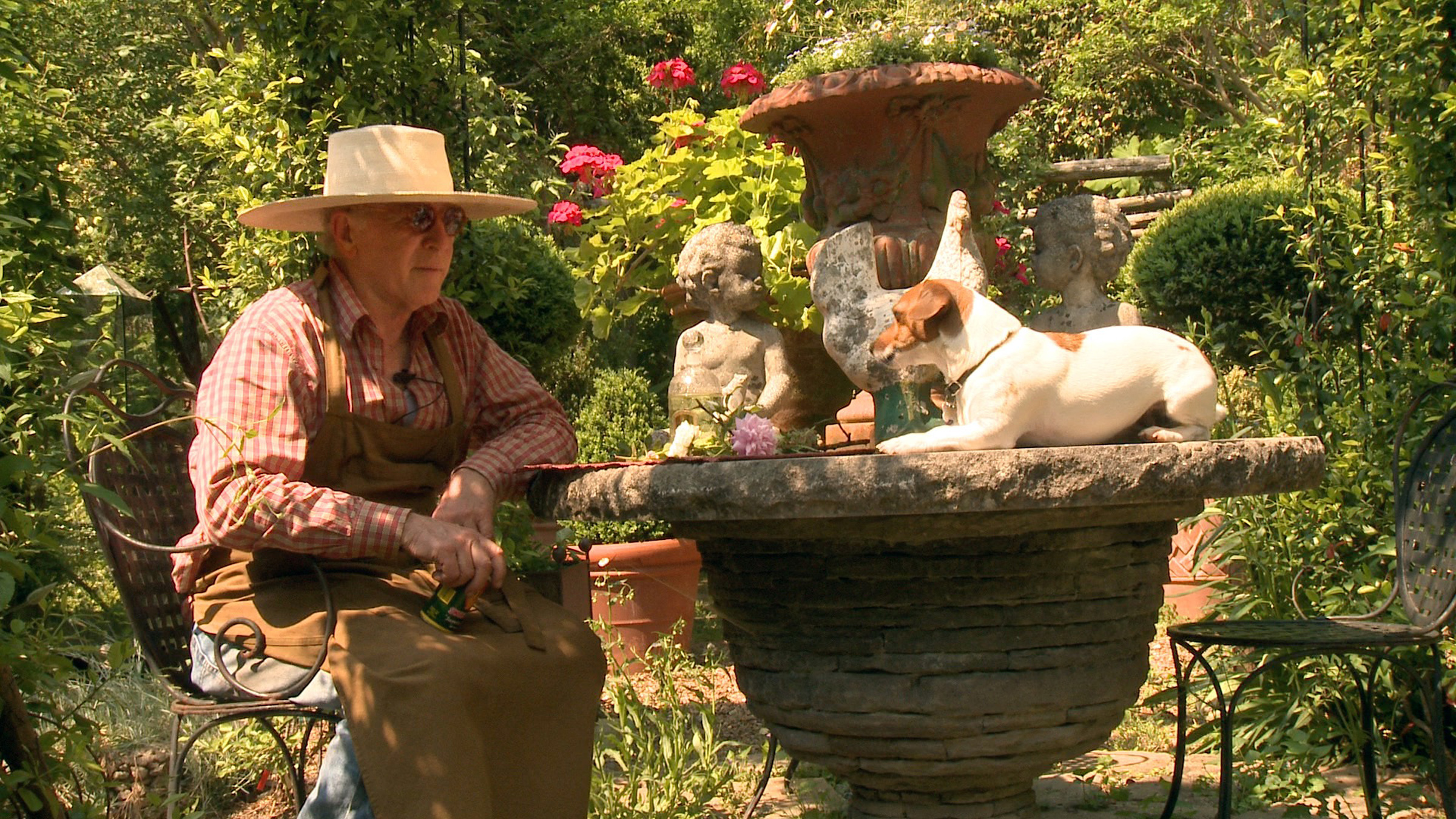 Ryan Gainey loved his dogs like they were his children.

When he discusses plants, it’s mostly in Latin and visitors were warned that he would be doing so if they spent time with him in the garden. If you asked him a question, you better have paper and pencil in hand to write down the answer, too.
He was loved by many and considered a genius by many more, as a garden for him was much more than a collection of intricately placed plants.
“That’s what people miss out on when they don’t imbibe all these romantic nuances,” he says in the film. “They lose the power of giving a garden a spirit, which makes it magical.”
Beautiful montages of his masterpiece home garden in Decatur, Ga., a suburb of Atlanta, are accompanied by tasteful musical lines. Pedal steel guitar scores much of the film, punctuated by eerie mandolin tunes played backwards, and other songs also drift through the film. The music sets a tone for the documentary, evoking perfect moods for each scene. 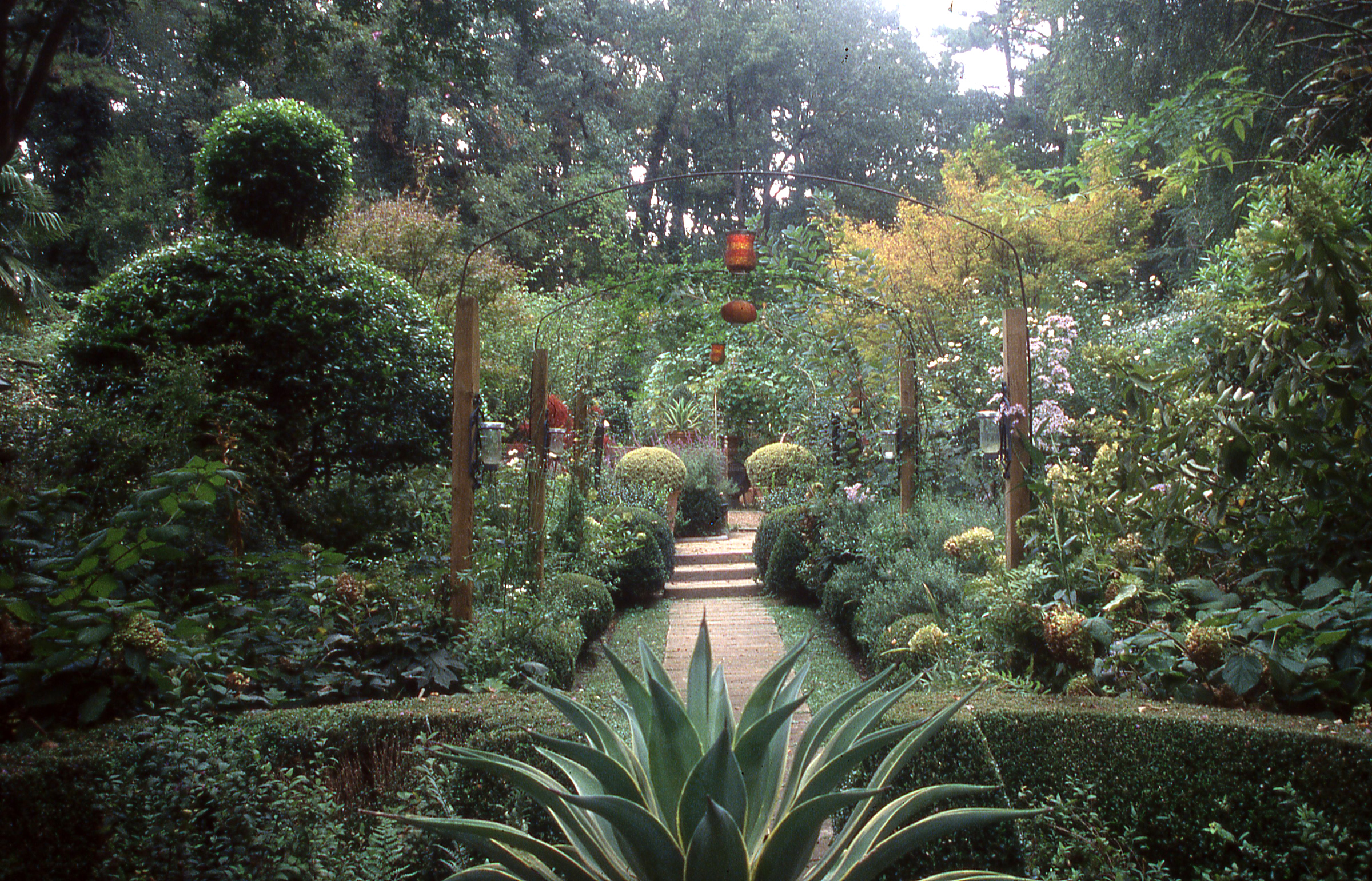 With eight years of footage, the two filmmakers spent countless hours crafting the film.
“It’s like beads on a necklace, these scenes of the film,” Bransford says. “The real art is finding the flow. You want to make it as engaging as possible. You want to balance out the humor and the sadness and the poignancy. It’s just like a garden; it takes time and it evolves.”
Gainey’s garden is filled with special plants connecting him with history and the people he’s loved and known.
“It was this landscape of living memory,” Bransford says. “It wasn’t just beauty; it was these deep personal and historical connections.”
Sanchez and Bransford were about to finish the final edit of the movie when disaster struck. A 140-year-old white oak crashed down on Gainey’s home. His neighbor ran over to alert Gainey it was time to get out. In a heartbreaking scene, he recounts the tragedy. “I’m not going anywhere without my dogs and jewelry,” he said choking back tears. “I think emotionally and spiritually I’ve been devastated.”
In July of 2016, Gainey died in a fire at his second home in Lexington, Ga. He ran into the burning house with a garden hose attempting to save his beloved dogs. There were no survivors.
The filmmakers honor him in a touching final scene, where he discusses the afterlife while one of Bransford’s stunning backlit shots of Gainey’s garden plays over the audio.
“A garden dies with the gardener,” Bransford says sadly, relating the old saying. “I think there’s some truth in that. Ryan was tinkering in that garden hours and hours every day. There was so much love put into that garden and that’s gone.”
Unfortunately, Gainey’s home in Decatur had to be demolished and is being rebuilt on a similar footprint. His gardens are being cared for by the same neighbor who alerted him to the fallen tree.
“He does still feel around,” Bransford says of his friend. “His spirit still seems like it permeates.”
Bransford and Gainey built a special relationship while working together on the film. Bransford coincidentally ending up living across the street from him during the final years of the project.
“On a personal level, I miss Ryan,” Bransford says. “He’s one of a kind, I wish he was still here. Losing him was really tough.”

The full, 78-minute version of “The Well-Placed Weed: The Bountiful Life of Ryan Gainey” is available on DVD from wellplacedweed.com for $15.
The documentary will be edited for time and aired this spring on PBS stations across the nation though Reel South.

Gainey’s garden is scheduled to be back on the Gardens for Connoisseurs Tour in Atlanta during Mother’s Day weekend. It’s a tour he founded.

The art of healing, how photography helped one woman through life.