Roses are a family heirloom for this gardener

Marsha Kennedy is warming up to her hydrangea after she’s finally coaxed it to bloom in hues of purple. It’s her favorite color, which is evident by her hummingbird print T-shirt and the purple tint in the 68-year-old’s hair.
Her Wilkins Township garden is filled with pollinator plants like milkweed, coneflower, phlox, monarda, borage and many more, but the most important plants aren’t in bloom right now. The roses handed down from her grandmother and uncle mean the most to her. 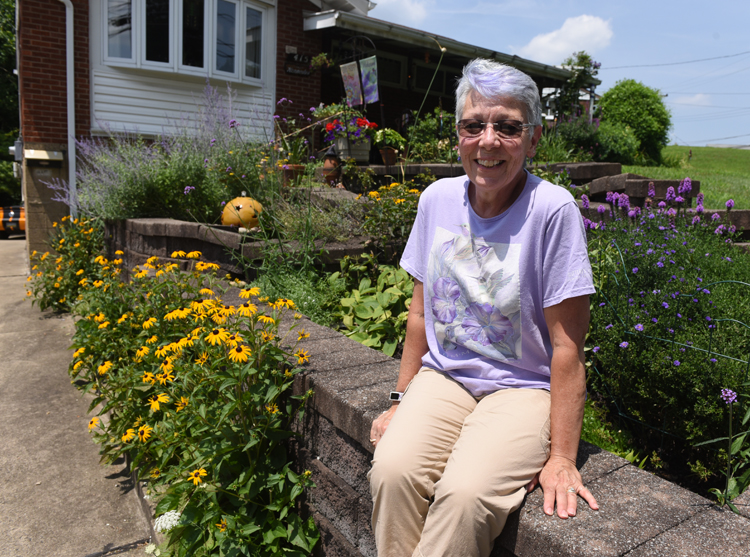 Marsha Kennedy of Wilkins Twp. grows a colorful garden for pollinators and cares for roses which are a family heirloom. Photos by Doug Oster 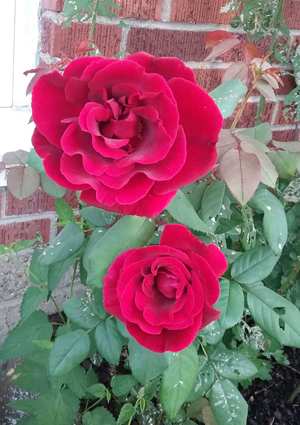 Sitting on her front porch with her husband Burt, she points to her grandmother’s rose.
“That is over 50 years old,” she says proudly. “It means everything to me. It is the best smelling rose and when it blooms, it’s grandma, she’s right there.” Kennedy learned to garden as a child from her grandmother and mother. Since both of her parents worked while growing up in Altoona, she spent countless hours at her grandmother’s house that was only four blocks away.
“She grew that rose in the corner of her yard for many years,” Kennedy says.
She has fond memories of time spent in that garden while growing up. One year her grandmother threw old potatoes into the plot and they took, providing a great harvest.
“I hate rhubarb,” Kennedy says with a smile, “but I ate it raw with grandma.”
She married Burt in 1978 and a year later got an unexpected gift. “Grandma said, ‘Come get this rose and plant it at your house.’”
It’s been blooming there ever since.
Kennedy inherited the love of gardening from her family and it shows in the immaculate, colorful landscape. Time in the garden is therapeutic for her and an important part of Kennedy’s life.
“It’s peace, it is where I get peace of mind, peace of heart,” she says.
It’s hard work, but rewarding, and time alone in the garden is precious.
“When I come out here and I know I’m going to work for a couple of hours, I tell my husband don’t call me in unless somebody’s dead,” she says with a laugh. “If it’s somebody I didn’t care about, don’t bother.” 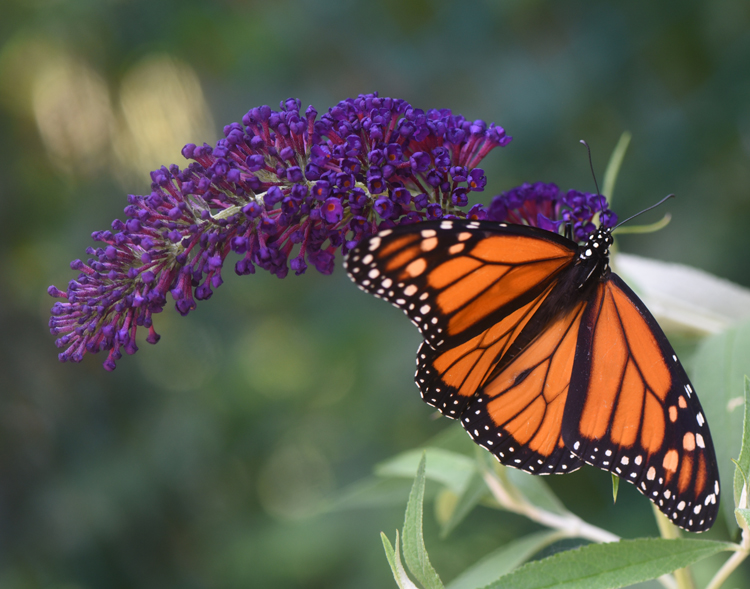 This monarch butterfly enjoys the flowers of a butterfly bush.

Yellow and green striped monarch caterpillars chew on their host milkweed plants, and adult orange and black butterflies flit across the purple flowers of a butterfly bush. Red bee balm (monarda) plants sway in the breeze and are filled with good bugs feeding on nectar in the blooms. Every season brings it challenges, and this year the deer have been a problem for her, eating things they normally don’t. The physical work gets harder and harder, too.
“Forty years ago, I was hauling stones,” Kennedy reminisces. “I can’t do that anymore.”
Over the years, she’s learned what works for the space by trial and error. One mistake was planting a trumpet vine too close to the house. While reading an article about a gardener who had their garage floor buckled by the invasive underground roots of the vine, she reacted instantly.
“I started yelling at Burt, we got to get it out of there,” she says, duplicating both the tone and volume of the original response.
Over the years she learned about propagating roses from her uncle Bob. He gave her plants like ‘Popcorn’ and ‘Brass Band,’ among others. He became an expert in roses while living in South Carolina, where he made new roses from old roses. After becoming ill, he moved back to Altoona, bringing his precious roses with him. On a visit he gave Kennedy five different plants and all of his reference books related to rose growing.
“I cried the whole way home to Pittsburgh with all his books in my lap thinking, ‘Does he know he’s going to go?’ It was three years later that he died,” Kennedy says sadly.
She treasures the important relationship between these plants and her past, as these roses are living family heirlooms.
“It’s a connection,” she says. “Burt has often talked about, ‘What if we move? What if we can’t do this anymore?’
“I said, ‘We better be able to take the roses. I’m not leaving that house without my grandmother’s rose.’ ”

Another garden with a special family connection.