As Mick Jagger performed a powerful version of “Angie” last week on stage in Canada, the beautiful, melodic piano lines weaving through the song were deftly being played by The Rolling Stones’ musical director and keyboard player Chuck Leavell. He’s been with the band 37 years and has also played with musical legends Eric Clapton, George Harrison, the Allman Brothers, John Mayer and countless others. 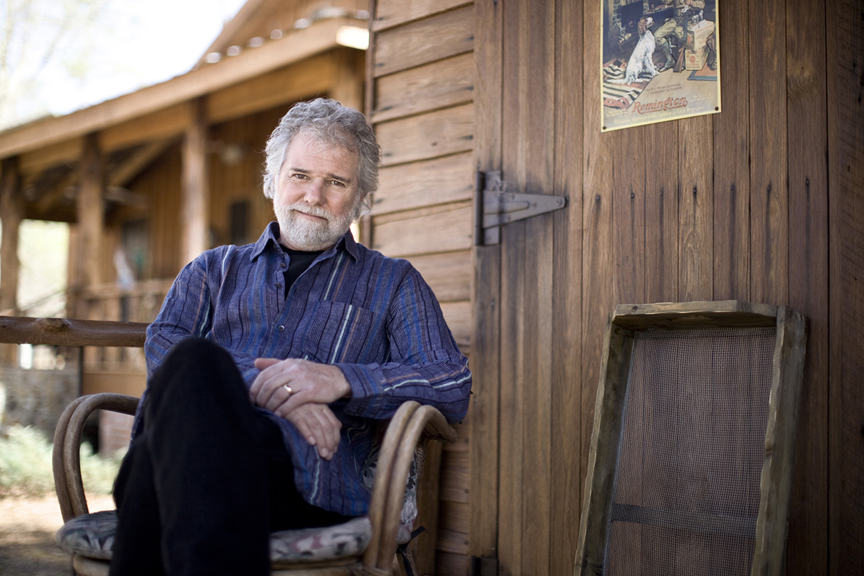 Chuck Leavell is musical director and keyboard player for The Rolling Stones. He’s also an environmentalist who runs Charlane Plantation in Georgia. Photo by Fernando DeCillis

Leavell’s passion for music is accompanied by a life spent as a steward of the environment.

“Being a child of the 60s with the environmental movement that was going on then, that would be the first time I became aware of what was going on,” he says on the phone from a hotel in Toronto. “Things were different then. A river actually caught fire and factories belched smoke into the air as they were unregulated.

“The birth of the EPA in the early 70s was a good thing and started clearing some of that up,” Leavell adds.

It was when he married his wife Rose Lane though, 46 years ago, that he became a hands-on environmentalist, converting her family’s farm, which she inherited from her grandmother in the 1980s, into mostly forest land. It’s a model of sustainable forestry, growing yellow pine and other species. He’s written two books on the subject, “Forever Green: The History and Hope of the American Forest” and “Growing A Better America.”

Charlane Plantation, in Georgia, continues to grow under his supervision, doubling in size over the past several years, now reaching nearly 4,000 acres.

His love for forestry and the environment is on display in the new TV show “American Forests With Chuck Leavell.” He’s completed three shows in the hopes of producing more for PBS. Leavell’s affable nature is revealed on the show as he tackles significant and important topics in a fun but informative way.

In Oregon, he presents an interesting story about skyscrapers being built with wood using something called cross-laminated timbers.

“The results are this amazingly strong construction of wood,” he says. “When you think of the advantage of building a skyscraper out of wood that is continuing to sequester carbon as it stands, rather than building out of concrete and steel in which you are actually causing emissions and undesirable pollution for that construction, this is a wave of the future to build in a sustainable manner,” Leavell says.

Besides being a more earth-friendly way to build, there’s something else that makes this style of construction appealing.

“The aesthetic joy and feeling you get of walking in a building made of wood, seeing the grain,” he says. “Walking, in a way, in a forest in a building.”

At Charlane he’s experimenting in many ways, like planting cyprus trees in newly acquired swamp land and bringing back the longleaf pine that’s been overharvested.

He’s a huge supporter of the American Chestnut Foundation, planting lots of hybrid chestnut trees in an attempt to resurrect a species wiped out by chestnut blight beginning in the early 1900s. One quarter of forests in the eastern United States were filled with chestnut trees before the disease devastated the trees. Often referred to as the tree that would take you from cradle to grave, the tall straight trees were perfect for building just about anything made of wood. They also reliably produced chestnuts for wildlife and people alike to enjoy.

The new disease-resistant hybrids cross American chestnuts with the Chinese version in hopes of bringing back the trees. He’s worked hard out in the field taking soil samples, checking for pests and getting young trees established.

“This has been a successful experiment,” Leavell says. “I can tell you that I’ve had chestnuts planted 10 years ago that are doing very well and are beginning to produce.”

His role as musical director of the Rolling Stones is another part of his life that brings him joy. 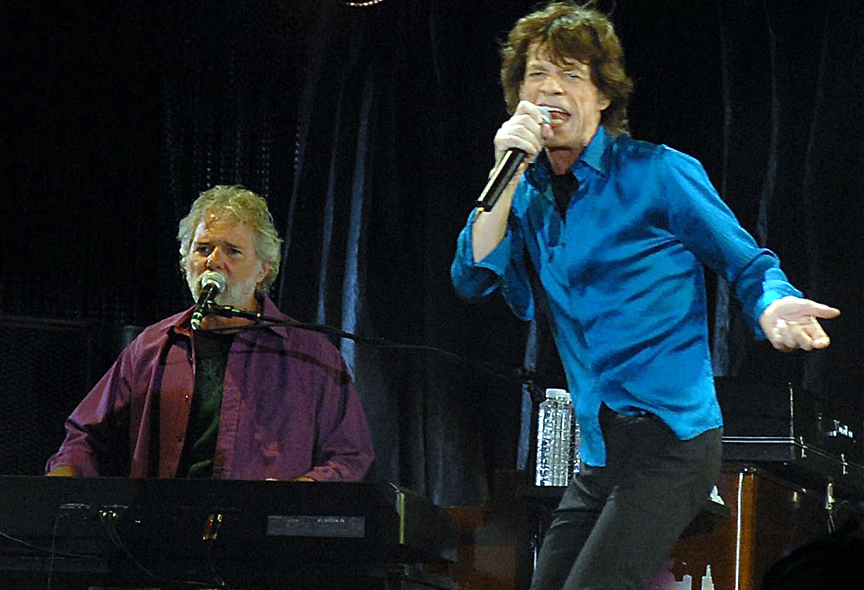 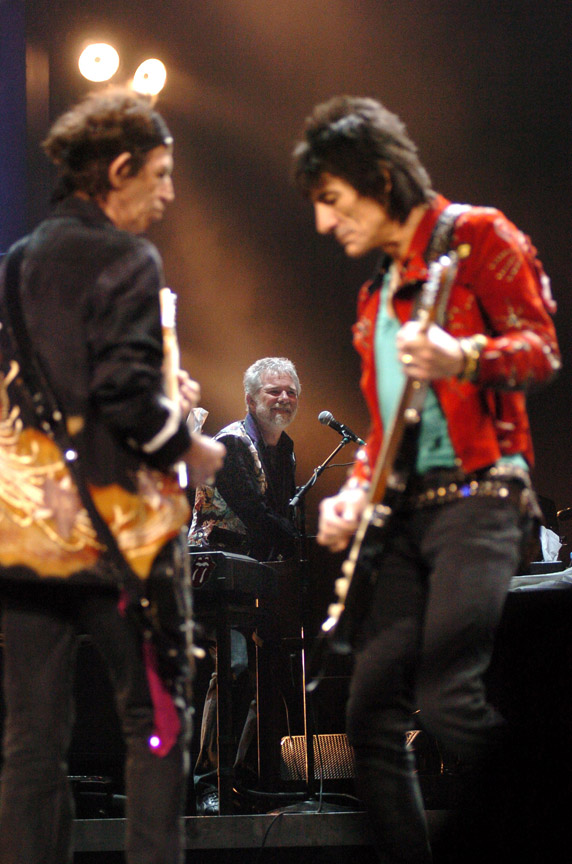 Chuck Leavell is musical director and keyboard player for The Rolling Stones. Here he is between guitarists Keith Richards and Ronnie Wood. He’s also an environmentalist who runs Charlane Plantation in Georgia. Photo by Kevin Mazur/Getty Images

“The guys look to me to remember all of the arrangement to quite a lot of songs,” he says with a little laugh. He has made copious records, noting many times during rehearsals of how songs have evolved from the way they were recorded to how they are played live. At the recent show north of Toronto, a close watch reveals Mick Jagger and other band members glancing over at Leavell for direction as they perform.

“I give visual cues to the guys and try to keep them as comfortable as possible so they can perform to the top of their ability,” Leavell says humbly.

During the show Leavell stands up, signaling a change in a song, raises his left hand like a conductor to end another tune. He takes a solo during “Honky Tonk Women” and his playing was showcased during piano-driven songs like “Let’s Spend The Night Together” and the deep cut “She’s A Rainbow,” along with his role singing background on many songs.

“It’s all about the groove,” he says about live performances. “It’s so much about playing together, listening to each other, supporting each other musically. If you can do that, then the whole is greater than the sum of its parts.”

Ronnie Wood joined the Stones in 1975, bassist Daryll Jones in 1994, and of course Mick Jagger, Keith Richards and drummer Charlie Watts go back to the beginning in 1964.

“We’ve spent a lot of time musically together,” he says.

“There’s a real brotherhood there,” Leavell adds about the band, “a real connection we all feel. All of us want this to be as good as it possibly can be.”

He’s continued to stretch as a musician outside of the band, too. His “Chuck Gets Big” album was recorded live with the Frankfurt Radio Big Band. It features tunes from the Stones, Allman Brothers, James Brown and Ray Charles as well as a few original cuts.

His current project is a fascinating collaboration with Mike Mills from R.E.M. and renowned world class violinist Robert (Bobby) McDuffie. The trio will tour this fall, with each show featuring classical music from the Baroque period performed as a sort of hybrid rock concerto.

“We’re going to give it a go,” he says. “I look forward to it. It’s always a challenge and a joy,” he adds of working with an orchestra.

Leavell is also one of the founders of the Mother Nature Network, a web site launched in 2009. It’s become an important resource reporting on the environment. It’s the most visited independent environmental web site, receiving five to six million hits a month.

“The goal all along has been to be the go-to place with the most accurate information, educational aspects for the environment, and I think we’ve done that,” Leavell says proudly.

He worries about the current state of affairs politically when it comes to the environment.

“I think all of us that feel similarly are anxious to see a change in administrations, and hopefully get things back on track,” he says. “Everything from pulling out of the Paris agreement to promoting coal. Really? It’s just so backwards. Government can play a big role and we will see in 2020 what happens.”

He wants people interested in ecology to use their time at the polls wisely.

“Be careful who you vote for,” he says, “and make sure people that are representing you are sensitive to environmental issues and are going to do the right thing.”