Noel Valdes might be best known as the inventor of the CobraHead weeder, but he’s a lifelong organic gardener who has been using raised bed gardening techniques for three decades. 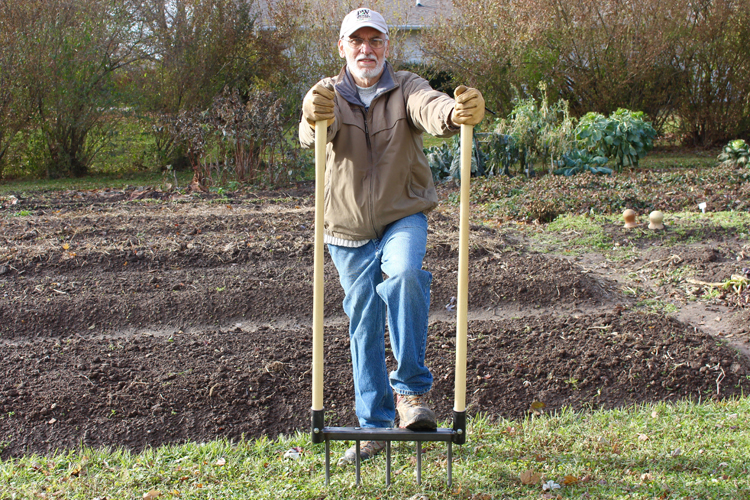 Noel Valdes, inventor of the CobraHead weeder, has used a tool called a broadfork to create his raised beds.

“I’ve gardened forever,” the 73-year-old said with a laugh. “We had to garden for food. I liked it since I was a little kid.”
In the late 1970s, he read John Jeavons’ “How to Grow More Vegetables” and was inspired to change from straight row gardening to raised bed gardens.

“It’s actually quite easy,” he says from his home in Wisconsin. “The only difference about raised bed gardening than traditional gardening in a row is that you grow your plants in a block or a grid so you get equal spacing when they mature.” 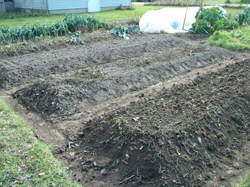 Noel Valdes, inventor of the CobraHead weeder, grows in raised beds that have been worked on for decades.

The beds are never stepped on and each year they get amended with organic matter like compost.

“After a while, if you work your beds right, your soil becomes way more productive that it can possibly become in a row garden,” he says. “The amount of production out of a raised bed is really significant.”

After 30 years of improving those beds with compost, his garden is extremely fertile.

“When I first started, it was as hard as a brick,” he says of the soil.

The first year he worked the garden, Valdes used a rototiller, which was also the last season he used one.

“This is stupid,” he said with a laugh, thinking back to using that machine in the garden. “I found a tool called a broadfork, and I used that to work up the beds. It has two long handles and thick metal tines, which loosen the soil without turning it over.
“My soil structure now is far superior to what it was when I first started,” he added proudly.

He grows in 18 rectangular beds that are about five feet wide and 20 feet long. They are separated by 16-inch wide paths. The soil is so nice that he can push a yardstick easily down to 24 inches.

“Plants like good growing conditions,” Valdes says. “They are always happier if you plant them in fertile soil, soft soil, by giving them enough water and sunshine. And they let you know it by producing more.”

It’s simple to convert a standard row garden to raised beds, he adds. Al you have to do is lay out a grid pattern to determine where the paths will be and be sure you can reach to the inside of the garden beds. Anything that’s not a path is a bed.

He’s a compost fanatic and is able to make enough from things out of his garden and house to keep the garden thriving. The only thing he avoids coming out of the kitchen is material with meat or oils. Anything from the garden, including weeds goes in the compost pile along with leaves, too.

“I know people think I’m crazy,” he says with a chuckle, “but there are three weeds I grow on purpose.”

Jerusalem artichokes, Russian comfrey and galinsoga are all grown as raw material to make more compost. He warns though, that all three can get out of hand unless kept in bounds by occasional harvests.

“Compost cures all ills, he says. “If you have bad soil, hard soil, too much clay, compost can fix it.”

The intensive planting technique he uses allows for plants to be spaced so that when they mature, the leaves are just touching each other. This acts as a living mulch, which cuts down on weeding and watering. In mid summer, many of his beds are a carpet of green.

“There’s no reason at all to put any harmful chemicals into your garden,” he says. “It’s insanity in my opinion. Gardening can feed you and it’s fun.”

As owner of CobraHead LLC, he travels constantly and work requires much of his time. There’s an irony that his business revolves around gardening, but he’s hard-pressed to spend as much time as he would like in the garden.

The invention of the CobraHead weeder was purely accidental. He was using an antique tool that’s no longer manufactured, which has three to five spoon-shaped curved cultivating tines. As he scraped soil on the edge of a bed, one of the teeth came out. 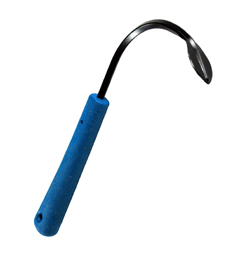 Noel Valdes  invented of the CobraHead weeder by accident.

“I just got down on my hands and knees and started pulling weeds with it and realized that it pulled much better than any other weeding tool in my collection,” he says.

He went to the local junk store, bought another one of the cultivators, took out a tine, put it into a wooden handle and used it in his own garden for another four years.

“I got to buy one of these,” he thought to himself, “but it wasn’t out there.”

There were versions with a long handle but not with the short handle he loved. After a visit with a lawyer and business school, he started the process of making the tool locally. When asked why the CobraHead became such a hit with gardeners, Valdes replies, “because it works, it’s just a great weeding tool.”

Now the company produces the CobraHead weeder, CobraHead Mini Weeder and three different-sized long-handled versions. He also just released his own version of a broadfork.

He’ll plant about 60 tomato plants, tomatillos, potatoes, garlic, shallots, leeks, and lots of other things. He’s also enjoying unusual varieties of sweet peas. One is called ‘Capucijner,’ which is a purple-podded variety.

“It makes the best soup pea that you can imagine, it almost tastes meaty,” he says.

He saves seeds from many of the plants he grows and jokes about not remembering the proper names after so many years of planting the same cultivar.

“We just call that our big red tomato,” he says laughing.

He stopped caging tomatoes and now opts for a rugged trellis system using seven-foot tall bamboo stakes.
Valdes’ life in the garden has been a happy one and he gets satisfaction out of the precious time he spends gardening.

“I get the pleasure of being about as close to nature as possible and seeing how the whole cycle of life goes on, but most importantly we get a lot of food. The food you grow out of your own home garden is way better than anything you can get in the store. The food you grow is the best.”