Planting shrubs is a fall tradition, try something deer resistant

Randy Soergel is carefully arranging shrubs just like he would if he was presenting them to a customer. Different colors and textures are combined to demonstrate how they could used in the landscape. The owner of Soergel Greenhouses in Wexford has one major concern though when it comes to recommending shrubs. 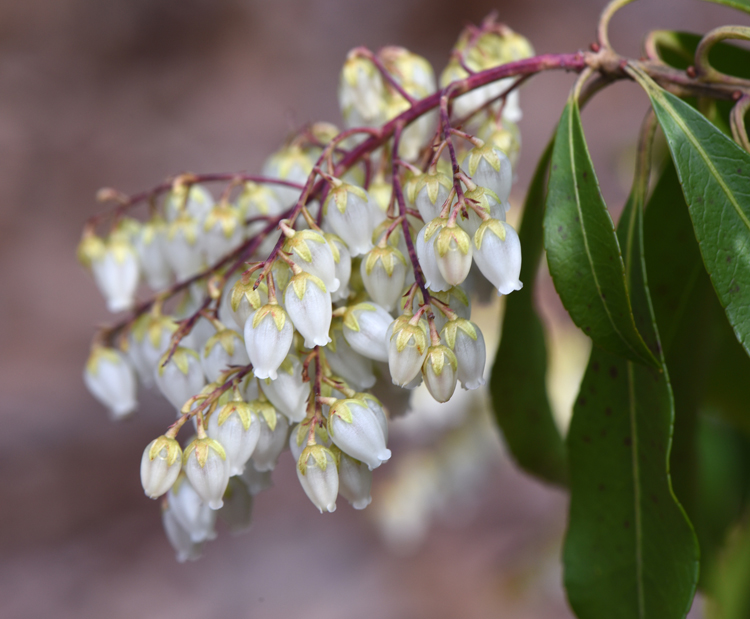 Pieris japonica is one of the deer resistant shrubs recommended by Randy Soergel, owner of Soergel Greenhouses in Wexford. 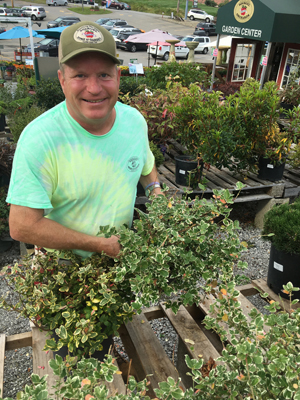 Randy Soergel, owner of Soergel Greenhouses in Wexford has lots of deer resistant shrubs to talk about.

“It all comes down to deer resistance,” he says. “It’s the number one challenge that anyone has … anywhere, even the city.”
He says spirea, ‘Golden Mop’ cypress, pieris japonica, mountain laurel, PJM rhododendron, blue star juniper, barberry and more are all deer resistant. But each community is different. The four-legged pests will eat just about anything if hungry enough, which makes the selection process all that more difficult.
“I tell people to drive around the neighborhood and see what people have,” Soergel says. “The fun challenge is to use those plants creatively in the landscape.
When gardeners come to the nursery, he begins by finding out where they want to plant and why.
“Just because you took something out of a landscape doesn’t mean that you need to put something right back in that spot,” he says.
Traditional plantings often include a shrub on either side of the front door. When one dies, homeowners often want to replace it with the same plant in the same place.
“I try to make them think of it as a room,” he says of their landscape. “Let’s look at what you’re really trying to do … All this is an investment as to what makes that next buyer want to buy the house.”
Although customers need to know how big the plants will eventually get, he warns that it’s not an exact science. Use plant tags as a guideline, but gardeners need to “understand that plant material will continue to grow,” he says. “The labels should really say how much it grows per year.”
Another critical factor for planting is good drainage. To test the planting area, he says, fill the hole with water and make sure the water drains away in an hour or so. If that doesn’t happen, it’s time to create a raised bed for the plants.
A newly planted shrub needs to be watered until the ground freezes. The number one reason they fail because of lack of moisture. “If it dries out just once, it dies,” he says.
In school, Soergel always loved figuring out those math problems with trains going opposite directions. He sees diagnosing plant issues the same way and works hard to make sure gardeners know what they’re doing when they plant a shrub.
“If a plant isn’t successful, there’s always a reason for it, and it’s not the plant,” he says with a smile. 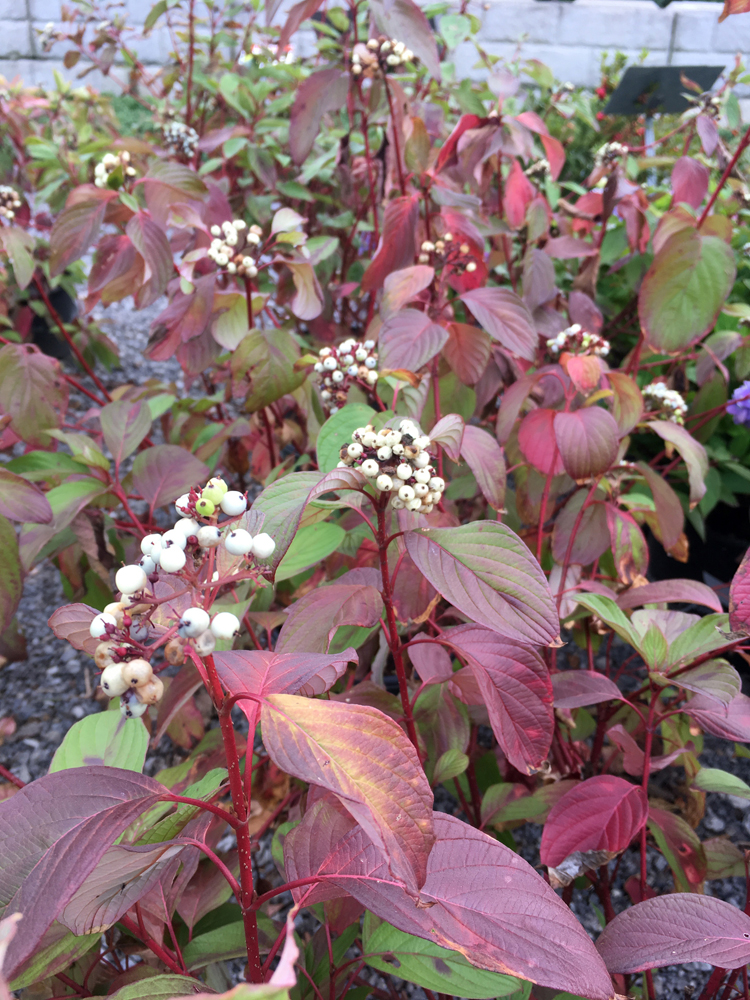 Red twig dogwood ‘Baileyi’ is one of the deer resistant shrubs recommended by Randy Soergel, owner of Soergel Greenhouses in Wexford.

Shannon Downey, marketing specialist for Proven Winners Color Choice Shrubs, explains why fall is a great time to get bushes in the ground.
“The cool temperatures, reliable rainfall and the shorter days make it ideal for plants to acclimate to their new home and enough time to put on roots before the ground freezing,” she says. “They put all their energy into rooting rather than flowering.”
To avoid the “bathtub effect,” use the native soil which is dug from the planting hole as backfill when planting. If the planting hole is filled with compost, the plant’s roots might not reach out past the soil amendment.
Proven Winners’ plants are sold in everything from quart-sized containers up to 5- and 7-gallon pots. Smaller sizes save money, but require patience as they mature. Besides consistent watering, the new plants should be mulched to keep the soil evenly moist. “Think of it as a blanket,” she says of the mulch.
It’s important to put the right plant in the right place too, she says.
“You’ll see the best performance from a plant when it has the right sun exposure and the right amount of water,” Downey says. “If you plant a large shrub in a small space, you’re going to be creating a lot more work for yourself trying to keep it in check.”
Roses and other plants need plenty of air circulation to prevent fungal diseases. “Really do your research on your plants to make sure you’re selecting something that’s going to thrive in your spot,” Downey says.
Shrub trends
“I think you’re going to see a greater mix of edibles and ornamentals mixed in the same spaces,” she says.
“You could plant an edible hedge or just have a really low maintenance fruiting plant in your landscape,” she says.
Elderberries and goji berries are a couple, but one of the most fascinating is haskaps. Lonicera caerulea are easy to grow shrubby plants that put on what look like elongated blueberries that taste like a blueberry and raspberry combination; they are often referred to as yezberries. The plant is more common in Canada due to its cold hardiness as is nearly indestructible.
“It’s just kind of hitting the market in the States,” she says. 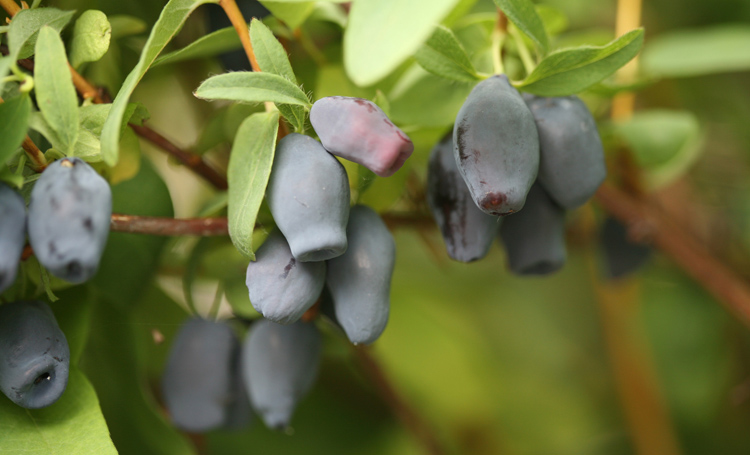 Yezberries or haskaps (Lonicera caerulea) are an easy to grow edible that grows like a shrub from Proven Winners Color Choice Shrubs. 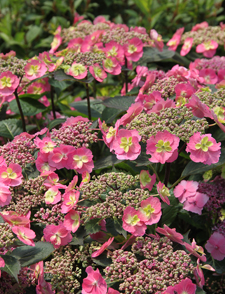 ‘Tuff Stuff’ is a mountain hydrangea that is long blooming from Proven Winners Color Choice Shrubs.

Reblooming plants are a big deal for extending the season. There are lilacs and other plants available, including a series of mountain hydrangeas (H. serrata) called ‘Tuff Stuff.’ It’s a hydrangea that starts blooming in early summer and continues into late summer and fall.
There are also plants that are very long flowering. “Continuous bloomers like all of the roses in the ‘Oso Easy’ series, once they start they don’t stop until frost,” she says. The ‘Pugster’ series butterfly bush are small and bloom all summer.
Plants that grow with tall narrow habits are becoming popular too. Rose of Sharon is one that people either love or hate. ‘Purple Pillar’ is only 2 to 3 feet wide but will get 10 to 16 feet tall. It flowers with double purple flowers. Many newer varieties are seedless and not as invasive as your grandmother’s shrub.
As for deer resistant shrubs, she laughs. “There’s no such thing, every time I say something is deer resistant someone tells me a deer just came and ate it.”

Proven Winners Color Choice Shrubs has great information for hydrangea growers. The number one garden question is “why won’t my hydrangea bloom?” Hydrangeas Demystified will tell you everything you need to know. provenwinners.com/Hydrangeas-Demystified