Most people became aware of Pitt Moss when company founder Mont Handley appeared on ABC’s “Shark Tank” in 2014. But Handley worked for more than 20 years on the product that recycles paper material, mostly newspapers, turning it into a planting medium for gardeners.

The front end of the transformation is not that unique, CEO Brian Scott says, but “the magic is in our mix. The cellulose has to be really clean and pure.” 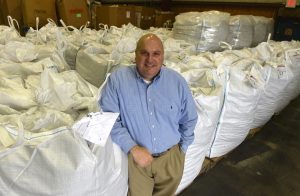 Brian Scott, CEO of Pitt Moss in Ambridge, poses in the company’s warehouse with bags of material used to make the product.

The Ambridge company combines that fibrous cellulose with other all-natural ingredients.

“It is a totally different new growing media; our product works better,” Scott says. “It’s got certain properties that can’t be replicated with peat moss.”

Pitt Moss Performance is used for seed starting and as a potting soil, as it includes fertilizer. Pitt Moss Prime does not have added fertilizer and is a soil amendment that’s often mixed with compost or used in garden beds. The Organic Materials Review Institute recently certified the product as organic, something that Scott is thrilled about.

“For us it’s a really big deal, we’ve always known the paper is organic,” he says. “Having the certification is a great claim for us to have.”

Pitt Moss also won the prestigious Tibbetts Award. The award recognizes individuals and organizations that have made an impressive impact in technology.

Danielle Chapon, one of the owners and managers of Chapon’s Greenhouse in Baldwin, started using Pitt Moss in January for all the nursery’s annuals and vegetables. They tested a few bags before making the change and left impressed. Thousands of plants are now growing in the medium.

“The plants just responded very well,” she says. “Seed and plugs, you can use it for either.

“We really like how it’s light and fluffy and drains well,” she says, and it’s actually cheaper than what they used before. She says it is also great for seed starting and for potting up plants.

In the past, Pitt Moss has only provided its product to commercial growers. But this season Pitt Moss is available locally at garden centers, through Amazon and the company’s website. It’s super absorbent and doesn’t need to be watered as often as other mediums, because it drains well, Scott says. Pitt Moss is sustainable, and the paper used to make the product is sourced locally.

“We want gardeners to be able to grow better, stronger plants,” Scott says. “Frankly, we want them to be able to do it with less water, less fertilizer and, in addition to that, know that they are using local recycled material.”