For nearly 125 years, Phipps Conservatory and Botanical Gardens has been a destination for plant lovers and those captivated by the beauty of nature. Visitors have recently been treated to a year-long celebration leading up to the December anniversary. Throughout the decades the site underwent many changes.

Since the early 2000s, Phipps Conservatory has become one of the leading examples of sustainability. President and CEO Richard Piacentini and his team at the conservatory have led a green revolution, which began with the design and construction of the welcome center that opened in 2005. 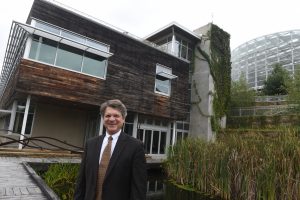 Richard Piacentini is president and CEO of Phipps Conservatory and Botanical Gardens. He’s standing in front of the Center for Sustainable Landscapes, one of the greenest buildings in the world. To the right is the Tropical Forest.

In the early planning stages, they were introduced to LEED (Leadership in Energy and Environmental Design) building certification.

“That’s when we learned that buildings account for 40 percent of the energy we use, the pollution we produce, the water use, it is all related to the built environment,” he says.

The more that was discovered about LEED and what it meant, the more the project transformed. It became not only a beautiful, tasteful addition to the Victorian conservatory, but also a place that’s extremely energy efficient and environmentally friendly. By using locally sourced materials, locating the structure mostly underground and thinking hard about water usage, Phipps became the first Silver LEED-certified visitor’s center awarded to a public garden.

Back then, going for silver certification was considered a huge stretch, but it was just the beginning of a journey that would culminate with onsite buildings that actually use no net energy or water (More on that later).

The welcome center uses low-flow toilets and waterless urinals, which has saved an estimated 1.6 million gallons of water since the building was opened.

The Welcome Center at Phipps Conservatory and Botanical Gardens is one of the green buildings on the campus.

“It set off a whole revolution of thinking,” Piacentini says of the first of three phases to expand the conservatory.

There are many facets to being sustainable, reaching every corner of the conservatory. The cafe got rid of all plastic disposables, all the pre- and post-consumer waste is composted, and you won’t find a plastic bottle of water in the conservatory either. The restaurant focuses on meals made with local, organic foods that are freshly made.

“Twice now Food and Wine has ranked it as one of the top museum restaurants in the nation,” Piacentini says proudly.

The initial move toward sustainability also extends to the front lawn, where all irrigation was removed, tough endophyte-enhanced grass varieties were planted, and organic lawn care practices were put into place. Those measures have saved thousands more gallons of water, and the lawn looks great all season long.

Phase two of the sustainability started with new production greenhouses.

“We were led to believe that you cannot get a greenhouse LEED certified because there’s so much glass you’ll never pass the energy requirements,” Piacentini says.

The decision was made to make these new greenhouses as efficient as possible. Radiant floor heat is the most efficient way to warm the space, and energy blankets are used to retain heat at night.

“The whole roof opens up,” he adds. “It cannot get hotter inside than outside and uses no energy.”

Those greenhouses were the first to ever be certified LEED platinum, the highest level.

Next up in phase two was the Tropical Forest, which also includes the Special Events Hall.

Two visitors to Phipps Conservatory and Botanical Gardens spend time in the Tropical Forest, it’s one of the green buildings on the Phipps campus.

The 11,000-square foot space is home to exhibits that rotate every few years, featuring different tropical regions (currently the flora and fauna of Cuba).

The northwest and northeast walls use thermal massing to help hold heat in, while energy blankets and double-paned glass on the roof help insulate the space. In conventional conservatories like this one, only 20 percent of the roof usually opens. But in the Tropical Forest, half of the roof can open for cooling.

Earth tubes are an innovative tool that keep the forest cool despite a huge bank of south-facing glass. Six concrete pipes that are 24 inches round and 300 feet long are buried 15 feet underground. When the hot air is rushing out through the roof, it has to draw replacement air from below. The air is pulled through these tubes and the ground helps cool the air.

“That space is remarkable,” Piacentini says, “because it’s always around five degrees cooler inside than outside and it uses no energy to do that. It has exceeded our expectations.”

There’s also a fogging system inside which helps with evaporative cooling.

The next step, phase three, took a huge leap in sustainability. And it’s a fascinating story about how the Center for Sustainable Landscapes (CSL) came to be. 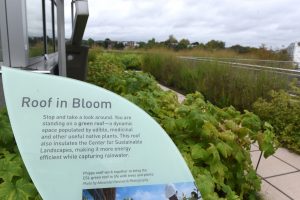 The Center for Sustainable Landscapes at Phipps Conservatory and Botanical Gardens is one of the greenest buildings in the world. One of the innovative features of the building is a green roof.

“We just kept pushing the bar a little bit further and we made it,” Piacentini says of each phase. “That got everyone excited to see how we were progressing.”

Through the process, the price of concrete and steel was skyrocketing, which also affected the bottom line. He pitched to the board of directors to build phases one and two “right,” meaning with sustainability as the focus.

They agreed wholeheartedly with one caveat. Piacentini laughs as he relays the conversation: “‘You have to promise, Richard, that you are going to wait on phase three because we’re tired of raising money.’”

He agreed, but after attending a green building conference in Denver, showing the plans around and relating ideas about what would become the CSL, Piacentini learned of the Living Building Challenge. The challenge was a new standard that went beyond LEED Platinum, requiring that buildings are net-zero energy; that all water is captured and treated on site; and that many commonly used but toxic materials are not used in construction.

Discovering this new concept, he realized this building that Phipps was planning fit perfectly with the challenge.

“I came back and I started to tell my board chair about the Living Building Challenge,” he recalls. “She said, ‘Richard, you promised.’”

He relented, but while giving tours of the recently opened Tropical Forest in December of 2006 to various philanthropic foundations, Piacentini mentioned his dream for the next phase. He was stunned by the reaction.

“Every single one of them said, ‘You can’t wait; you need to do this now,’” he says with a smile.

In January the entire board voted to accept the Living Building Challenge and to start the next phase of fundraising for this building. The financial crisis of 2008 set the project back nearly two years, but when all was said and done, in 2013 Phipps opened this benchmark of sustainability.

“It’s still considered to be one of, if not the greenest buildings in the world,” Piacentini says. “It’s still the only building in the world to have met the Living Building Challenge, LEED Platinum, WELL Platinum, and Four Star Sustainable Sites.” 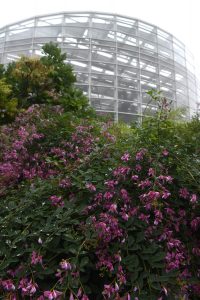 Energy from the sun and wind create more energy than the building uses, and the water systems are revolutionary.

“We’ve been in here six years and not a single drop of rainwater has left the site,” he says.

The storm water is either captured or infiltrated on the site. A green roof, asphalt replaced by native vegetation, five rain gardens, and permeable parking are all part of the system.

Any water that overflows that system goes to a storm water lagoon. If the lagoon overflows, water is directed into an 80,000-gallon underground storage. That water can be used for irrigation or transferred to an open area where it will infiltrate into the soil.

Water from toilets is treated through wet lands, sand and UV filtration and recycled back to flush through again.

“When you think about it,” he says, “how crazy is it to take drinking water to flush toilets? We save millions of gallons of water by (not) doing that.”

This is all off-the-shelf technology, he adds. “Anyone can do this.”

And he hopes they do too, as the green building initiatives here are an example of what’s possible. Piacentini has talked to countless visitors about sustainable building.

“A lot of them think it’s going to cost a fortune. Yeah, it’s a little more expensive, but when you think about it, we’re sitting in a building that’s never going to have an electric bill, heating bill, cooling bill, never have a sewer bill. That’s pretty powerful.”

What the future holds

Phipps is not staying put with the CSL either. Two more buildings on the campus are earmarked to meet the Living Building Challenge. Phipps Garden Center in Schenley Park is in the planning stages for renovations to meet the same standards.

Even the old conservatory, built in 1893, is being transformed, hoping for a 50 percent reduction in heating energy use.

Piacentini, his team and board have built an internationally recognized, environmental friendly building that has become the benchmark of what’s possible for the future.

“Why not take a place that inherently is beautiful,” he says, “a botanical garden and use that as a way to show people that we can do things better, and where we’re going is better than where you are right now. That’s the ultimate goal.”

• Japanese Courtyard Garden At Phipps Gets Refreshed By Original Designer