New Gardener: Tomatoes are growing (finally) and other updates 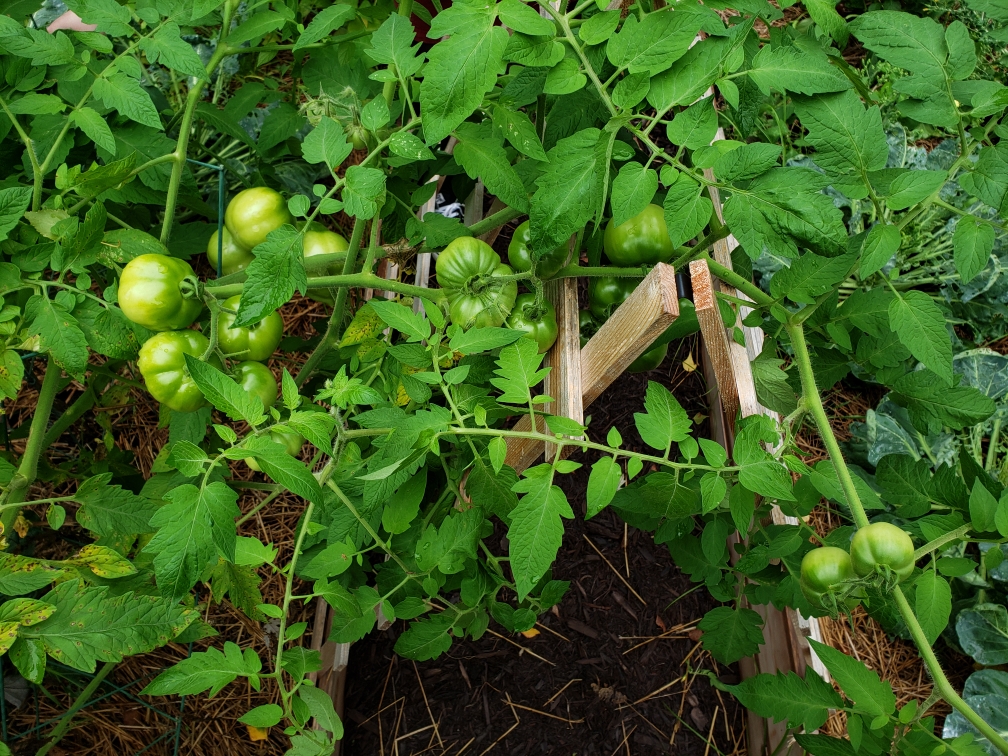 The garden is a lot more green since the last time I checked in. Four of the five tomato plants are loaded, albeit with green rather than red fruit. I did take a suggestion from Doug’s In The Garden video to trim the tops of the plants to spur panic mode.

The intense rain from two weekends ago played havoc with the plants, sending them leaning, as you can see in the above photo. I also learned that my small tomato cages aren’t heavy duty enough to handle these plants when they get bigger. The saving grace is that the trellis meant for cucumbers (which never actually took off this year) is able to support the weight of all these tomatoes.

Doug says: Lesson learned on those cages, that’s how we all figure that out. I use concrete reinforcing wire to make my own cages. Just cut it into five foot lengths and make the cage. They last for decades, are five feet tall and will support the huge vines. I put a tomato stake or two and attach the cage to them. 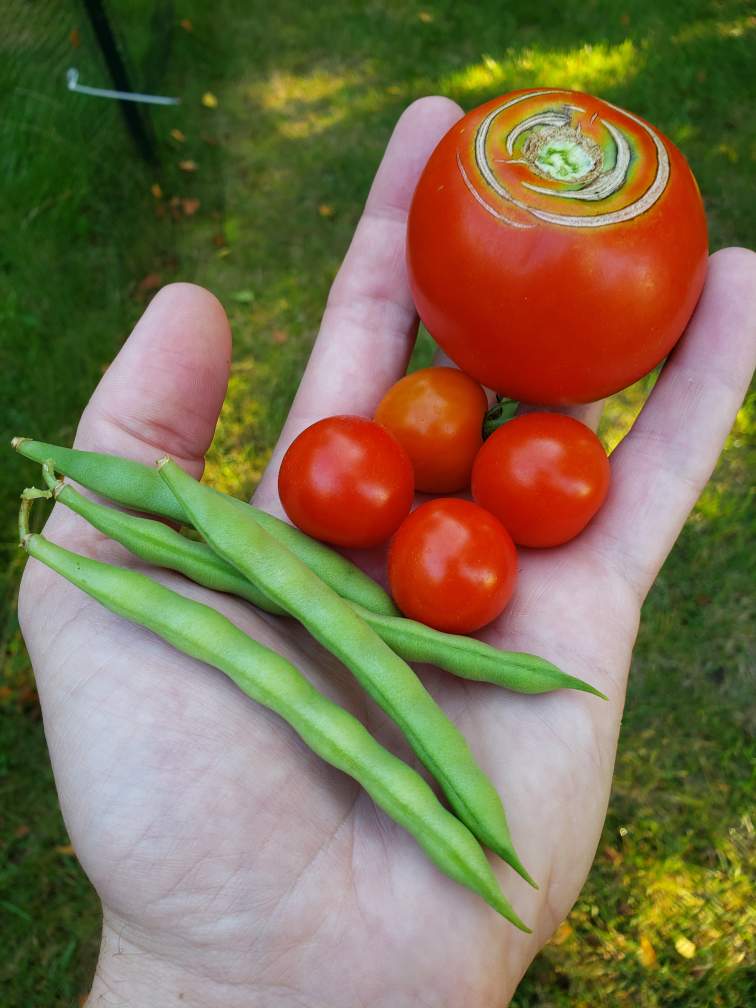 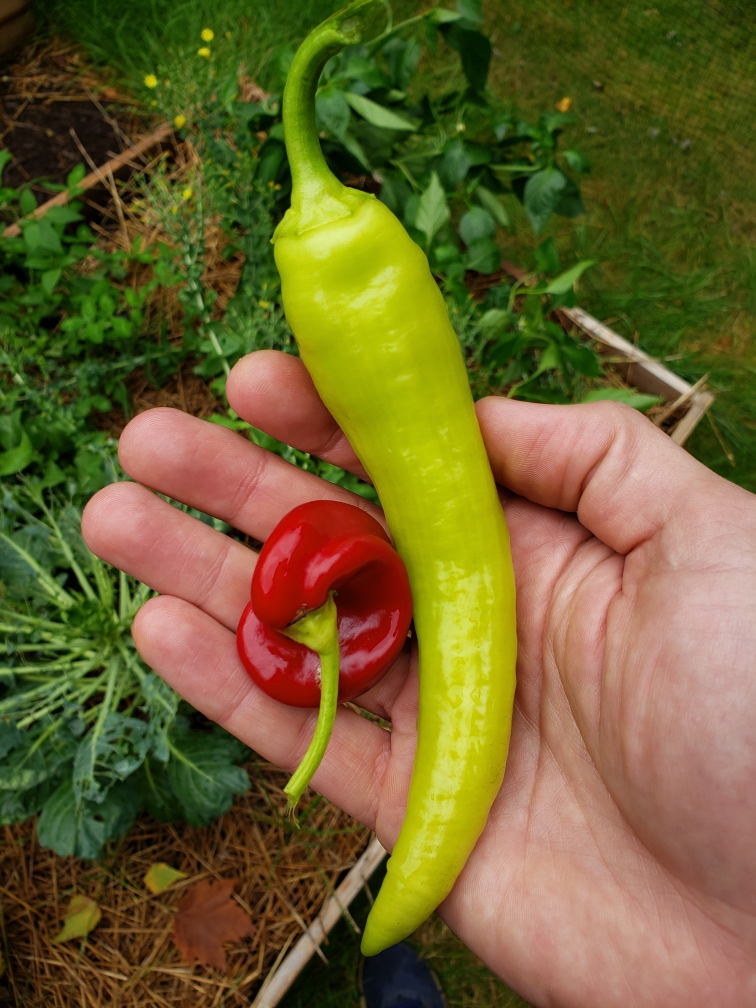 There hasn’t been a whole lot to eat so far, just a few cherry tomatoes, some green beans, two peppers and a couple regular tomatoes. Both peppers came off the same plant, which was supposed to be banana peppers, so I’m still trying to figure out how one came out red and curled and the other long and yellow. 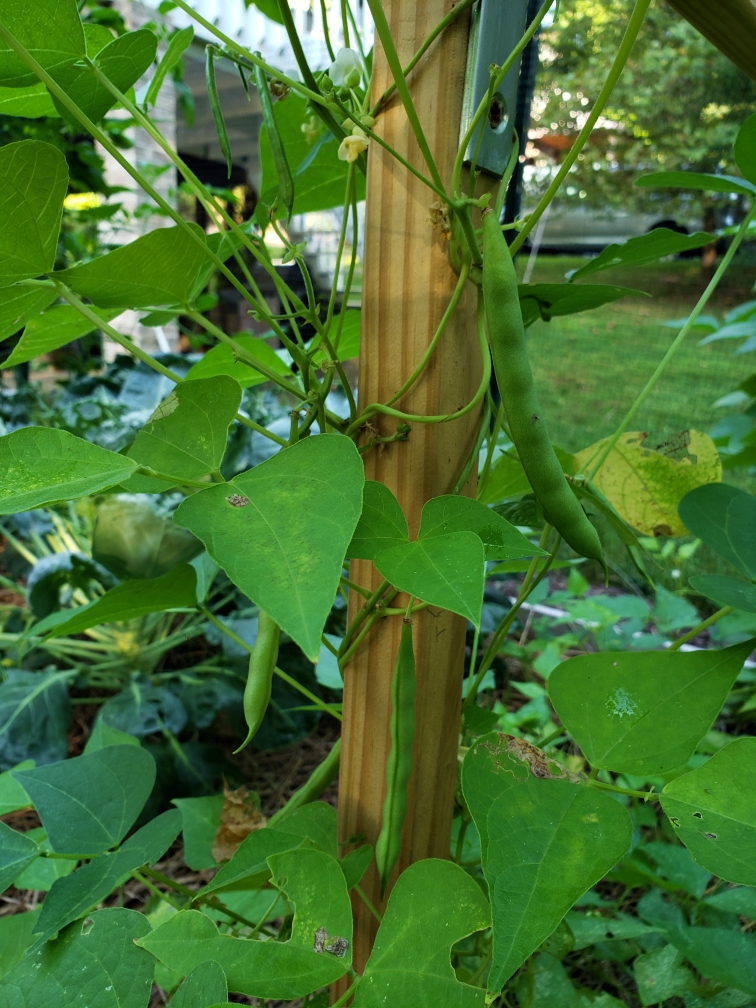 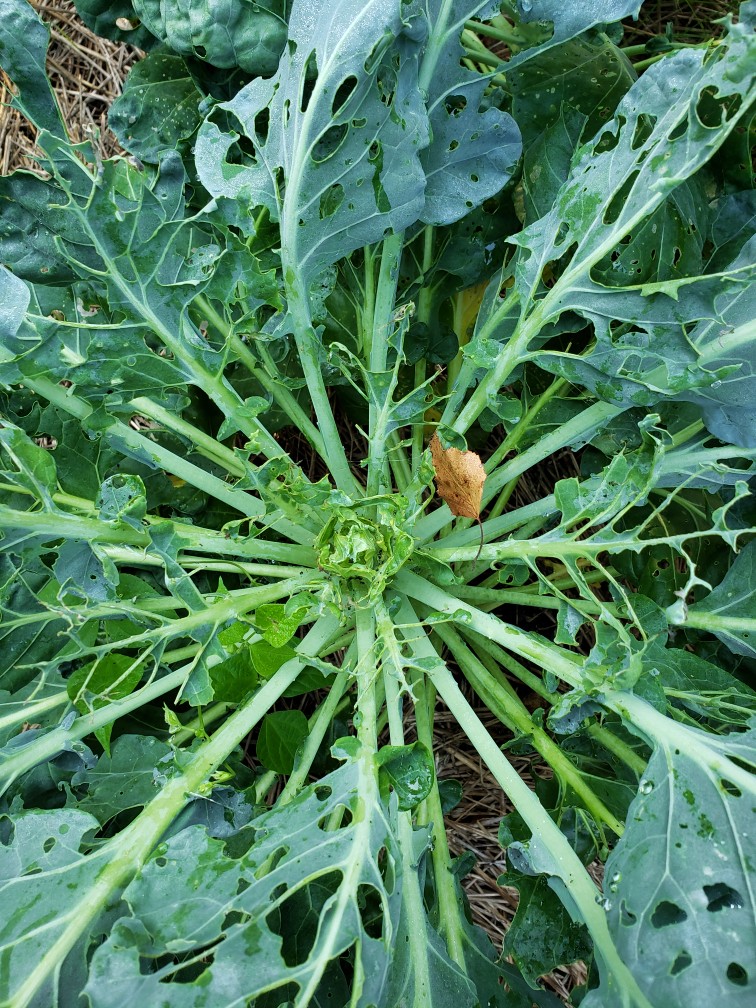 Some plants are still going strong. My green beans really shot up once they were able to climb the trellis. I definitely messed up, by not having more vertical options for the beans to climb. It looks like the Brussels sprouts are starting to (finally) put on buds, but the leaves have a ton of holes in them. The two pepper plants haven’t really taken off, only growing about a foot tall, with one green pepper on each one.

Doug says: Pole beans always need support, but maybe think about a crop of bush beans next year. The leaves look to be defoliated by cabbage worms. Take a close look during the day to see if there are any green worms on the plant. Captain Jack’s Dead Bug Brew and handpicking will get the situation under control. The red pepper is probably the same variety, but it’s mature. Sometimes they will grow that way and curl around. It would be interesting to compare the flavor and heat if it’s a hot pepper. 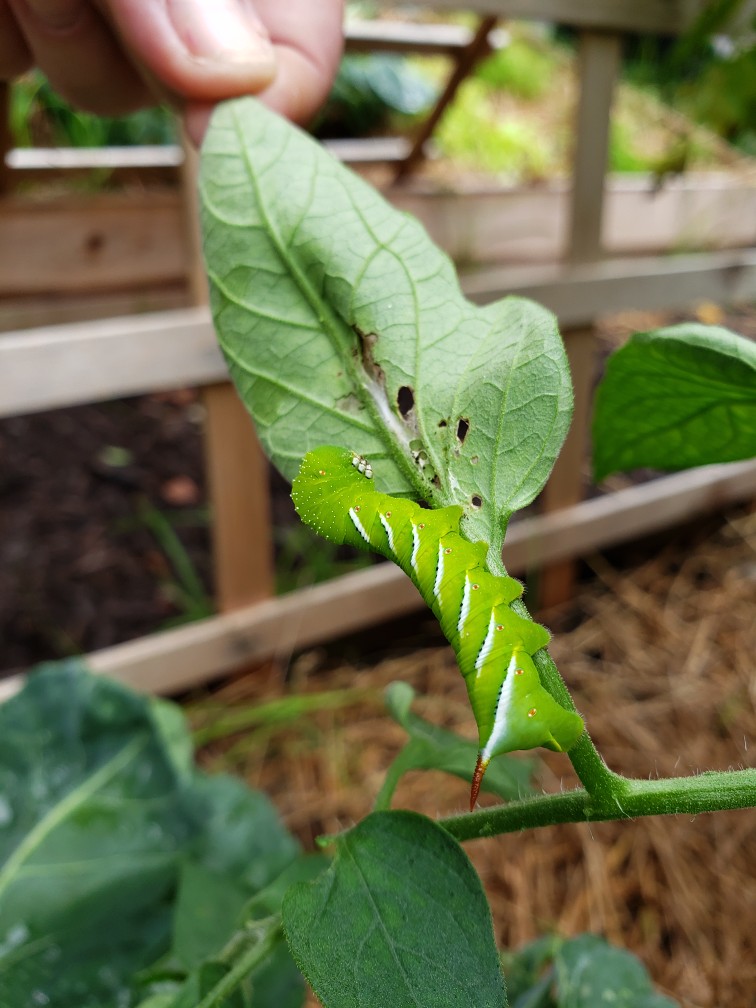 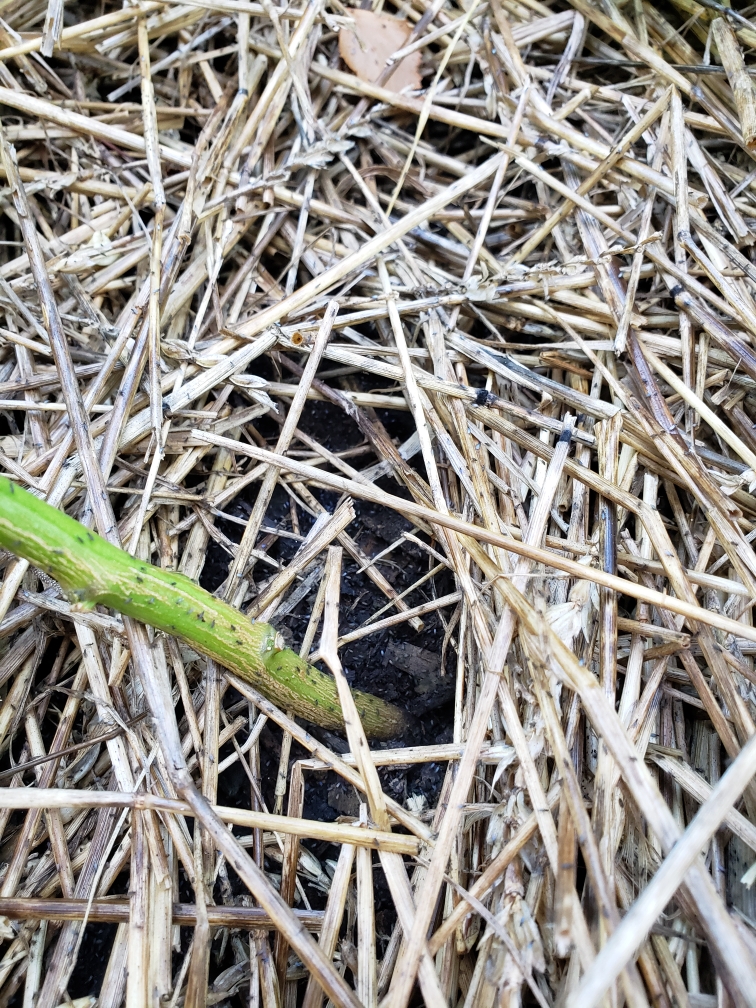 I’ve also spotted some bugs in the garden, that I wasn’t quite sure how to handle. This ugly little critter on a tomato plant (on the left) is a tomato hornworm. I also found a massive infestation of ants on one of the pepper plants. (The photo, unfortunately, doesn’t do it justice.)

Doug says: Handpicking is the best control for tomato hornworms. There are usually only a few, but they can do damage. Don’t worry about the ants at this point. They might have a nest underneath the peppers, you can find out at the end of the season. 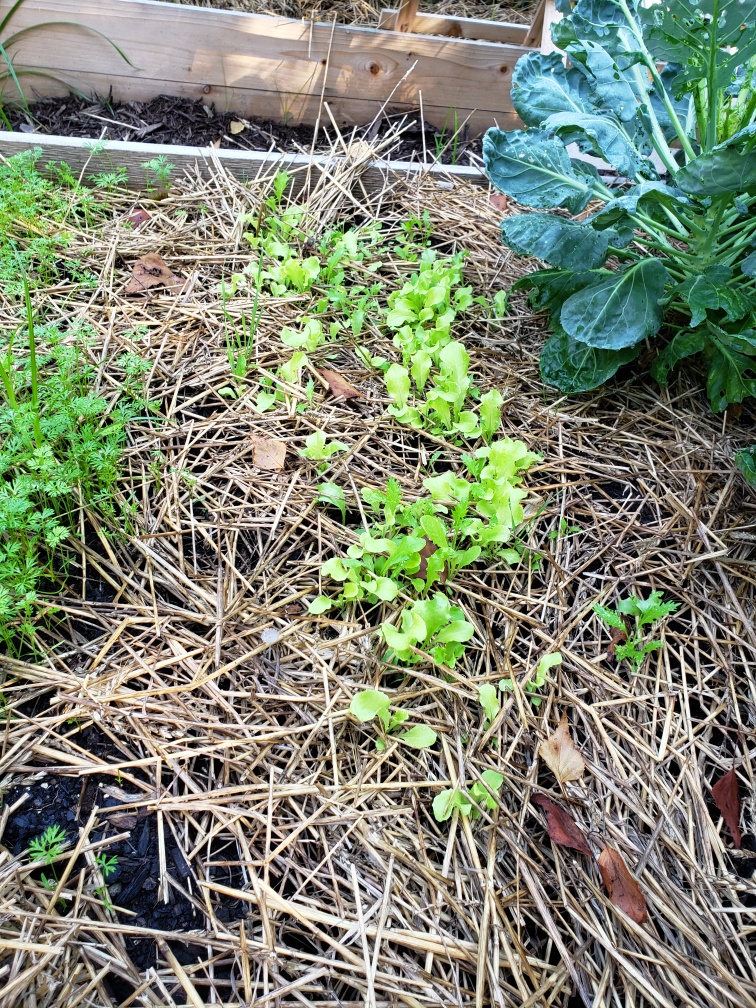 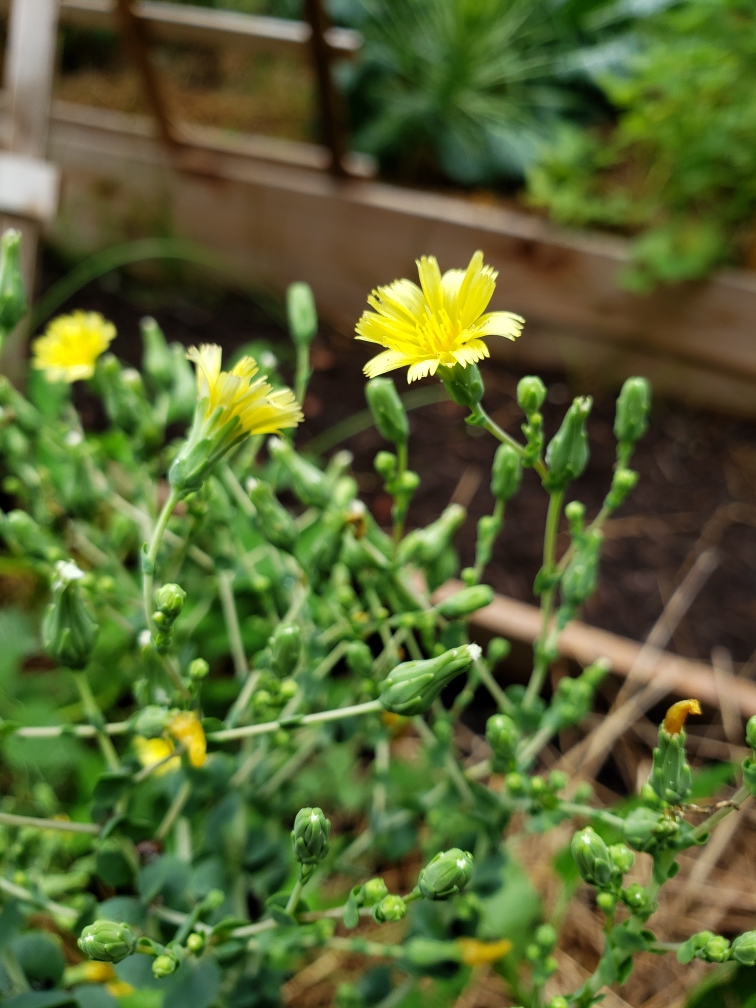 And looking forward to more vegetables in the fall, I put in some carrot seeds next some more lettuce seeds. They’re coming in nicely after all that rain, but I know that thinning them down so they’re less crowded is on my to-do list. In the craziness of summer, I accidentally let a few lettuce plants go, and they got pretty tall. And they’ve even flowered, which I had I never seen before.

Doug says: Those flowers will be become seed. Watch the plant and harvest the seed right before they fall out of the seed pods. Put them in a labelled paper envelope and either save them for next year or plant some for a winter crop. Some gardeners just let them go and self sow, sprouting when they are ready. Looks like a really good first season!

In the next few weeks, I’m hoping the tomatoes start to get red before the cold comes in. Does it mean I’m officially a gardener if I had a dream that it was snowing and I went outside to protect the tomatoes?

Part 7: Vacation Return Brings a Few Vegetables And A Letdown

See also, Monarch Butterflies Get Help From Local Woman Who Is Raising And Releasing Them Into The Wild