Fat green, white and black monarch caterpillars climbed all over the milkweed plants along the driveway of Karrie Klug’s Slickville home. She was thrilled, gently removing just three of them and some milkweed for nourishment to display in a container at the Mr. Tire store in Latrobe that she manages. She was determined to raise them to adulthood and then watch as the others on the plant grew. 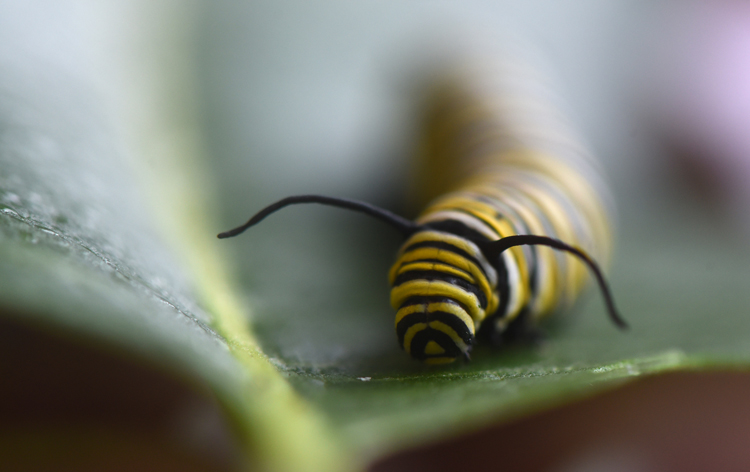 Karrie Klug of Slickville, Pa in Westmoreland County has been raising monarch butterflies from eggs and caterpillars in an effort to help the species. She hopes to release around 200 by the end of the season. This caterpillar has fed on milkweed and will soon make the transformation to a butterfly. Photos by Doug Oster

“It’s a good conversation starter, and it’s great to spread the word (about the plight of monarchs),” she says with a smile.”
But when she returned home all her outdoor caterpillars were gone, probably feasted on by predators.
“I was heartbroken,” she lamented. “After a couple more days, I found more eggs and brought them inside.”
That started a healthy obsession of raising monarch caterpillars to maturity and then releasing them as adult butterflies. Through her research she discovered that in the wild, caterpillars only have a three to five percent chance of surviving.
“It was a wake-up call,” she says. “If I can bring them in and give them better odds, why not?”
The 32-year-old was inspired as a child by her mom to help the species thrive.
“When I was little, my mother raised a couple on the kitchen counter,” she says.
Her mother also let milkweed persist in her garden.
“When anybody asked her, ‘Why are you growing a weed in your flowerbed?’ she would say, ‘I’m helping the monarchs,’ it just kind of stuck with me,” Klug says. 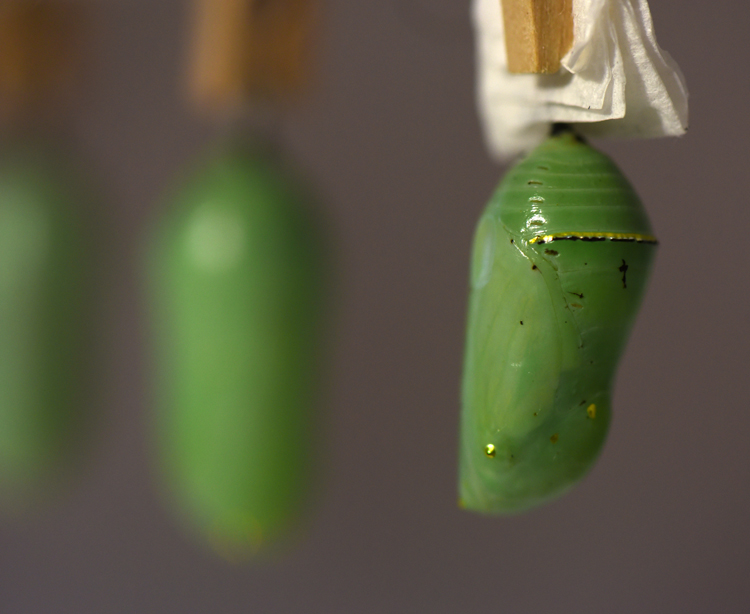 This is one of the chrysalis that will become a butterfly.

Inside the house are more than 50 beautiful green chrysalis hanging from tiny clothes pins. Over by the window, striped monarch caterpillars in various stages of growth are enjoying milkweed plants as they prepare for their spectacular metamorphosis. 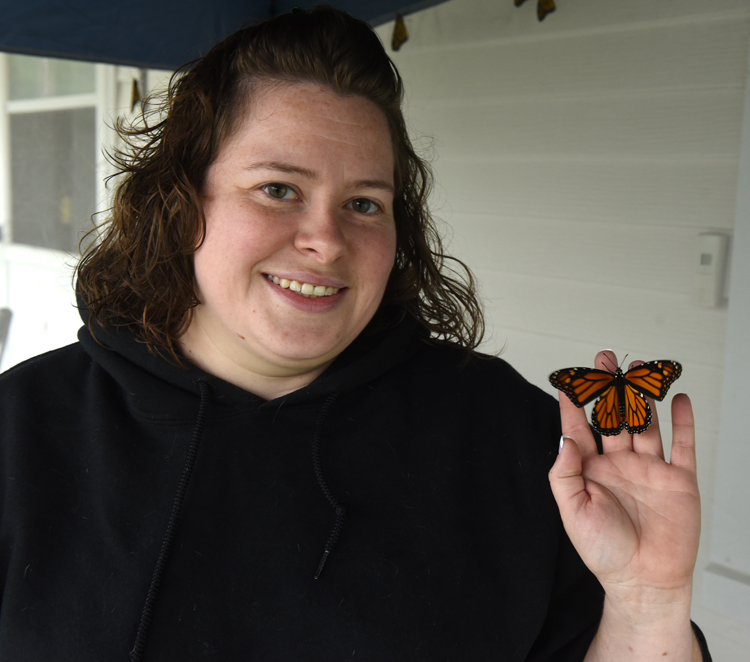 Karrie Klug of Slickville, Pa in Westmoreland County has been raising monarch butterflies from eggs and caterpillars in an effort to help the species. She hopes to release around 200 by the end of the season. 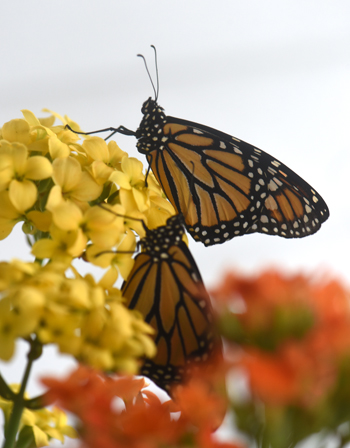 These adults are inside a screened in area on her front porch and will be releases soon.

When the caterpillars are done feeding, they will leave the plant to make a chrysalis. At first they climb and attach themselves to a leaf, branch or in this case, the top of the screened container. The caterpillar curls into a J shape and starts to shed. They don’t spin a cocoon — the chrysalis is actually their living skin.
“It’s truly amazing,” she says of the transformation.
They are bright vivid green with little gold specks, she says of the chrysalis. In nine to 14 days, the orange and black butterfly emerges and in another day will be ready to forage for nectar and then migrate to Mexico.
On the front porch sits a screened-in canopy that’s a safe haven for her monarch butterflies that are inside waiting out a sudden cold snap and the remnants of Tropical Storm Gordon.
She’s released seven so far, but there are many more to go back into the wild. It might seem like a lot of work, but Klug enjoys the challenge.
“It takes some time, being as I have so many,” she says of caring for the insects. “I’ve vowed never to leave one outside.”
There are 15 milkweed plants on her property where she’ll find eggs or caterpillars. She’s also searching for plants out in the wild, looking for the white eggs and caterpillars along with a food source for them.
She’s been tagging the butterflies before releasing them too, as a part of a program from Monarchwatch.com. The tags are a way to record how many butterflies are making it to their wintering grounds.
“Over the last two decades,” Klug says, “their population has dropped about 80 percent.”
She’s not alone in wanting to help the butterflies; it’s become a trend for people to help the species by raising them indoors.
“I have the space, the availability and the will to do it,” she adds. “I spread the word to help the monarchs. If I have a better survival rate inside, then they have a better opportunity to get where they are going.”
She hopes to release around 200 by the end of the season.
“The first two I raised, I took them down to the neighbor,” Klug says smiling. “She’s 96 and I let her release them. She was just so happy, it made her day.”
“Anybody can do it,” she adds. “They don’t have to go as far as raising the caterpillars, just plant milkweed.”

This garden at the Pittsburgh Zoo and PPG aquarium is for pollinators.