Patricia: It looks like a berry, and I see it everywhere growing wild. I know I should know this, but what is it?

Doug: That’s something called pokeweed, and the berries are toxic to mammals including people. They increase in toxicity as they mature. Birds though are not affected and will eat the berries.

Kelly: I took these two pictures of an asclepias in my garden tonight. One shot shows a butterfly caterpillar (exciting). The other shot shows tons of little yellow moving bugs of some sort. There is also a real or fake ladybug in the shot. What are all the yellow things? Aphids?

Doug: Yes, those are aphids, no big deal. I would use insecticidal soap or horticultural oil to deal with them. That’s the organic control, so you need to cover the insect with the soap or oil. We don’t want to hurt those monarch caterpillars. 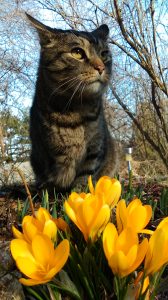 Carla: Voles have been a problem in my garden this year. After first noticing their tunnels several years ago, they have steadily spread throughout my yard. They have killed all of my gladiolus, liatris I’ve had for 15 years, a dianthus, and a ghost geranium I had just rescued from an end-of-season sale. What is the best way to control them? My 3-legged cat can’t keep up (but he tries)!

Doug: Voles can have colonies as big as 400 and since they are vegetarians, they can be devastating in the garden. There’s a product call Mole Scram that will get rid of them. It’s not a poison — it uses castor oil and garlic to repel them. Put down a band of the granules close to the house and then add another band each day to force the voles to another area.

More From Everybody Gardens

See also, Monarch Butterflies Get Help From Local Woman Who Is Raising Them And Releasing Them Into The Wild

Doug Oster is manager and editor of Everybody Gardens with a passion for gardening and a love of sharing is experiences with other gardeners. You will also find Doug’s gardening contributions in the Tribune-Review each week. He’s an Emmy Award winning producer, television host and writer. Oster is co-host of The Organic Gardeners Radio show every Sunday morning at 7 a.m. on KDKA radio in Pittsburgh. Oster’s Outstanding Documentary Emmy was awarded for Gardens of Pennsylvania, a one hour special he conceived and produced for the PBS affiliate WQED. Doug appears every Thursday morning on KDKA-TV’s Pittsburgh Today live at 9 a.m. “Gardening is fun, he says, enjoy every day spent outside tending vegetables, flowers, shrubs and trees.”