Magnolia Plantation tells a story of 2 histories: 1 of beautiful gardens, 1 of slavery

Herb Frazier has spent a lifetime telling important stories, first as a newspaper journalist and now as public relations 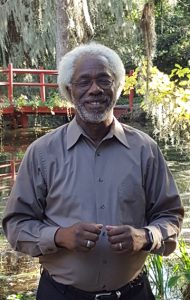 director for Magnolia Plantation and Gardens in Charleston, South Carolina. It’s America’s oldest public garden, founded in 1676 by the Drayton family. It opened its doors to everyone in 1870, becoming Charleston’s earliest tourist attraction.
“Working in such a beautiful place, when you step out it lowers your blood pressure,” he says laughing. “When you walk out on a remote part of the garden, you don’t hear any sounds of the 21st century, you just hear the sounds of nature.”
The historic gardens covers 500 acres. Originally the plantation stretched over 2,000 acres, but the land was sold off after the Civil War. Filled with azaleas and a prized collection of camellias, along with countless mature specimens of beautiful trees, shrubs and plants, the plantation is a showplace of horticulture.
“Every direction you turn you see a different image and every season it looks different,” Frazier says with a smile.
The White Bridge from 1840 is iconic and one of the most photographed parts of the garden. There is also the Audubon Swamp Garden, which provides habitat for waterfowl and migratory birds, the Plantation House, a zoo and nature center, and much more.
“We try to use Magnolia as an outdoor laboratory,” Frazier says of the gardens, “a classroom not only for history but for nature.”
A recently launched Children’s Garden devoted to kids will be part of a 20-acre complex including a youth campground, nature trails, places for programs on edible plants, pollinators and more. 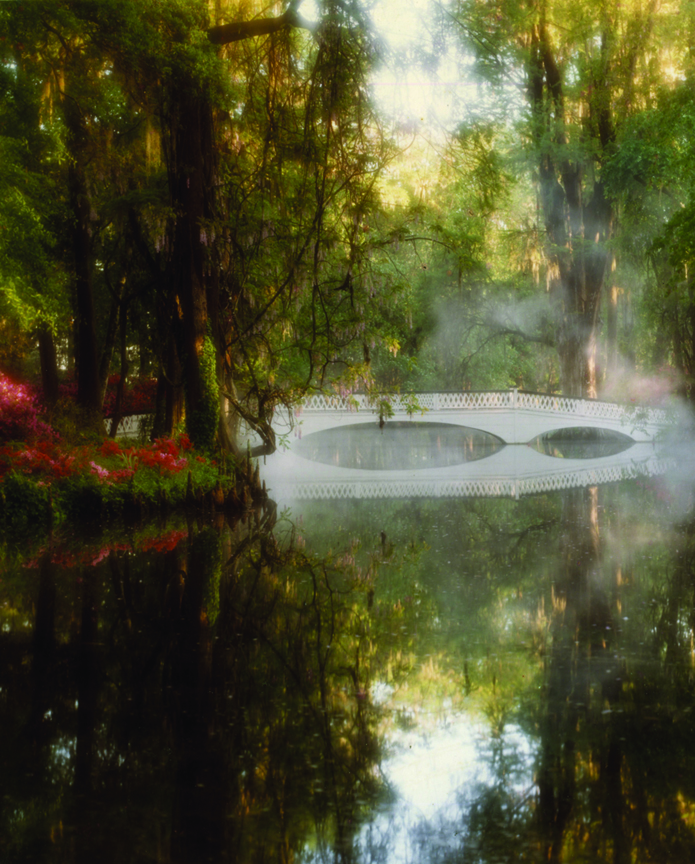 Magnolia Plantation and Gardens in Charleston, SC., is the oldest public garden in the country, opening its doors in 1870. The iconic White Bridge is one of the most photographed parts of the garden, it was built in 1840.

One popular event each July is a ladybug release that draws hundreds of families. The ladybugs help keep the bad bugs in check naturally.
“Throughout the year, we hold special programing geared to families with children; that’s very fulfilling,” Frazier says with a smile. 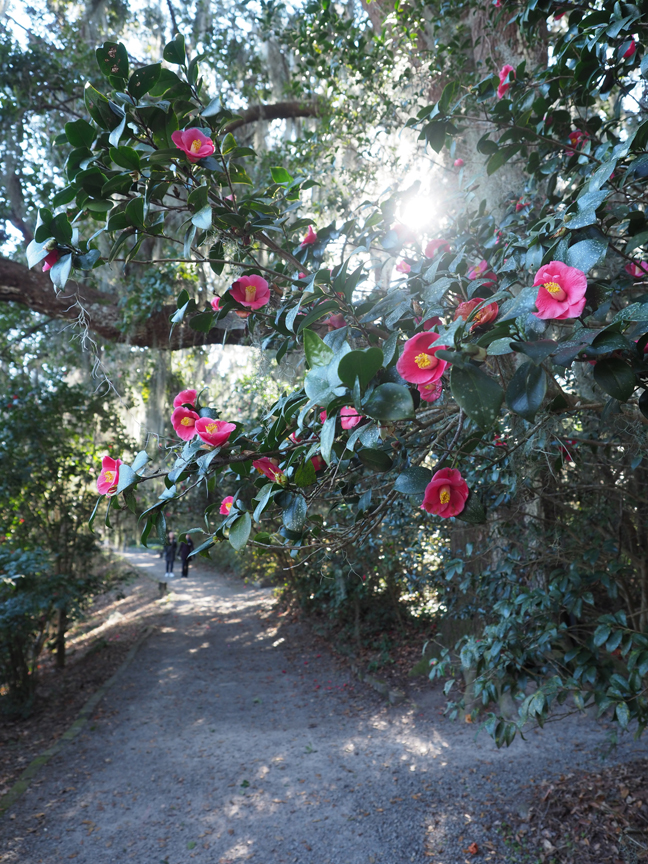 One of the highlights of the garden is the historic camellia collection. It’s a plant that is hardy in the south, but hard to grow in the north. 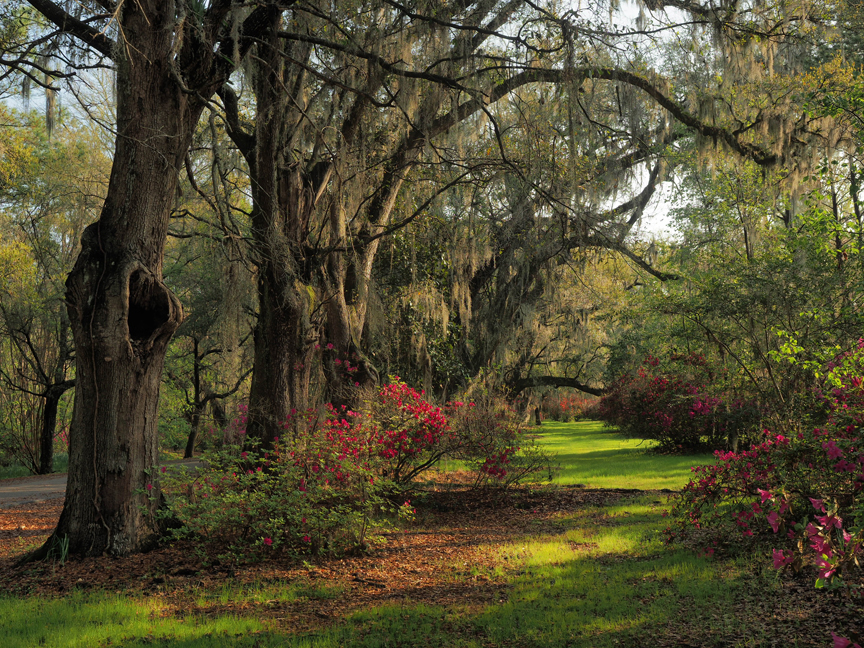 Magnolia tells two stories though: The history of the Drayton family that owned the property since its inception, as well as the connection with African-American families who first worked here as slaves. Many continued at Magnolia through reconstructions, and some black families still have connections back to the early 1900s.
“I think the majority of people of African decent who come to Magnolia understand the importance of preserving this history,” Frazier says. 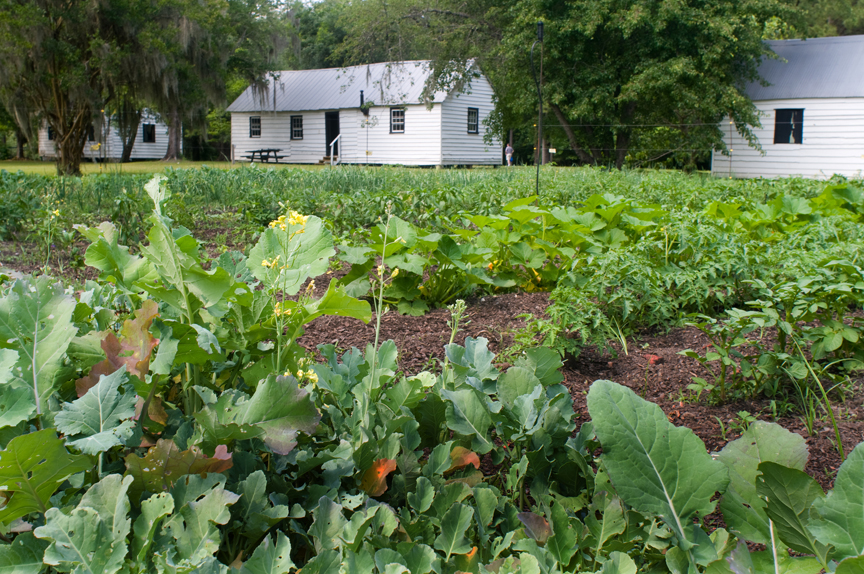 The From Slavery to Freedom: The Magnolia Cabin Project at the plantation preserves five historic structures that date back to 1850. These former slave dwellings now serve as a reminder of what life was like for the enslaved workers.
“I understand the contributions that people who were brought here against their will and the role that they played in a variety of areas to build a society in Charleston,” says Frazier, who is black. “I feel it’s important for us to tell that story, to pay homage to our ancestors and to recognize the sacrifices and contributions they made. If someone doesn’t do it, it’s a part of American history that will be overlooked.”
The workers created something completely unique at Magnolia.
“What we have is a density of plant material that you don’t see at the gardens,” Frazier adds. “The African workers before emancipation, they just placed everything really close together. As a consequence we have some camellias 10 to 12 feet tall. The collection is enormous.”
Frazier had an epiphany while spending time photographing the garden.
“It dawned on me one day,” he says. “It hit me like a ton of bricks that the images I capture are the images that are overplayed on a living canvas that was developed and maintained through the generation by enslaved people. Somebody had to dig the earth out to create the pods, someone had to bank the soil to create the dikes that once held the water in these rice fields.” 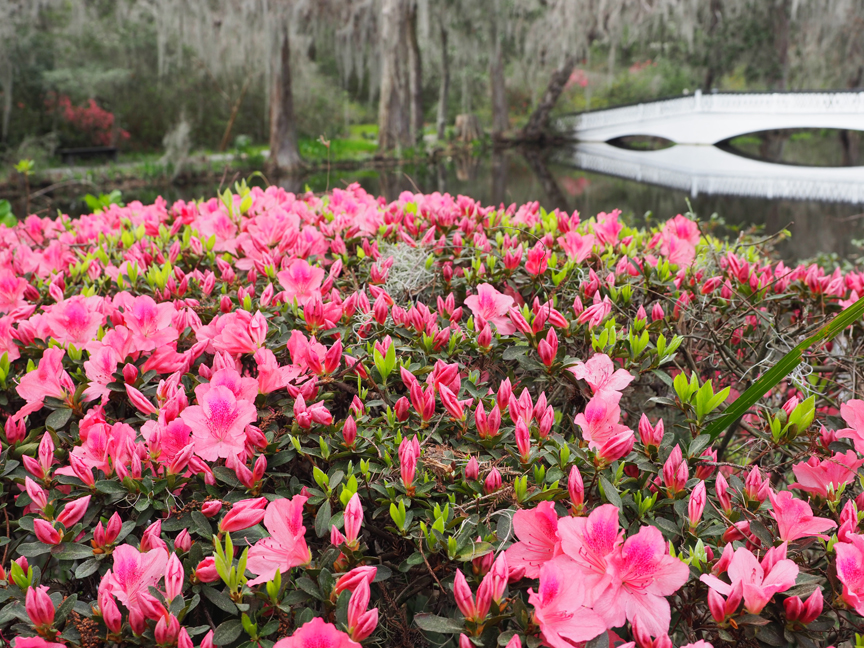 The garden is filled with azaleas, these are blooming in front of the famed White Bridge built in 1840.

He wants visitors to enjoy the beauty and majesty of the amazing property, but he also wants them to remember how it came to be.
“It’s a living legacy,” he says. “Hopefully people can overlook the pain of what happened here. We’re not trying to whitewash slavery or say it didn’t exist. It’s something that needs to be recognized so their labor and their sacrifices will not go in vain.”
Doug Oster is editor of Everybody Gardens, a website operated by 535Media, LLC. Reach him at 412-965-3278 or doster@535mediallc.com. See other stories, videos, blogs, tips and more at everybodygardens.com.