A cool soft rain begins to fall as L.G. “Spike” Walters proudly gives a tour of his nearly 20-acre woodland garden in Penn Township, outside of Butler, Pennsylvania. It’s one of at least three “rounds” he performs daily to see the rhododendrons as the flowers change. The 85-year-old takes long, powerful steps along the edge of the road in front of his property. He then turns to ask, “Are you OK to walk?” as I fall behind the spry gardener who now has reached the foot of a wooden bridge that crosses a creek. 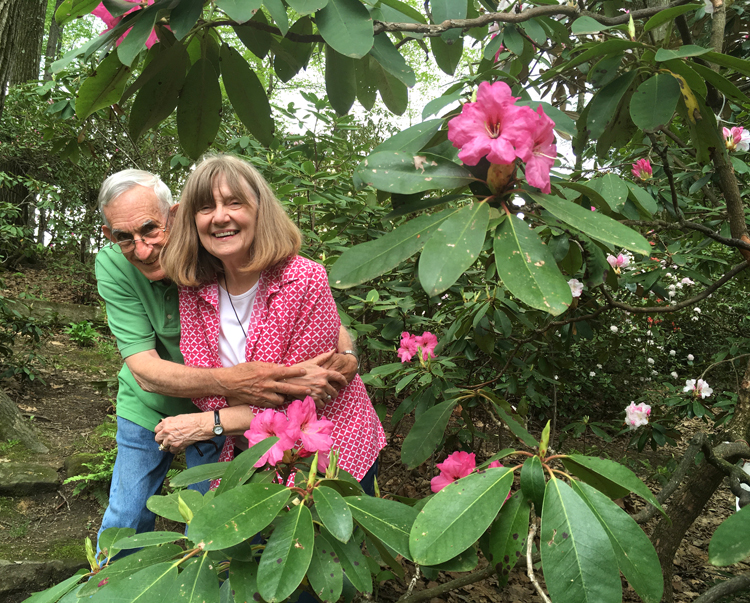 L.G. (Spike) Walters and his wife Kay pose with a beautiful rhododendron in their Butler garden. 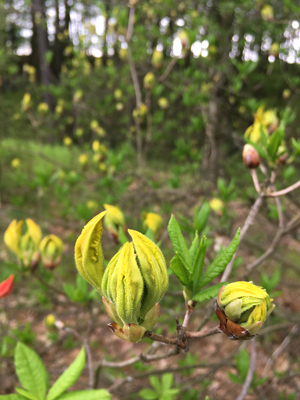 This unnamed yellow azalea is about to bloom in the garden of L.G. (Spike) Walters.

The retired dentist’s hillsides are filled with rhododendrons, azaleas, wildflowers and more. A huge display of pink, red and white primrose lines the banks of the small stream tricking through the valley.
He’s spent a lifetime infatuated with rhododendrons and azaleas, breeding many different cultivars. Walters is a renaissance man; part gardener, plant breeder, photographer, and writer. He points out the plants, explaining who bred them, what they were crossed with and the name of each cultivar.
His own creations though, are unnamed. When asked why, he pauses and humbly answers, “I don’t know, I don’t have enough respect for myself as being able to develop something that’s better than someone else’s.”
He knew most of the hybridizers through the decades, and his garden is filled with their successes, too. Walters loves to tell stories about the plants and the breeders who created them. Not every hybrid works though, as Walters reminisces about a friend who crossed two exceptional varieties. Looking down at the plant years later, Walters asked him, “what did you name it?” His friend replied, “Damn shame.”
His obsession began at his boyhood home in Mars with one azalea. “Everyone in town came to see that azalea when it bloomed,” he said proudly.”
The plant came from Homer Stokes, a local nurseryman who inspired Walters. Stokes would play ukulele by a pot-bellied stove as the two would share pecans while talking about plants. The nursery has been gone for years.
“I decided to do some hybridizing like him,” Walters said. “It’s kind of easy; you just take the pollen off one plant and put it on another.”
Once the pollen on a plant is crossed, it makes seeds which are planted. In the case of azaleas, they will bloom in about three years; for rhododendrons it could take as long as six.
His father loved rhodies too, and he met Lanny Pride, another local nurseryman who became a lifelong gardening friend before passing away in 1983. All the other plant lovers he’s befriended over the years have helped in his evolution as a plantsman.
Walters bought the property — part of a 160-acre farm — from his dad. He chose the location for the north-facing slope, which now is covered in a beautiful show of spring flowers for as far as the eye can see. He’s got the perfect place for his beloved plants and when asked for details on planting techniques he answers, “Sometimes I just drop them on the ground, step back and let them take over.” 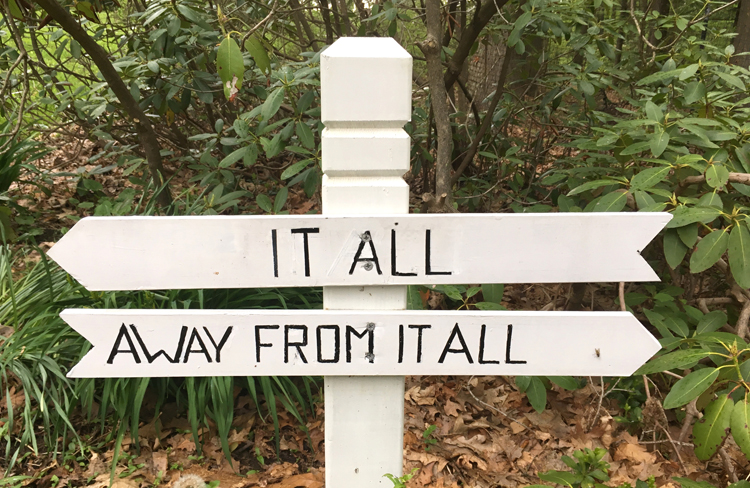 One sign points to the garden, the other to the road. Which one points which direction at L.G. (Spike) Walters’ Butler garden? 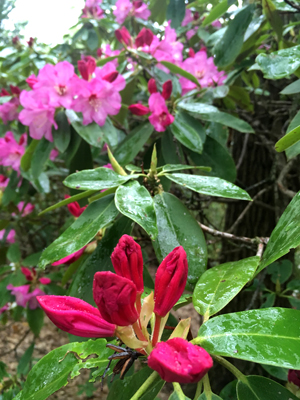 Every day brings new surprises as flowers open in the woodland garden of L.G. (Spike) Walters.

He’s not breeding these plants to put in a catalog — they are all for his enjoyment, along with his family, friends and visitors.
“I like to create something special, it’s an ego thing,” he says with a smile. “I don’t do anything that’s for anyone else or something that I’m going to make a profit on.”
The earliest blooming and most hardy rhododendron in his collection is named for his mother, Thres Walters. He found the plant at Pride’s nursery; transfixed by the color, Walters brought it home. When Pride visited, he loved the plant and recommended they name it for his mother. In the brutal winter of 1977, ‘Thres Walters’ bloomed but other well-known hardy varieties froze.
Yellow is the Holy Grail color for a rhododendron breeder, and there have been a few that have come close. The varieties in Walters’ garden thought are “rhododendron yellow,” he says. “You have to really want to see yellow to see it,” he says, laughing.
The woodland garden is also filled with more than 80 different hostas, a host of ferns, miniature iris, shrubs, trees of all kinds and much more.
Becoming an authority on these plants, he says, comes from all his gardening friends met over the years.
“I’ve done it by attrition,” he says with his trademark grin. “All the people who knew everything are all dead now, and I’m the last left.”