Japanese Courtyard Garden at Phipps gets refreshed by original designer

The calming sound of soft running water is ever-present throughout the Japanese Courtyard Garden at Phipps Conservatory and Botanical Gardens. 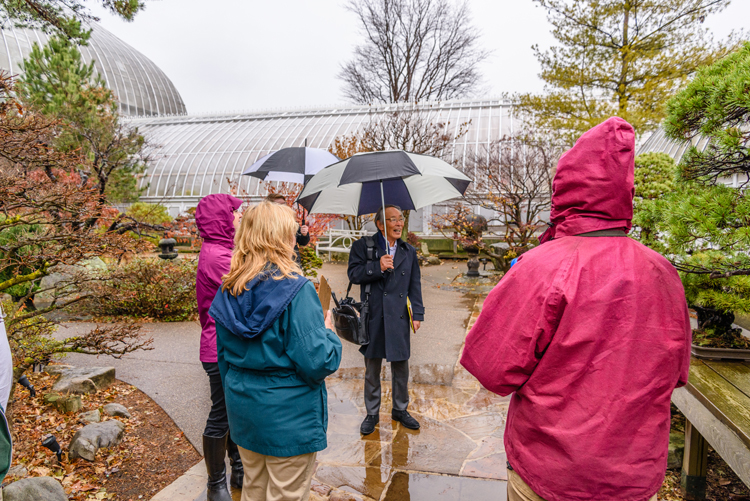 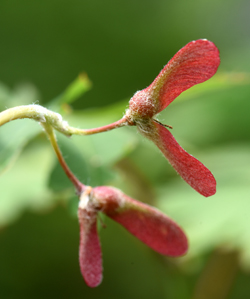 The red seeds of a Japanese maple in the Japanese Courtyard Garden at Phipps Conservatory and Botanical Gardens.

Designed in 1991 by famed Japanese landscape designer Hoichi Kurisu, the outdoor garden is a hidden gem, as not every visitor discovers the space. Those who do are rewarded with a secluded space where koi rise to the surface of a pond under branches and deep red leaves of Japanese maples. Kuriso returned to the garden for the first time last December to meet with the horticulture team at the conservatory in an effort to refresh the space as part of the year-long 125th anniversary celebration of Phipps.
In May, his team worked with the staff who oversee the garden to prune the trees and do other work, spending four days there.
“We were excited for the opportunity to bring a refreshed energy to this special place, enhancing the experience of all those who visit,” Kurisu said. “I think people will feel the difference.”
For Jessica Horenstein and Kevin Haughey, who both help tend the garden, the prospect of Kurisu and his team rehabbing the garden was a little intimidating.
Haughey is a display horticulturist who cares for the garden and also spends much of his time making sure the 100 or so bonsai trees thrive. He’s been fascinated with the art of bonsai since 1986 and has been doing it here since 1998. He wondered what the designer would think of his work, but was pleasantly surprised after meeting Kurisu and his team.
“The whole time I was worried and had my fingers crossed,” he said with a laugh. “He seemed to think we were on the right track; all it needed was some maintenance from his team.”
Horenstein also had concerns before Kurisu arrived, but they were unwarranted.
“You want to make sure you’ve been doing it the right way all these years. Something I was struck by was how positive he was about the garden,” she said. “He said, ‘everything is still in good shape, it just needs to be taken back to the original form.’ His positivity helped drive us all forward in a way that made us confident.”
Within five minutes of entering the garden, pruners were up in the tops of the tallest trees with hand saws. “It’s just something that hasn’t been done to that level since the garden was installed about 30 years ago,” Horenstein added. “It’s kind of like hitting the reset button. There’s specific ways in the Japanese style that you look at something and prune it a certain way.” 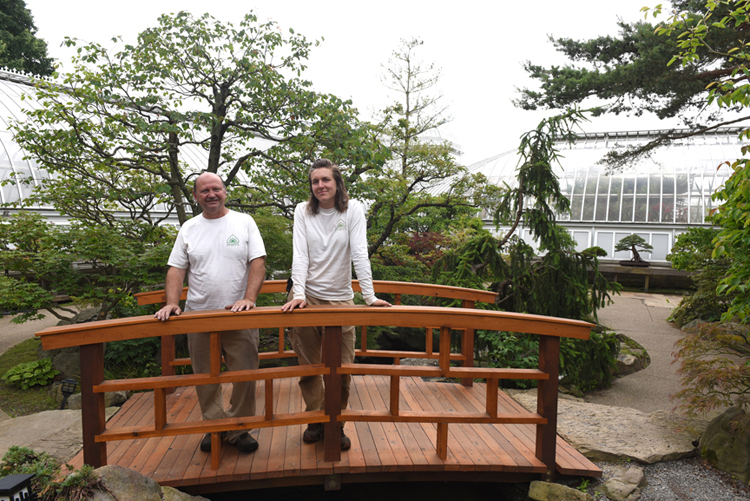 Kevin Haughey and Jessica Horenstein stand on the bridge in the recently refreshed Japanese Courtyard Garden at Phipps Conservatory and Botanical Gardens. Japanese landscape designer Hoichi Kurisu designed the garden in 1991 and then recently returned to tweak the garden with his team.

Looking up at the recently thinned out trees, she counts a Scotch pine, with its orangish bark as her favorite, even agreeing to pose for a photo hugging the massive tree.
“Now that you can see it and see the bark, I think it’s a lovely focal centerpiece for this garden,” she says with a smile. “It was just a man in a tree with a saw, just feeling out which branches needed to come out. It was exciting to watch.”
Haughey is more comfortable with his feet on the ground using tiny sharp scissors making delicate cuts on his treasured Bonsai trees.
“Doing the big tall trees, I’m a little timid about doing that,” he said.
But after seeing the fearless heavy pruning style of Kurisu’s team, he’s going to use it as a template for future care of the garden.
“Look at each tree,” he says. “See how each one has been pruned, it’s a deliberate process. They appreciate trees in a little bit different way that we in the West have been looking at our trees.”
His favorite in the garden is a small, simple Japanese maple in the shadow of a giant pine.
As the gurgling stream flows into a pond surrounded by giant boulders, Horenstein reflects on time spent in this garden after the team had finished.

“I like the spaciousness of seeing through and on to other vistas,” she says. “I feel you can kind of stretch and breathe and listen to the water. I think it is one of our more serene gardens I like coming out here to relax.”
She wants gardeners to get the same thing she does from the garden.
“I hope they can find a way through this garden to connect with nature,” she says. “You can come meditate and look at things from a different perspective.” 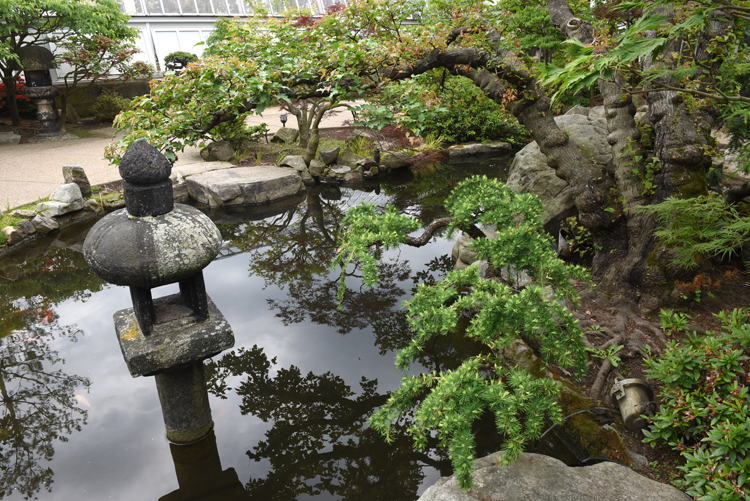 Trees are reflected in the pond at the Japanese Courtyard Garden at Phipps Conservatory and Botanical Gardens.

Japanese maples with deep red seeds and colorful new growth fill the garden along with small pines that stretch their branches over the pond. A curved wooden bridge straddles the stream, and there’s a trail that takes visitors to the back of the garden. Twenty-five of Haughey’s carefully pruned bonsai surround the garden, displayed on wooden benches along the sides of the walking areas. The bonsai displayed in consort with the rest of the garden was something Kurisu was impressed with.
“It’s rare to find a display of bonsai of this caliber within a Japanese garden,” he says. “While the essence of the bonsai culture is to artfully emulate nature and allow you to view it from a broader perspective, the courtyard garden accomplishes this while simultaneously being immersed within it. This contrast creates a unique harmony between micro and macro perspectives.”
It was a wonderful learning experience for Haughey, too. “Seeing what they did to the garden, it was really a joy to see,” he says smiling. “I’m going to try to maintain what they have started — the separation of branches, the lines of the trees. They went back to the basics, instead of worrying about taking out too much.”