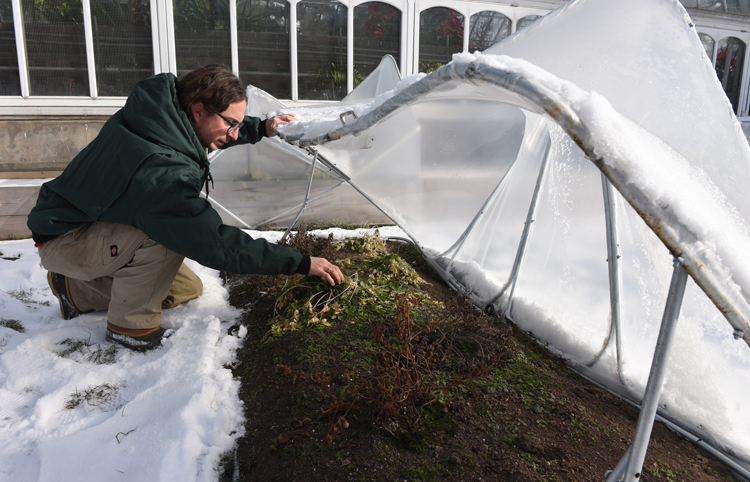 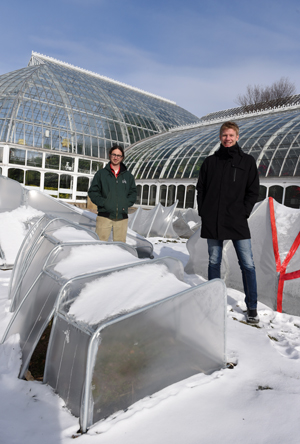 Michael Bechtel (left), edibles coordinator at Phipps and Joshua Bard, assistant professor at CMU’s School of Architecture worked together with students from CMU to create these unique cold frames.

The edibles coordinator at Phipps Conservatory and Botanical Gardens is checking out what’s remained under cover on the Rooftop Edible Garden he maintains.

Architecture students from Carnegie Mellon University created the hoop houses as part of a collaborative project with Phipps. Teams of students designed each of the unique structures, and they have become a topic of conversation with visitors to the garden since they were installed in October.

“(The guests) love them,” Bechtel says.

“Visually they are pretty cool,” he adds, “but I also thought the way they are designed, with certain shapes, that they might stand up to the elements a little better than some of the traditional cold frames.”

Herbs like parsley, rosemary and thyme were planted and then covered with the cold frames. Bechtel had experimented with plastic hoop houses up here before —with some success — but these are holding up to the elements much better.

“I was really pleased with the way these turned out,” he says. “It’s opening me up to different styles and materials” for future winter plant protection in the garden.

Bechtel likes the fact that these cold frames create a dialog with the people who come to the garden.

“It’s a talking point,” he says. “People do have interest in extending the season and for aesthetic reasons people like to set up things like that, with the functionality the tunnels provide. I’m always looking for a different way to inspire gardeners.”

Joshua Bard, assistant professor at CMU’s School of Architecture, is also always looking for ways to inspire his students.

“We very much encourage them to take risks,” he says. “We had tons of fun; students love being able to go from design all the way through to something that gets built. That doesn’t often happen in a studio.”

For the past four years, he’s coordinated the second-year undergraduate architecture studio at the university. The studio explores issues of urban agriculture in post-industrial cities or “how architecture can help shape the built environment around these emerging practices,” Bard says. In teams of six to eight, the students designed, constructed and installed the hoop houses. Every team had a different garden bed and took into consideration the angle of the sun, prevailing winds, proximity to the building and other conditions for each specific site.

Each one of the cold frames or hoop houses are shaped distinctively. Some look like something NASA might build on Mars. These structures aren’t just functional; they are beautiful, too. 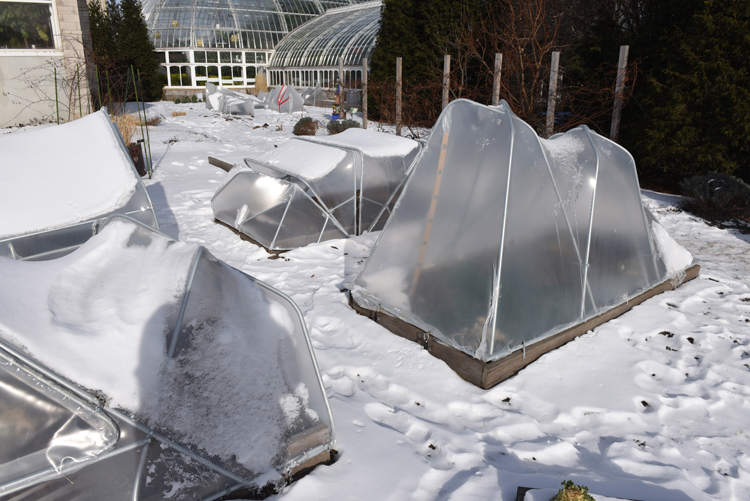 The students cared for their herbs at the start of the school year. They kept them growing until being transplanted to a vertical wall and then into beds toward the end of October. Then the cold frames were installed over the plants. This three-part project started with the plant and then the hoop houses. Finally students considered what a Center for Urban Agriculture would look like at the Sankofa Community Garden in Homewood. The third part of the project is not connected to Phipps.

Bard says there were a lot of functional considerations and experimentation with the creation of the hoop houses as a way of trying to discover what works best in an urban environment. “It doesn’t have quite the iconic status that more typical agrarian landscapes have,” he adds. “A traditional large red barn next to a silo is what we all recognize as a farm, but what should one resemble in the city?

“Part of what we explore in the studio is how can architects and design bring a voice to that, to explore what that might look like because we think it’s going to be an increasingly important part of the makeup of cities moving forward.”