I refer to Tom Walker as the “Garlic King of Millvale.” He’s one of the many people helping the town grow. Walker’s involved with The Gardens of Millvale, a great community garden/farm along with many other projects. His own garden is impressive, and he’s always willing to share a little produce with visitors. He grows his garlic, though, on a farm he runs out east. 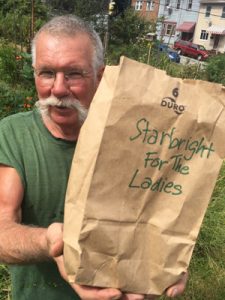 Tom Walker is the “Garlic King of Millvale.” He’s donated two pounds of his homegrown garlic to be planted in the garden at SCI Cambridge Springs, a minimum security women’s prison in Crawford County. Photo by Doug Oster

Every year I buy lots of garlic from him for my own garden, but also to give away to friends. We’ve been friends for a long time, and he heard many tales of my attempts to do a story on a garden at SCI Cambridge Springs in Crawford County. The garden was the brainchild of Valerie Walton, a Penn State Master Gardener. Years ago I was speaking to a gardening group up north and as an aside she mentioned this incredible project.  It took me four years to get permission to get into the prison for a story along with photos and a video. My then-colleague Jasmine Goldband teamed up with me for the visuals.

It was an amazing experience, and I’ve never forgotten the staff and women at the prison. This garden, surrounded by tall fences topped with razor wire, is just as therapeutic as our own gardens. I’ll send seeds to Valerie to help out, but when we ran into each other at a recent master gardener conference, she said the ladies wanted to grow some garlic, too. That’s where Walker comes in; he donated two pounds of a variety called ‘Starbright.’ It’s something the gardeners at SCI Cambridge Springs can plant now and harvest in July.

The original story and video below explain why a garden in a prison helps rehabilitation in so many ways.

A group of women laughs as they pull back lush green tomato leaves, revealing pepper plants growing underneath filled with tiny fruit.

“They look too adorable to eat,” says one.

There is such a feeling of happiness and enthusiasm in this group, it feels infectious. It’s not an uncommon sight in many gardens — the difference here is this one is surrounded by a 20-foot-tall fence topped with razor wire. 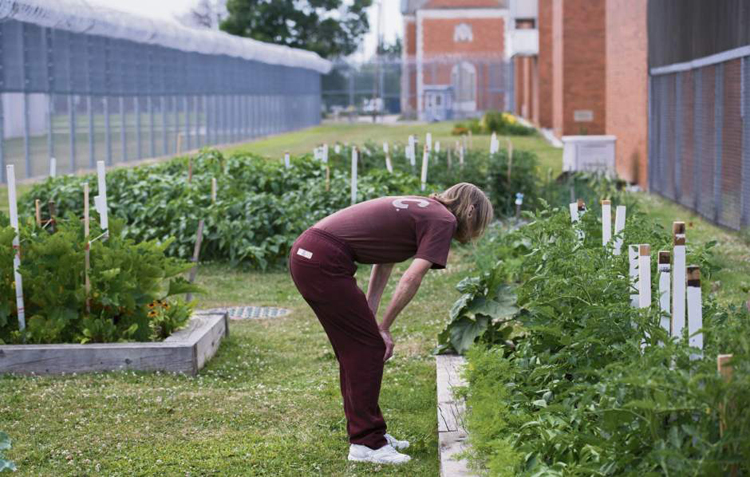 An inmate looks over the garden at SCI Cambridge Springs. Photos by Jasmine Goldband

The vegetable garden at SCI Cambridge Springs has been here for six seasons, and the past four have seen a marked improvement in production with help from Valerie Walton and her team from the Penn State Master Gardeners of Crawford County.

The minimum-security prison in Crawford County houses about 1,200 women. Nearly 140 inmates in the honors unit participate in the garden program.

Debbie, who is an inmate, has gardened here since the beginning.

“I love it,” she says. “I like the food; I also like sharing it and seeing people so happy because it’s been so long since we’ve had really fresh vegetables.”

A small group of lucky inmates gets to tend the garden, but the rest in the unit will enjoy the harvest, too. “We try to plant enough so everybody can get at least a little bit,” Debbie says. Sometimes, that even means a cucumber lottery when there aren’t enough to go around.

There’s something strange that happens when working in a garden planted in the shadow of razor wire, she says. The fence fades away for the hour inmates can spend here.

“This is just my sanctuary,” Debbie says. “Mentally, you’re just away from here.”

When asked why inmates deserve a garden, she smiles and says, “The fact that we have a garden makes people feel good, and because we feel good, we’re on our best behavior.”

Walton was invited here by the staff to coordinate the prison horticultural program. She inherited the raised beds but had an eye on improvement. 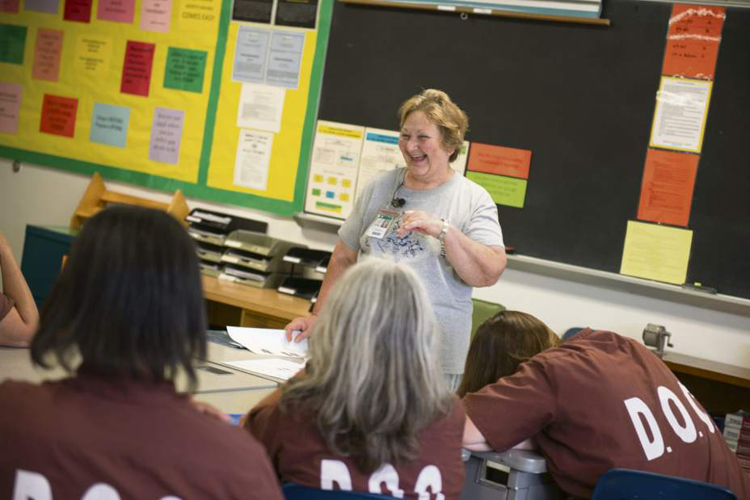 Each January, she begins a 13-week intensive horticulture program that teaches inmates how to garden. She then works with them in the greenhouse getting seeds started. Walton and the other master gardeners are not permitted in the garden; the students are on their own for planting and maintenance.

“It boggles your mind that they are able to assimilate so much,” Walton says of the inmates. “That they can put it into practice without us standing there.”

Her first graduates begged for more information, so now Walton also returns monthly to teach them. Each session is driven by questions from the inmates.

“You’re opening up a whole new world to some of the people who have never had the opportunity,” she says.

The five raised beds are 4 feet by 8 feet, and the inmates have made the most out of them, growing tomatoes, tomatillos, onions, carrots, garlic, greens, kale, squash, cucumbers, herbs, peas, peppers, radishes, beets and much more. There are sunflowers and other flowers tucked into corners; every square inch is used to grow something. The inmates start harvesting early in the spring and are permitted to be in the garden until Dec. 1 for the last harvest of hardy crops.

Walton works closely with them and has seen the difference that time in the garden can make.

“I think if you’re in an environment that’s more pleasant, calming and serene to you, that you may be more interested in changing your lifestyle,” she says.

This day, she is in the prison to talk about aquaponics — using fish to help grow plants. Her students are filled with questions, some of which make their teacher think for a minute. The inquisitive nature and challenge of the job are fulfilling for her.

“It is such a wonderful feeling,” she says. “I have to say, out of all the things I’ve done in my life, this is the most personally rewarding.”

Another inmate, Sable, sits in the classroom wearing her brown prisoner uniform. She longed to work in the garden that teased her from her cell window.

“I’ve gardened ever since I was little,” she says. “I started with my great-grandmother.”

She hates planting but loves weeding and is on the harvest committee. The other committees are planning, maintenance and education. Each season, Sable eagerly awaits the harvesting of the carrots, her favorite since childhood.

“My grandmother always said you’re going to turn into a carrot if you keep eating all those carrots,” she says with a smile. “So carrots are my thing.”

Out in the garden, she kneels down, painstakingly pulling grass that has meandered into the vegetable bed. She surveys the garden with the other inmates as they decide what will be harvested in the next few days.

“When you’ve done something like that, you’re proud,” Sable says. “You helped plant it, weed it, helped it grow, and it gives you a sense of pride. Which is a lot of things that women sometimes don’t have when they come here.”

Melony never gardened before. “I wasn’t interested,” she says.

She started slowly, volunteering to water, and was captivated by the beauty and camaraderie. The veggies didn’t hurt either.

“They showed me my first cucumber and I just went crazy,” Melony says with a laugh.

She’s come a long way since then and is the chairwoman of the planning committee that creates a garden plan for each season’s planting.

“It’s important because it’s healthy. It’s somewhere I feel safe,” she says. “It gives ladies a sense of doing something different. It feels like home; it’s very peaceful for me.”

But the cucumbers are her favorite part of the garden. 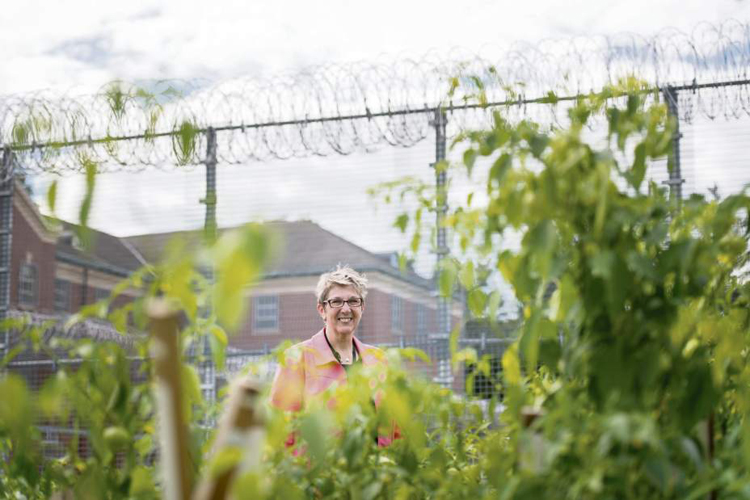 Joanne Torma was the superintendent at SCI Cambridge Springs and supported the horticulture program there.

Superintendent Joanne Torma cherishes cucumbers, too. As a child, her grandfather reserved space for her to plant. “I grew cucumbers, and I can still taste those cucumbers,” she says.

She inherited the garden program when she came here and sees it as a positive for many reasons; one of the most important is preparing the inmates for life outside of these walls.

“Keeping in mind that 90 to 95 percent of the people who are in our prisons are coming back to our communities, I see it as my personal role — and the department sees it as their role — to prepare individuals to be the best citizens that they can be, and a garden is a helpful way to do that,” she says.

She echoes the sentiments of the inmates when discussing the therapeutic power the garden holds. “It provides the opportunity for meditation, reflection and for just some alone time,” she says.

Torma is amazed at the amount of food coming out of that garden. Everyone in the unit has been able to enjoy tomatoes, and there have been lots of other crops shared.

“I was struck by the sheer volume in the limited space,” she says. “The other thing that caught my attention were the sunflower heads and the other flowers that were there to attract the bees. Wow, that’s really pretty smart. I like the way they are doing this. I was just overwhelmed.”

Torma, in conjunction with the state Department of Corrections, has created a progressive rehabilitation program around gardening with the help of Walton and the master gardeners. The question that’s never far away though is why should these prisoners who are being punished have time in a garden?

“I think that every human being needs to understand their value, their contribution and their ability to make a difference,” Torma says. “That garden is one avenue that we can offer for our women to be able to do that.”