Dan Tomcik is inspecting a nice-looking raised bed that is ready and waiting to be planted with a very special garlic as a giant scarecrow looms over the garden. 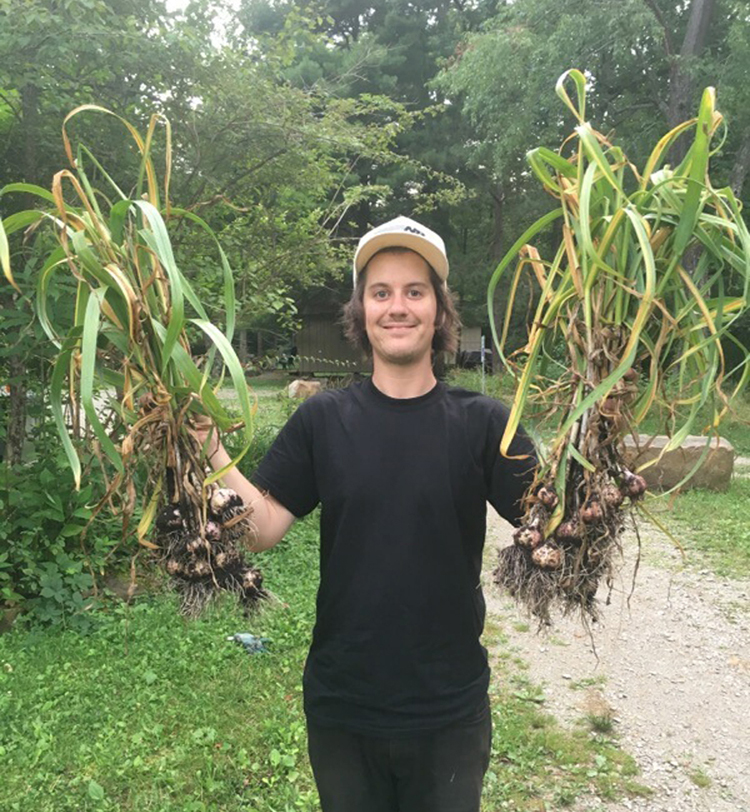 Dan Tomcik shows off his harvest of garlic he inherited from Dennis Gilkey.

This is one of the 26-year-old’s plots in the Fineview Community Garden near his Pittsburgh home, but he cares for another at the Touchtone Center for Crafts in Farmington, where he is facility and grounds manager. He took over the job from Dennis Gilkey, who was retiring and taught the young man all about gardening. Gilkey was growing a variety of garlic that he brought from Italy, still two months away from harvest time, when he retired.
“The only thing I need you to do,” he told Tomcik, “is to keep some of this garlic for yourself and grow some, too.”
Gilkey had spent years growing it out until it produced large bulbs like the kind he saw back in Italy. Tomcik knew nothing about gardening then, but he was a quick study, harvesting some big bulbs the next summer and growing other vegetables. 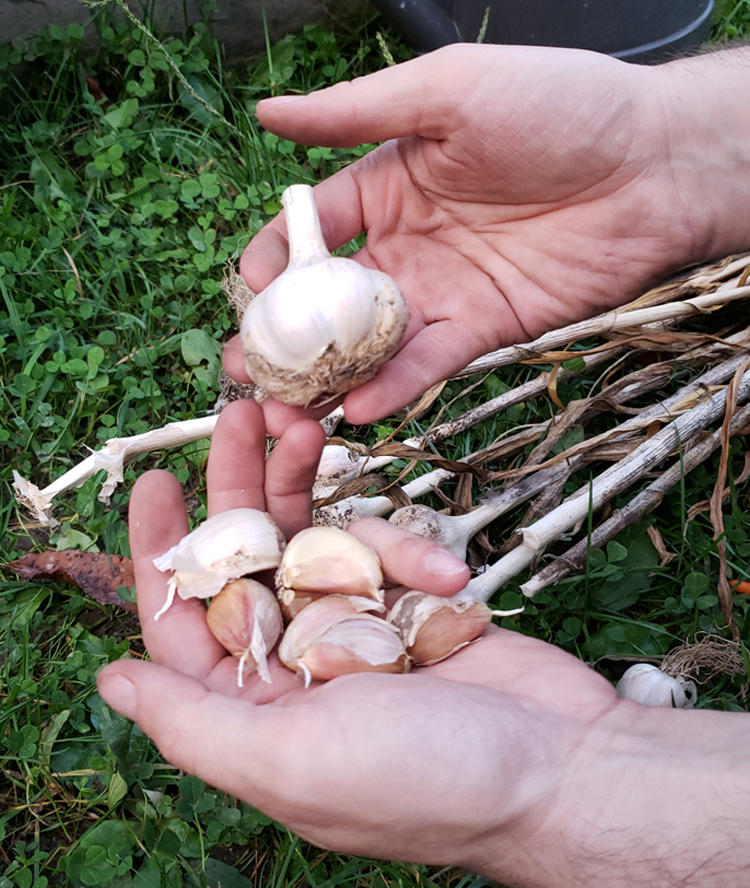 Dan Tomcik holds bulbs and cloves of the garlic he inherited from Dennis Gilkey.

This season Tomcik didn’t eat any of this garlic, earmarking every clove for planting. When he did taste it previously, he discovered it had a very spicy kick immediately with an aftertaste that is a more traditional garlicky flavor.
Garlic is planted in October by splitting bulbs into cloves, placing them in good soil three inches deep and about six inches apart and then mulched with a thick layer of straw.
Besides the garlic he inherited, he’s also planting other varieties, too.
He became a garlic fanatic after working in a pizza shop, adding fresh garlic to breadsticks and “destroying” garlic bread covered with the namesake ingredient. When asked when he eats garlic, Tomcik doesn’t miss a beat, answering, “always.” One of his favorite ways to enjoy his garden garlic is by roasting the bulbs.
“After letting them dry out (after harvest), I cut the top off and put some oil in it and let it bake down,” he says. “I like to squeeze it on toast.”
He bakes them at 350 degrees for about 25 minutes so the edges of the cloves stay soft. He also slices cloves in half and places them on top of the cheese when baking pizza.
“I use a couple bulbs,” he says, laughing. “I stink for days; luckily my girlfriend likes it or we would have a problem.” 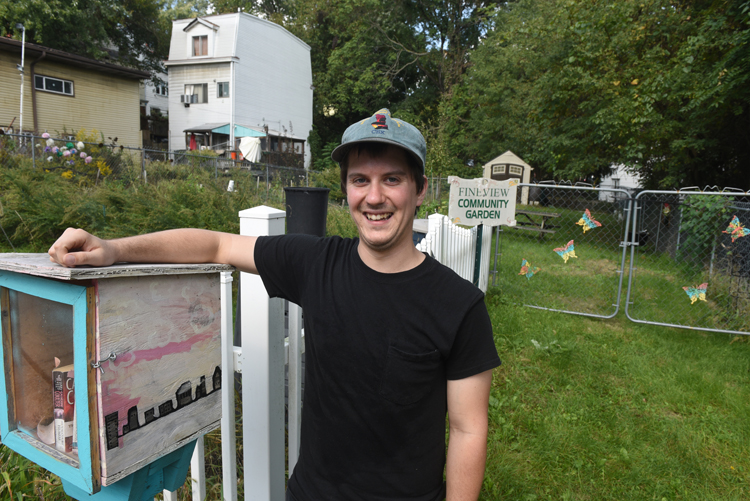 Dan Tomcik poses in front of the Fineview Community Garden.

The garden in the Fineview neighborhood is just walking distance from his house, and he says it’s a good way to connect with his neighbors.
“The reason I got involved in the community garden is that it’s all about sharing,” he says. One gardener gives away tomatillos, another offers up her peppers, and now he’ll have garlic to share.
He’s learned that growing garlic provides more than just the bulbs. The following spring after planting, the cloves sprout about the same time crocus bloom. The tiny greens can be eaten alone raw or added to soups or salads. They are harvested sparingly as the greens feed the bulb below. During a warm fall, sometimes the bulbs will send up greens, but it’s nothing to worry about as the cold will knock them back and the bulbs will be fine.
In early summer, the bulbs of hardback varieties will send up a seedhead called a scape. As soon as it curls, the scape is removed to allow the plant to focus on bulb growth instead of seed production. “We left some scapes on and those were little bulbs,” Tomcik says. “Scapes are delicious, one of the biggest treats of the spring.”
He used the seasonal delicacy to make chimichurri, an uncooked green sauce sort of like pesto, he says, making it with cilantro and oregano. Many gardeners roast the scapes or use them as a green ingredient in pesto.
He didn’t grow up as a gardener but was inspired when his uncle dropped off a bunch of garden vegetables a few year ago at a family party. Tomcik had an epiphany.
“I thought it would be so cool to have so much stuff to be able to have to give it away to your friends and family,” he says.
His uncle got him interested, but Gilkey is the person who really turned him on to gardening. Tomcik is a potter and spends a lot of time in the communal environment with other young artists at the craft center. He found solace in helping Gilkey work and learn in the garden.
“We were hanging out, chatting and pulling weeds, it was awesome,” he says with a smile. “It was a good way to finish your work day.”
One bed in his Fineview garden awaits garlic and in another he’s tending kale, carrots and other crops. “It’s the only time working outside that I don’t have anything else in my mind,” Tomcik says of gardening. “I lose track of time in the garden, it’s really nice. I just completely relax.”

More from Everybody Gardens about garlic planting