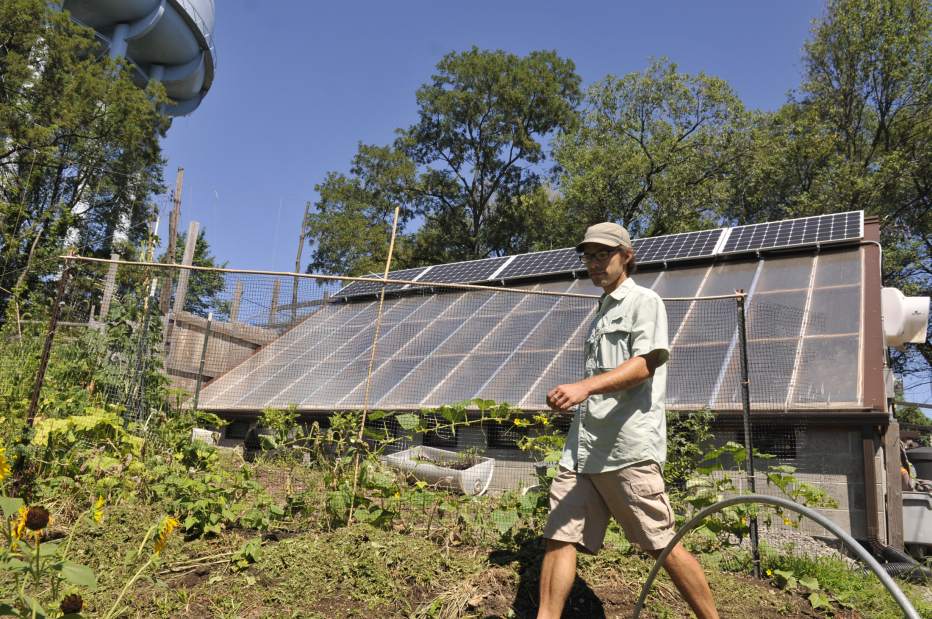 John Creasy is director of the Garfield Community Farm. He’s created a farm filled with diverse flowers and vegetables, and he’s using the farm to educate and feed his neighbors in Garfield.

From the top of a steep hill at Garfield Community Farm, John Creasy smiles and waves.

In a minute, he’s standing on a gravel path in a labyrinth lined with herbs, flowers and greens. The unmistakable aroma of mint is everywhere, as are a host of bees, butterflies and other pollinators working the flowers for pollen and nectar.

Creasy, 38, is director of the farm and an associate pastor of the Open Door Church. The garden and church are linked in their mission to provide good food for the neighborhood.

It begin in 2008 when Creasy and his team thought it would be a great idea to turn an abandoned lot into a community garden.

“What we didn’t realize,” he says, “is at the very top of the hill in Garfield, there’s almost three acres of abandoned land.” In its prime, there were 25 homes on these three city blocks. By the time Creasy began to transform the space, only one house remained.

The project started small and had early success with one small garden.

“The groundhogs didn’t know we were there yet,” Creasy says with a laugh. “The deer didn’t find us.” 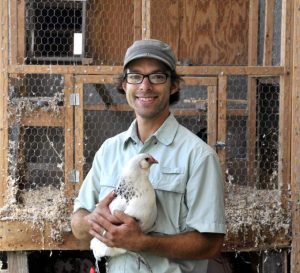 John Creasy holds a chicken in the bioshelter of the farm.

He decided early on that the organic garden was going to be more than just sustainable, but it would actually make the land better as it was farmed.

The original garden was mulched with a thick layer of compost, cardboard, wood chips and other materials, then topped off with more compost.

“It was a restoration from the ground up,” he says. “It’s all about creating good, healthy soil.”

Each year since, the garden has grown, adding fruit trees, perennial herbs and lots of flowers, too. Thousands of pounds of produce are grown here and sold to locals through a Community Supported Agriculture (CSA) program and weekly farmers market. A food pantry receives some of the farm’s produce as a donation. Residents subscribe to the CSA to receive food weekly from the farm.

“There’s no grocery store up here. We’re on a steep hill. It’s not easy to get around, especially if you don’t have a car,” Creasy says.

He’s committed to educating people, providing ecological restoration of the land and food justice, too, by getting good food to people who need it.

“We just felt like starting a garden was the right thing to do,” he says.

With the help of something called a bioshelter, he’s able to harvest year round. It’s a sort of greenhouse, with large south-facing translucent windows made of double-paned polycarbonate. The north side of the building is built into the hillside and insulated. The passive solar design allows for cool-weather crops like greens to thrive in the winter and heat lovers like sweet potatoes to ramble over the raised beds inside.

The Garfield Community Farm is home to a flock of laying hens, too. It might seem out of place to hear the dulcet tones of chickens in Garfield, but Creasy has learned from some longtime residents that chickens were common here decades ago. At one point, there was even a family with a milking cow down the hill.

This time of the year, the farm is picking zucchini, squash, tomatoes, Swiss chard, herbs and much more. The education component of the farm works both ways as Creasy grows what he loves, but he has discovered that might not be what his customers want.

“We found people love red tomatoes; I like growing ‘Cherokee Purple,’ ‘Black Krim,’ ‘Green Zebra,’” he says. Some of those tomatoes ended up being a leap of faith for buyers. So, the “weird” varieties are still grown here in consort with more standard-looking red heirloom tomatoes.

He found the same was true with the eggs he offered. Creasy packaged all the white, blue, green and brown eggs for sale together. At the farmers market, a woman asked, “What’s wrong with them?”

She didn’t buy any, so now, white eggs are sold separately and, even though they are the same nutritionally as colored eggs, they’re more familiar and are actually sold a little cheaper.

A place for education

One of the joys Creasy gets from the farm is teaching kids about food and where it comes from. The farm hosts two summer camps, with one for anyone from the city and another for Garfield residents exclusively.

“Sometimes, they won’t sit in the grass,” he says, “because it’s dirty or there might be bugs.” 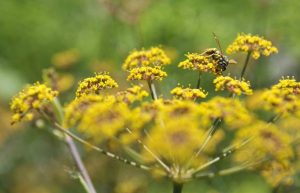 Dill is one of the many herbs John Creasy is growing that attracts pollinators and other beneficial insects.

That doesn’t last long. And the campers soon become more accepting of their new environment. Creasy cooked some zucchini right out of the garden; just about all the kids ate it and loved it.

“They were wanting to go home and get their mom to buy some zucchini and saute it,” he says, laughing.

Creasy has seen firsthand the power his fresh food has, and reminds gardeners they can help, too.

“We’re not producing enough; we need more people gardening and giving their surplus to the food bank,” he says. “There’s a lot of need, and there’s a lot of people that would benefit from more food.”

As the first monarch butterfly of the season lands on a pastel-pink milkweed flower just a few feet away, Creasy reflects on what he gets out of his time at the Garfield Community Farm.

“I’ve always loved gardening,” he says. “I love the beauty of creation that we’ve been given. This space has allowed me to be who I am. The feeling of watching someone walk away with a bag of food and take it to their home is extremely satisfying and why we do what we do.”