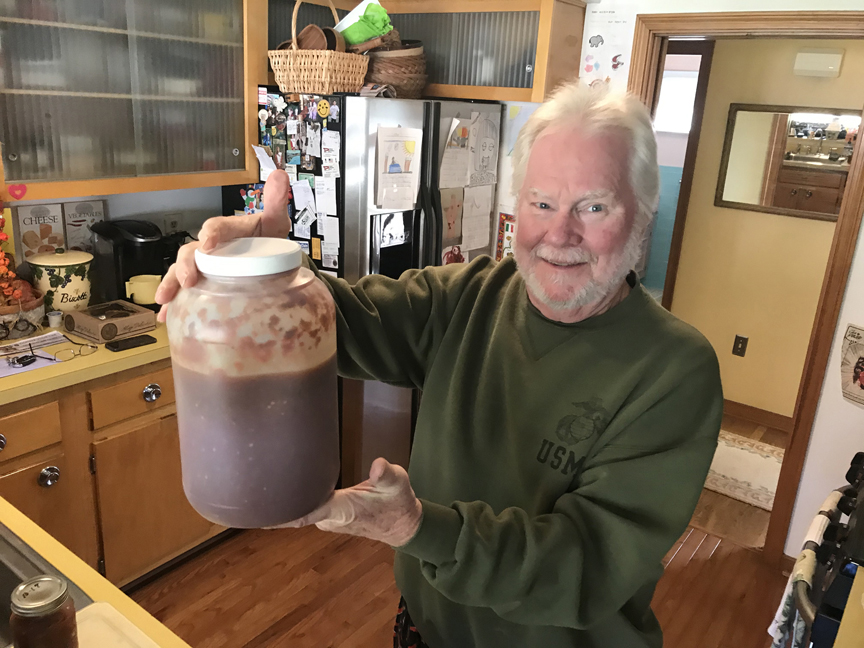 Dave Taiclet of Ross shows off a huge jar of his famous hot pepper elixir. 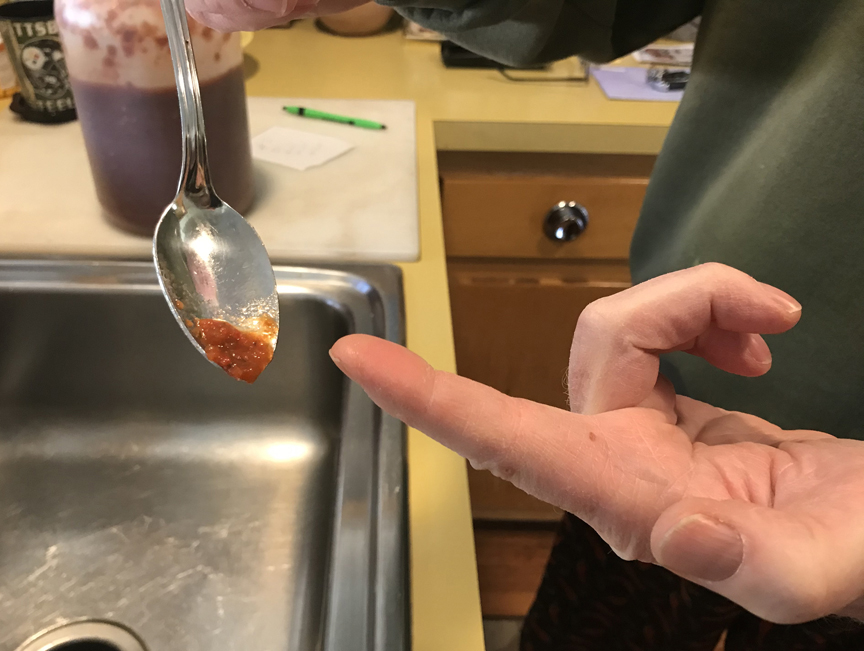 Dave Taiclet of Ross shows off his famous hot pepper elixir. It doesn't take much to heat up a dish. 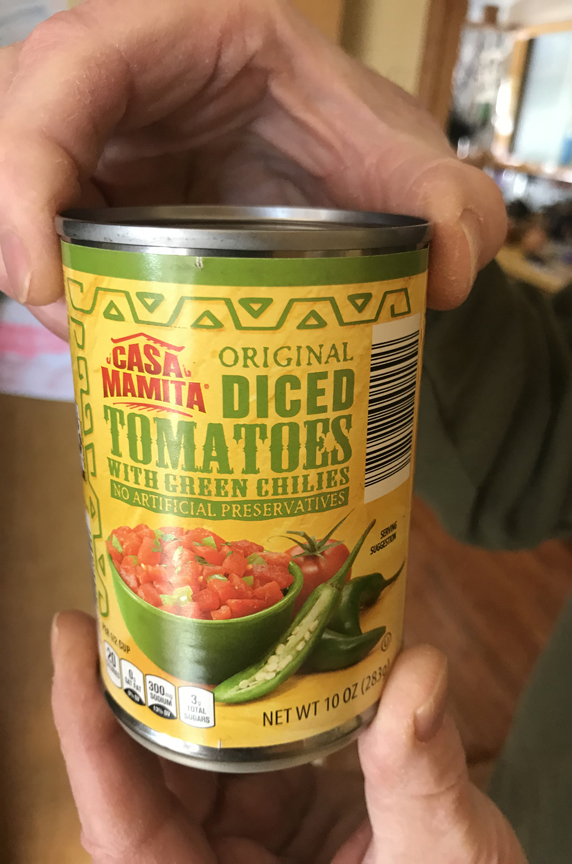 Dave Taiclet of Ross adds a can of these diced tomatoes when making his famous hot pepper elixir. 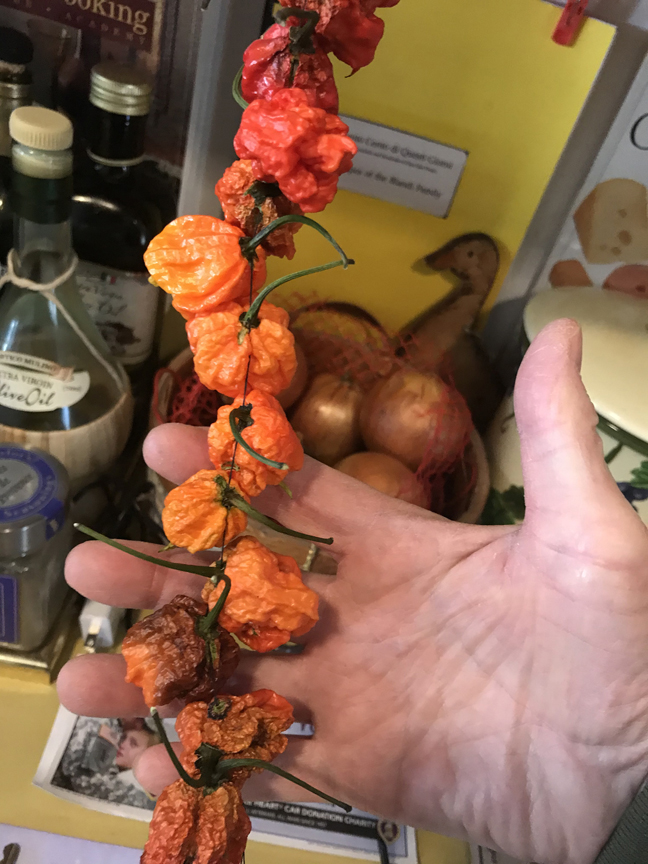 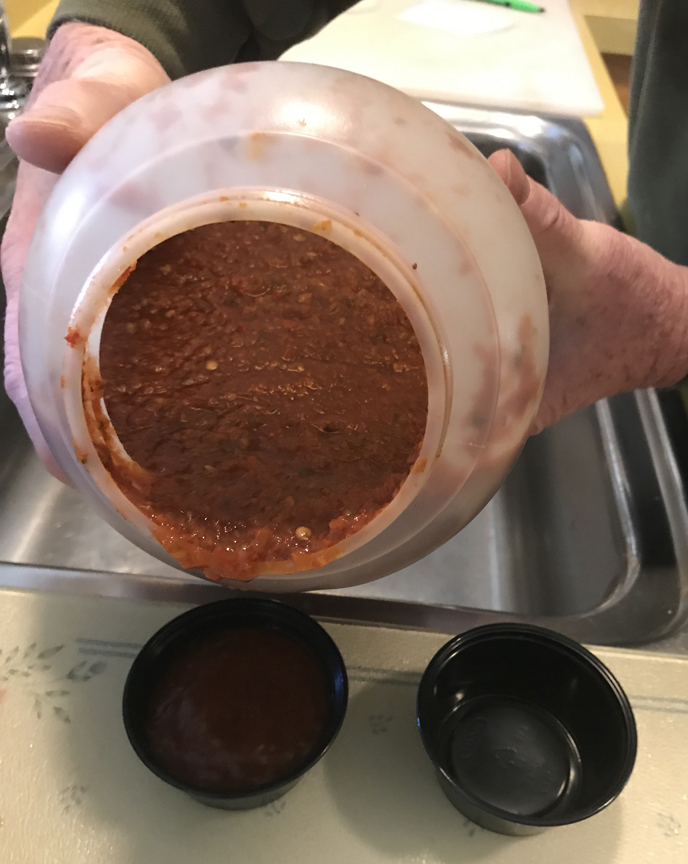 Dave Taiclet of Ross pours out some of his famous hot pepper elixir. 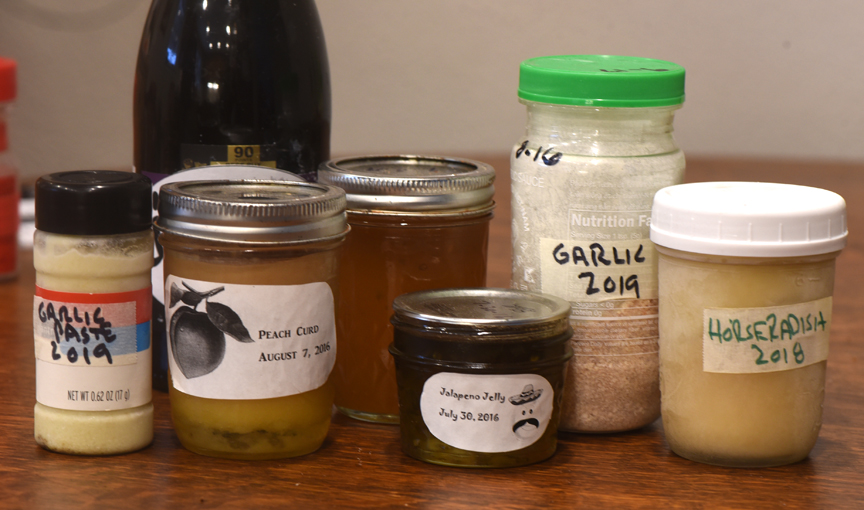 Bruce and Susan Ellis of McCandless love to create tasty treats from the garden. 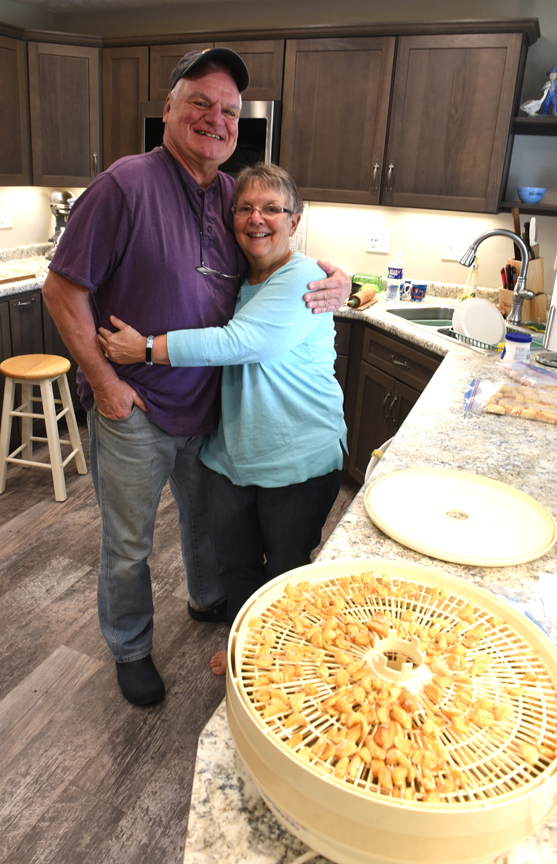 With garlic cloves drying in the foreground Bruce and Susan Ellis of McCandless pose for a portrait in the kitchen. 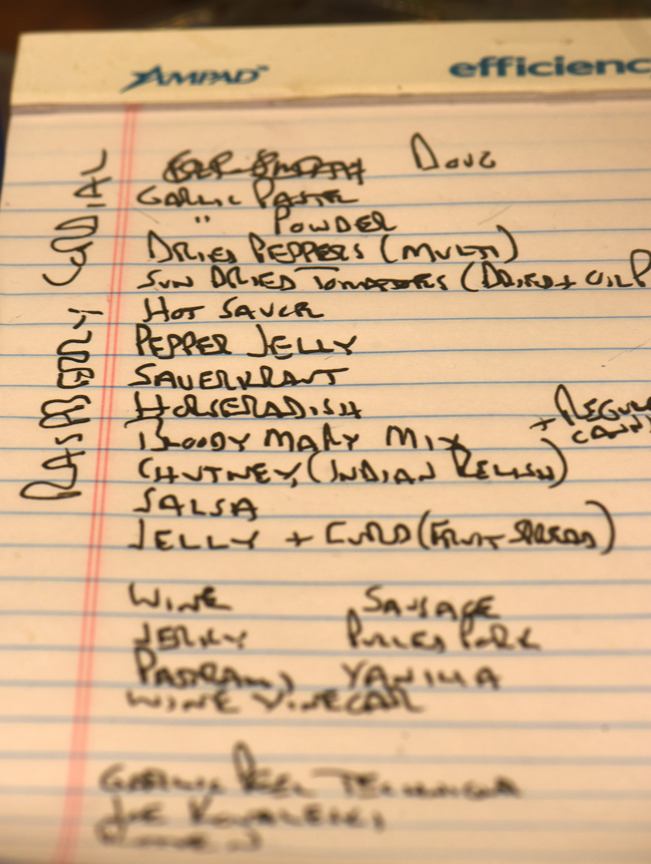 Bruce and Susan Ellis of McCandless love to create tasty treats from the garden. Bruce made up this list of some of the things he wanted to talk about that the couple have made. 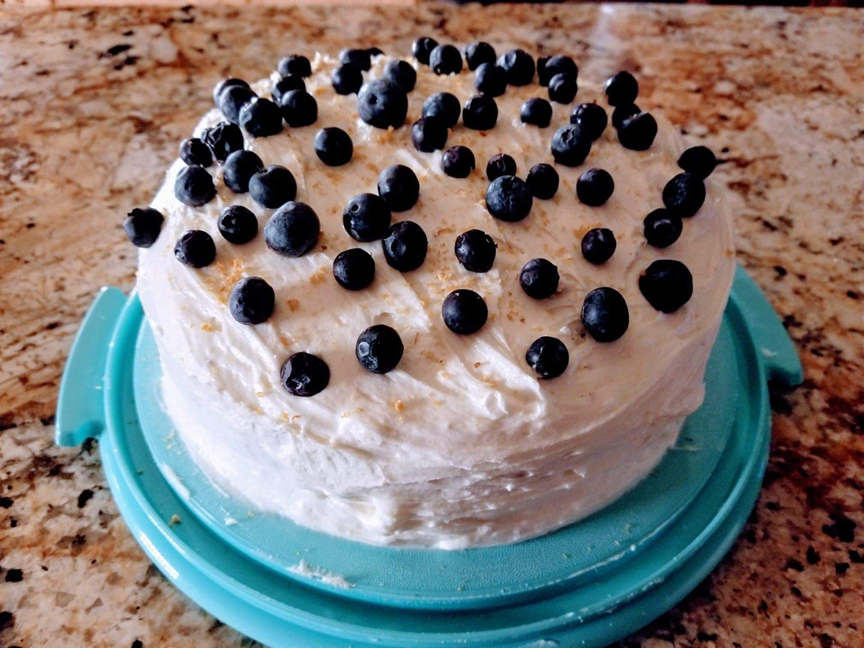 Dave Taiclet is pouring a dark red “elixir” out of a huge plastic jar into smaller containers. Hot peppers hang from strings all around the kitchen. One look at his black pants covered with a colorful pepper pattern leave no doubt that he is obsessed with hot peppers. The air is filled with the unmistakable, pungent, wonderful aroma of fiery peppers used to put some spice in otherwise tame dishes.

Dave Taiclet of Ross shows off a huge jar of his famous hot pepper elixir.

Every gardener knows that what’s picked out of their own garden is better than anything available at the grocery store. How the produce is used is weaved into a tapestry of family traditions which start in the backyard and end up on the dining room table.

Taiclet has gardened his whole life, growing up with parents and grandparents who always had a garden. His Ross garden is filled with tomatoes, cucumbers, garlic and at least 20 different varieties of peppers during the summer. Sweet ‘Cubanelle’s are grown for his granddaughter. He has varieties of sweet and hot banana peppers in the garden, then ‘Tabasco’ and ‘Thai Finger.’

At the end of the row are the infamous ‘Carolina Reaper’ and ‘Trinidad Scorpion.’ They are two of the hottest peppers in the world. When asked how he can actually eat either of them, he replies laughing, “cautiously.” He’ll cut up one and add it to a “Pittsburgh Sandwich” made of tomato with mayonnaise on toasted white bread, sometimes frying the pepper sans seeds.

“I don’t know if it’s the tomato or the mayonnaise that cuts the heat,” he says.

He’ll also cut them into small pieces and share them with friends at a local watering hole, always warning anyone of their fierce heat.

The elixir though is probably Taiclet’s most famous concoction, known for its spicy flavor. He prefers the peppers to fully ripen on the vine, to get the most out of them, which takes until the end of the season.

“I like to let them get orange or red,” he says. “The red is the most intense,” he adds with a smile.

Dave Taiclet of Ross pours out some of his famous hot pepper elixir.

To make the elixir, he takes the fresh, extremely hot peppers, removes the end and throws the whole peppers — 200 of them! — into a food processor and then cooks the mixture down. The first year he tried cooking the ‘Carolina Reeper’s indoors was a disaster.

“Everyone ran out of the house,” he says with a chuckle. “We had all the windows open in the entire house, no one could come back in the house for six hours. I had to throw the crock pot away.”

Now there’s a special pot used only for cooking the famed elixir, and the process is done outside. While the peppers are cooking, he’ll throw in one small can of diced tomatoes and jalapenos for some liquid. The mixture is cooked for 24 hours on the porch.

“You can smell it all around the neighborhood. It’s very powerful,” he says laughing.

A teaspoon full will go into his chili. If he’s making sloppy Joes for his grandkids, he’ll make a separate batch for himself with a dash or more of the elixir.

“Just to give it some excitement,” Taiclet adds.

The ‘Carolina Reaper’ might be his favorite pepper. Even though they are the hottest pepper he’s ever tried, it has a unique flavor that can’t be matched. “They have a little taste of cinnamon at the end,” Taiclet says.

While looking down at his colorful pepper pants, he adds, “Every time someone from the family sees something like these at Kohl’s, they bring them to me.”

“Chop everything up, let sit about an hour to blend flavors, and add hot pasta,” she says. “You just can’t make this dish unless you have homegrown dead-ripe tomatoes. I like to use a few different kinds of tomatoes like yellow pear, for color.”

The lemon blueberry zucchini cake that Kurt Stegner posted on social media sounds like a creative and tasty way to use up extra zucchini. Searching for something different and unique, he found the recipe online.

“I grow green and yellow squash and usually end up with more than I know what to do with,” he said. His family had recently purchased “the perfect family home” in Plum, and he inherited a large garden that needed work.

“This was perfect, seeing as how I come from a long line of gardeners,” he says proudly.

His grandfather was a groundskeeper for a very prestigious family during the Great Depression.

“I enjoy being able to grow things from scratch and serve my family whole, organic food,” Stegner added.

Carla Janitor is now a fan of Italian tortillas made from tomatoes and garlic from the garden with a sweet potato filling. But it wasn’t always that way. She was a picky eater as a child, into early adulthood and turned her nose up at her Nonnie’s tortillas when she was young.

“I can’t believe my stupidity,” she says in an email.

“They are Christmas Eve,” she adds.

Her family always gathered at her Nonnie’s house for Christmas Eve dinner and there were always two casseroles of tortillas on the table, along with extra sauce for serving.

“Nonnie passed away just over 3 years ago,” she says, “and while we can’t all get together and make the tortillas every year because of work schedules, we always gather for Christmas Eve and enjoy eating them!”

With garlic cloves drying in the foreground Bruce and Susan Ellis of McCandless pose for a portrait in the kitchen.

I’ve been enjoying Bruce and Susan Ellis’ garlic paste for years. We met through our shared love of garlic, but the couple doesn’t stop there when it comes to creating culinary magic from the garden. Bruce brings up jars of horseradish, bottles of wine, garlic powder, pepper jelly and more from his basement and places them on the kitchen table as we nibble on homemade salmon jerky. He’s grown garlic for the past 10 years, inspired by his father-in-law’s love of gardening.

“He dabbled in it,” Bruce says of garlic growing. “I ran with it,” he adds with a laugh.

His first garlic tip is about making the cloves easier to peel.

“I take the cloves and put them on the dehydrator for about an hour,” he says. “After that, it just falls off, it’s not even sticky.”

He’ll convert those cloves to his paste, powder and more.

The paste is his No. 1 recipe for friends and family. A “small” batch starts by combining 100 cloves of garlic, a quarter cup of olive oil and a quarter teaspoon of salt in a food processor. Let the processor run until there’s a creamy consistency. He keeps it in the freezer.

“It stores forever,” he says with a smile.

Bruce and Susan Ellis of McCandless love to create tasty treats from the garden. 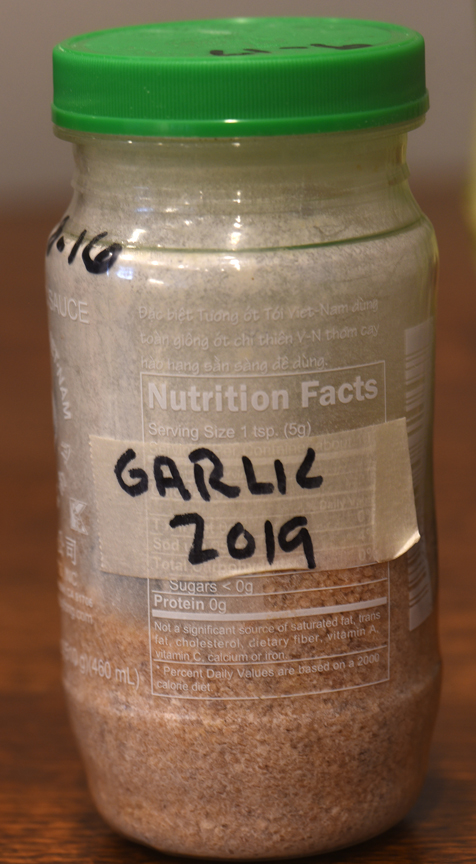 Bruce and Susan Ellis of McCandless love to create tasty treats from the garden like these garlic crystals.

His garlic powder and crystals are made in a similar fashion. The cloves are put in a dehydrator for two days, then into a food processor. He’ll sift the resulting pulverized cloves through a colander. What passes through becomes the powder, and what’s left behind are the crystals. He’ll use both of them and the paste in various dishes to spice up the flavor.

He grows 500 heads each season in his McCandless garden. ‘Killarney’ and ‘German Porcelain’ are his favorites for their hefty size and flavor.

Sitting at the table he reads from a handwritten list of things he jotted down to talk about when it comes to good garden food. He dries lots of hot peppers and make sun-dried tomatoes out of ‘Juliet’. The prolific variety was an All-American Selection in 1999. It produces lots of sweet, meaty one-ounce tomatoes bigger than the grape varieties, but smaller than sauce tomatoes that never crack.

“It’s not rocket science, like everything we do,” he says of making sun-dried tomatoes. The fruits are halved, sprinkled with California garlic salt and dried using the dehydrator.

They make lots of different hot sauces including peach mango, pineapple and other varieties.

“I keep increasing my hot pepper content, and they are not hot enough,” he says. (I’ll be introducing him to Dave Taiclet to solve that problem.)

The hot pepper jelly just follows a standard jelly recipe, but with the peppers substituted for fruit. He pours it over a block of cream cheese and serves it on crackers.

It’s Susan that brought him into the creative world of food. “We’re ying and yang,” Bruce says with a big smile of their relationship. “I think it was Confucius who said ‘Life is simple, people are complicated.’” They both love spending time together inventing dishes. “We have an R+D department that’s crazy,” he says.

Ellis runs through his sauerkraut regime, which starts with 50 pounds of cabbage. Their horseradish comes from roots dug in the spring. The bloody Mary mix both love is made with tomatoes, garlic, Worchester sauce and hot peppers. There’s peach chutney, salsa and even curd in jars made by the pair. They are canning, pickling garlic scapes, making something called raspberry cordial and more. The cordial was inspired after watching an episode of “Anne From Green Gables.”

They love the feeling of independence that comes from making and storing their own food.

While out at a restaurant, tasting something interesting, or watching television, the couple will look at each other as their minds start racing. “We can do this, and probably better,” Bruce says with a laugh when talking of their passion for creating their own versions of recipes.

Some of Bruce and Susan’s recipes.

Video-Best gifts for gardeners from PTL.

Behind the scenes at Phipps Winter Flower Show.