A walk down Main Street in Slippery Rock reveals empty patches of dirt every so often where ornamental pear trees once stood. Some of the other ‘Cleveland Select’ pear trees planted two decades ago are in decline, infected with a blight.
That’s where the team of Luke Gregory and David Krayesky wants to help replace those trees with a diverse range of different cultivars. Gregory is a senior at Slippery Rock University, majoring in biology with minors in chemistry and leadership, Krayesky is associate professor of biology at SRU. He’s been involved with the town in many ways, including being part of Slippery Rock Development, a community organization that raises funds for the borough.
“As someone who is a faculty member at Slippery Rock,” Krayesky says, “we’re expected not only to do teaching, but also some kind of service.” 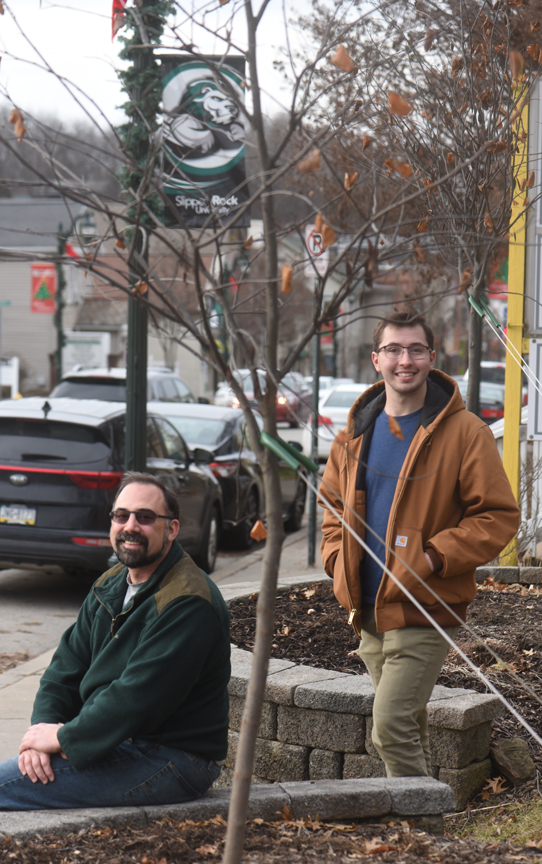 David Krayesky and Luke Gregory have teamed up to try and replant the town of Slippery Rock with a variety of street trees. Photo by Doug Oster

He brought the tree problem to the attention of Gregory who started Fight The Blight, which is using crowdfunding to try and raise the nearly $20,000 needed to replace dead and dying pear trees with other species not affected by the blight. The goals of his project are to remove the infected trees, diversify by planting new trees and beautify the community.
The Slippery Rock Foundation will match every dollar that’s donated, up to $5,000. So far Gregory has raised a little more than $2,000 with half of that coming from the Slippery Rock Rotary Club. He’s been speaking to groups in town explaining the importance of the plantings, hoping to strike a chord as he did with the Rotary.
“One of the (Rotary) members said, ‘This is really going to leave a legacy for our town,’” Gregory said proudly. “It’s very exciting. A lot of my work is more in the lab; it’s fun to get out in the community and use my interest in plants and help a project like this.”
He became a certified tree tender in 2016 and became fascinated with plants in his sophomore year after taking a botany class. Gregory hopes to eventually get a doctorate in plant sciences after graduating this year.
The pear trees are certainly beautiful and those that continue to thrive will be left in place. The problem, Krayesky points out, is that they are a monoculture.
“If you only have one species and a specific pathogen comes in, like we have here with this bacteria,” he says, “it’s a problem.”
The variety of different trees which will be planted as replacements include ‘Royal Burgandy’ cherry, ironwood, prospector elm, redbud, ivory silks and lindens. They will complement the blooms of the pear as some will flower before and others after the tree has dropped its flowers. 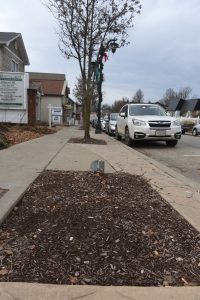 Here you can see where a pear tree is missing.

“I’m very pleased with Luke’s work,” Krayesky says, beaming. “I’m so glad he’s had this initiative. It’s nice when young folks are really excited about taking part in their community.”
For Gregory, he’s working hard to get the word out and raise enough money to create his legacy of trees in the town.
“I think it’s about persistence,” he says. “You’re going to get a lot of no’s but you just need to keep pushing.”
There have been 22 more students certified as tree tenders, and Gregory hopes to train even more in the spring when the planting will begin. He hopes they will be just the start of a movement to keep these trees thriving for decades to come.
“It’s really the townspeople and students,” Gregory says. “If they can learn how to prune these trees and how to maintain them over a period of time, it will really be a success.”

To learn more and donate go to fightheblight.com. The duo are also looking for trees from nurseries to help the project.

These unique trees will make the landscape special.