As visitors descend a path from the welcome center toward the historic Fallingwater house in Fayette County, a group of gardeners is planting in freshly turned soil. Ann Talarek is the horticulturist here and has joined forces with Nell Gardner, who has the same job at two other Frank Lloyd Wright houses, the Darwin Martin House and the Graycliff estate in the Buffalo area. 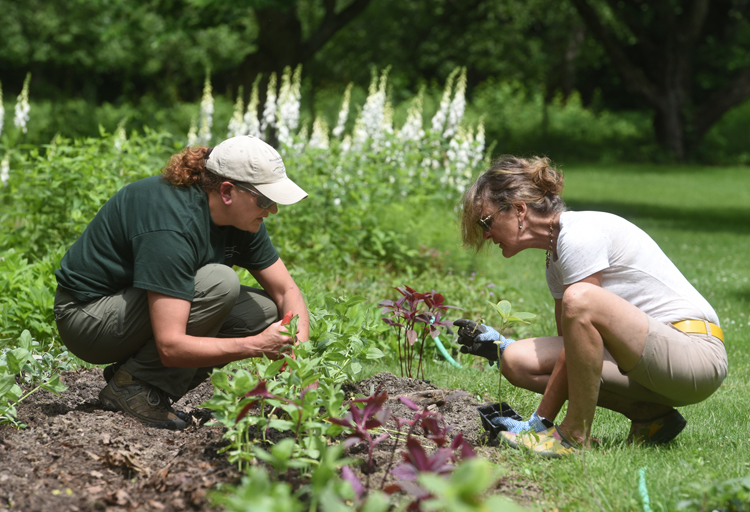 Fallingwater horticulturist Ann Talarek works with Nell Gardener who is horticulturist at two other Frank Lloyd Wright houses, the Darwin Martin House and Graycliff Estate. The two are planting a new cutting garden at Fallingwater. Photos by Doug Oster 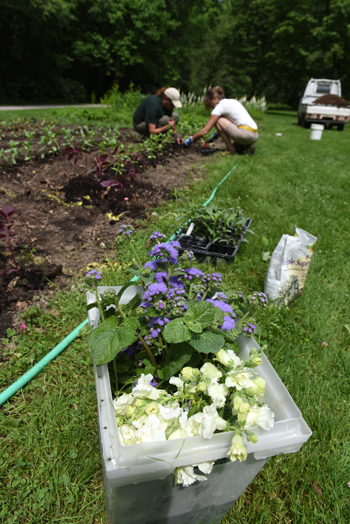 They are creating a cutting garden, filled with flowers that will be used in vases around the house and for events, too. The two gardening friends share a love of plants but also are linked through the Wright homes that they care for.
“We all have the same issues. Built-in planters, invasive problems and water leaking in the house,” Talarek adds with a laugh.
The Kaufmann family lived here from 1937 to 1963 and actually had three gardens in this space. The current placement of a fiber optic line means only two of the gardens have been recreated, and this is the second. Gardner was the perfect choice for the project as one of her specialties is this type of gardening.
“I’ve been growing cut flowers since 1992,” she says, “which is why I got involved in the Martin house, because Mrs. Martin grew cut flowers.”
With the help of Fallingwater interns and the marketing director from the Martin House, Talarek and Gardner methodically planted almost a thousand flowers, including blue salvia, gomphrena, lithianthus, three types of celosia, statice and zinnias.
“It’s a long-lasting cut flower,” Talarek says of the zinnias, “and it was one of Lillian and Edgar Kaufmann’s favorites.” Looking over the long rows of plants, Gardner visualizes what will become of the plantings over the season.
“The way that it’s layered in the garden, it’s going to be a beautiful tapestry,” she says.
A steady flow of visitors walks by, looking over to see what’s going.
“I think it’s all about high impact,” Talarek says of the upcoming blooms. “We’re making the rows so they are walkable for people. People enjoy the hummingbirds and butterflies.”
Like most Western Pennsylvania gardeners, the deer are the biggest threat to the garden. That’s reflected in the choice of plants and repellents that will be used to keep the flowers unmolested. Since this garden is in its first planting, Gardner also chose cultivars for other reasons.
“There’s a wide array of cut flowers,” she says. “I wanted to start out with the varieties that I knew were going be successful here. That were easier to grow, would make beautiful bouquets, had roots in the past, could be useful in events here and had that had the highest chance of success, I picked the stalwart varieties.”
The pair has been close to each other since 2011 when Talarek visited Buffalo to see the other Wright homes.
“We never stop talking,” Talarek says with a smile. “This had been a really fun team effort. It’s just a testament to our ongoing friendship.”
After the last plant is in the ground, Gardner looks over the garden with satisfaction. 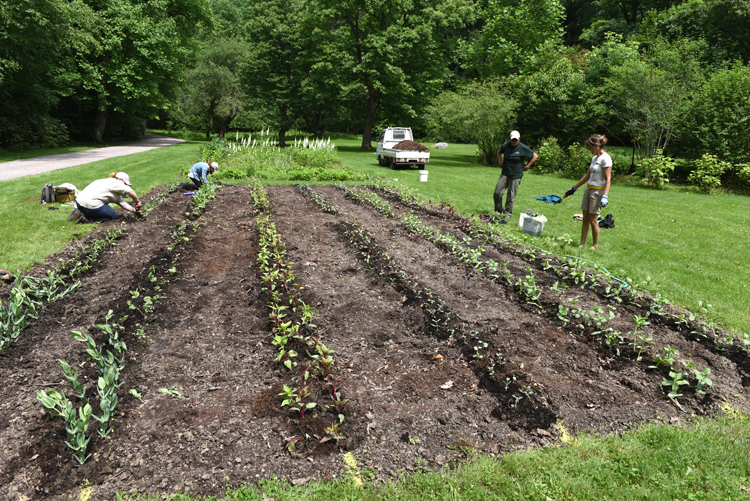 “I’m coming back for sure,” she says. “I have to. These are my baby plants. I have to watch them grow.
“I’m going to have Ann send me pictures,” she adds with a laugh.
Gardener wants visitors to get something special out of seeing the flowers as they make the walk to the famous house.
“To me it’s always important to reflect what the people that were here saw and what they harvested, she says
When people come here, it’s the whole experience. It’s walking down the path, it’s going in the house, it’s seeing how people lived here. When you have plants from the past, it just enriches their experience.”