Daffodils have sprouted, now covered in show, what to do?

What a wonderful surprise it was to see daffodils sprouting after a short thaw. Two days later they are covered with snow and temperatures are predicted to fall into the teens. These bulbs were planted in a small, narrow strip right between the front of the house and a sidewalk. 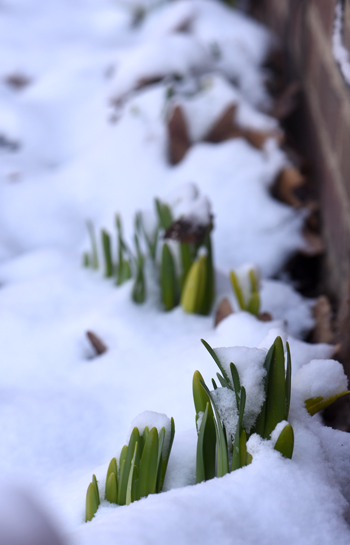 These daffodils are always the first to sprout. They grow in a little strip between a stone sidewalk and the front of the house. Photos by Doug Oster

It was an interesting choice for whoever planted them, I’ve been enjoying the pretty yellow blooms for nearly 20 years now. They are always the first to push up through wet oak leaves being fooled into thinking spring has arrived. It’s the stone sidewalk and brick on the house which heat up the soil and bring the foliage out of hibernation.

There’s good news and bad news, as in this case there’s nothing we can to do about it. Nature has to run its course when it comes to spring bulbs, covering them with something would do more damage than good. There’s no way to know how long these bulbs have been lured into false spring, but they have always performed, regardless of crazy changes in weather. Last year the leaves came up early, followed quickly by the buds which blushed a pale yellow and opened, only to be struck to the ground by a late blast of winter cold. It’s one reminder to plant lots of different varieties, some that bloom early, mid-season and later too.

There are seasons when early daffodils in bud get blasted by a winter chill and don’t bloom, but it only happens once or twice in a decade.

These “sidewalk” bulbs can also teach us a lesson about where to plant bulbs in the fall. Most need to completely dry out in the summer. These are planted under the eave and gutters of the house so get plenty of moisture all winter long, but not much after the weather breaks. Look for problem areas like the drip line of trees to plant bulbs, or sunny hillsides with great drainage.

While photographing the snow covered daffodils, the birds were in full song. I heard the unmistakable call of the red bellied woodpecker for the first time this year. That familiar song brings hope that spring will arrive sooner than later. 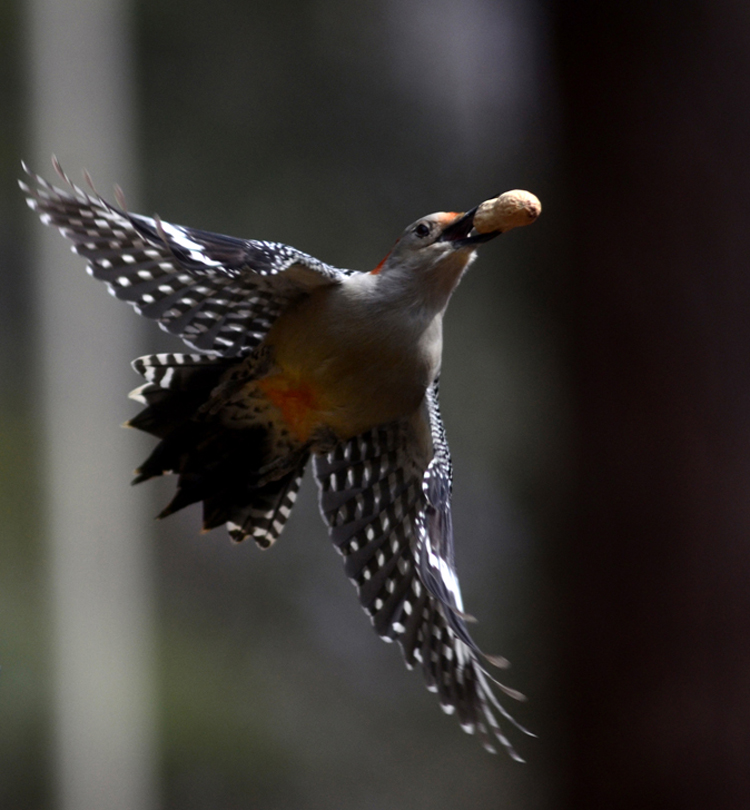 A red bellied woodpecker flies off with a peanut from a birdfeeder. Woodpeckers and other birds can be attracted to the landscape by offering water, food and shelter.