The sound of clinking metal plant tags jangled about by the wind echoes though Joseph Hamm’s Daffodil Hortus, one of the greatest collections of daffodils in Pennsylvania.
This American Daffodil Society public garden is overflowing with spectacular blooms. Georgine Materniak and Carol Stough are carefully looking through rows of daffodils, blooming in every conceivable shape, color and size. They are searching for anomalies, anything that doesn’t look exactly as it should. They call themselves “field sisters” as they work hand in hand to help Hamm, who can’t navigate the garden like he used to since he lost his legs in 2010.

Joseph Hamm looks at some of the flowers at his Daffodil Hortus in Washington County. It’s one of the greatest collections of daffodils in the state. Photos by Doug Oster 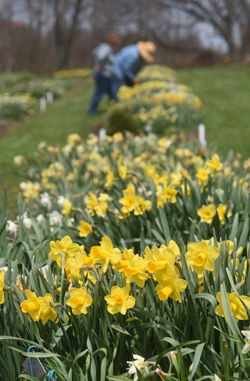 The “field sisters” carefully look through beds of daffodils in search of something that shouldn’t be there.

Hamm sits inside his renovated 1800s barn in a wheelchair waiting patiently for them to bring in flowers for inspection. He’s answering countless emails from gardeners asking for identification of their heirloom daffodils from his Buffalo Village, Hopewell Township home in Washington County.
His impressive plant collection of around 2,000 varieties includes some dating to the 1700s and maybe older. As they increase in numbers, he sells the surplus and it’s imperative that the bulb is the right variety. Sometimes something else creeps into a bed or a newly planted bulb isn’t what it should be, so that’s one of the most important jobs for the “field sisters.”
“It’s not a business,” Hamm says. “All I want is eight or 10 bulbs of each.”
The rest are coveted by daffodil growers and breeders alike. Sometimes he’ll switch to his outdoor motorized chair to get closer to the flowers, driving through the soft grass beds between the blooms.
In 1998 his insurance agent convinced him to join the daylily society and then other garden societies followed including, iris, hosta and eventually daffodil.
“The reason I really got into it was because I got tired of the deer eating everything,” he said with a smile.
While he lived in the state of Indiana, he was mentored by two daffodil legends, Helen Link and Helen Trueblood. He shares a birthday with the former, although 20 years apart. She passed away last year at the age of 99.
When the obsession kicked in and he discovered there were almost 30,000 different types of daffodils, there was a realization that it would be an impossible number to grow. He started by choosing cultivars introduced in 1938, the same year he was born. From there his collection was built with heirloom varieties from that year and older. His collection also evolved to include varieties introduced by certain hybridizers, with 400 different breeders represented.
“My whole effort is the study and preservation of the older daffodils,” Hamm says proudly.
There are also newer types growing in the beds as planting continues annually. It is breathtaking to see so many different daffodils all displayed together and painstakingly marked with correct names. Hamm encourages people to visit, take photos and explore the gardens for free from now through the end of May. He reflects on what he hopes they get from a visit: “Some of the joy I have from the flowers.”
He had a serious medical crisis in 2010 that caused him to eventually have his legs removed near the knees. He’s soldiered on but misses planting outside.
“It drives me nuts,” he says. “I want to get into the dirt.”
His gardening fix is fulfilled by tending a multitude of containers on the adjacent deck. There are plants everywhere inside too, with amaryllis bulbs in full bloom around the house. He starts lots of plants from seeds and experiments with cuttings. When the daffodils are gone at the end of May, the beds are filled with annual flowers.
Materniak and other family members began to help when he became ill. She’s here four days a week working in the garden. It was right around when she retired from the University of Pittsburgh that her brother was plagued with his medical problems.
“We didn’t know what was going to happen,” she said about the daffodils. “I don’t think the garden was even on our radar.”
A year later, two of Hamm’s daffodil friends came to the garden and began to tutor her. Before that, she enjoyed the flowers and always liked the bulbs he would give her, but didn’t understand the importance and therapeutic nature of his work.
“I get a lot of pleasure out of being outside,” she says. “I can come out here and be in the sun in the quiet of the field and just get lost in the work and the satisfaction of seeing progress.”
The self-described “city girl” then gets to go back to Squirrel Hill at the end of the day. “This gives me a chance to be in both worlds,” she says with a little smile.
Like her “field sister,” she didn’t know much about daffodils when she came to help out in the garden.
“I learned more than I ever could have imagined,” Materniak said. Now both are comparing notes on types and names of the cultivars. They carefully inspect ‘Lilac Delight,’ transfixed by slight color changes in the cup.
“You don’t see that all the time, and it’s going to change,” Materniak says. They collect the flower to bring inside for Hamm to see. 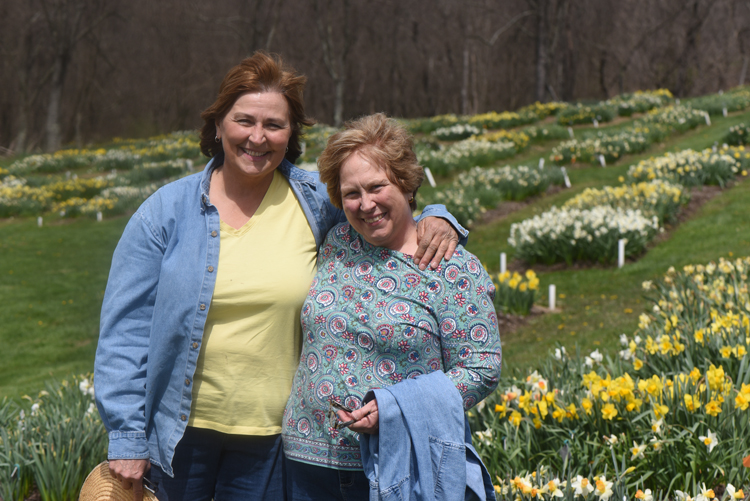 During a break, Stough sits inside to explain why she spends long hours in the garden. Her eyes well up describing her time working with Hamm and his sister Materniak.
“Joe’s family is so supportive of him,” she says, trying to hold back tears. “It’s just so much love, to be around it and part of it is awesome. Joe means so much to me, I just love coming here.”
She answered an ad six years ago that Hamm put in the paper looking for work and recognized the phone exchange as being local. She realized it was close to home as she lived only six minutes away. Stough was just becoming an empty nester, and her parents had passed away around the time she started, with the farm she grew up lost.
“It fills the void of the loss of family and the family farm,” she says of working here.
On this sunny day with the fields nearly at peak with blooms, Stough reflects on the effect Hamm has had on her life.
“He’s an inspiration,” she says, “because in his situation he has fewer down days than I do. When I came here, I sort of thought that life was over for me, but he taught me that’s it’s never over; he’s an upbeat person.”
Hamm smiles easily especially in the presence of visitors and his beloved daffodils. Some years the season starts in February and will last until Memorial Day, all depending on the weather. He claims no variety as his favorite and cherishes the spring season. 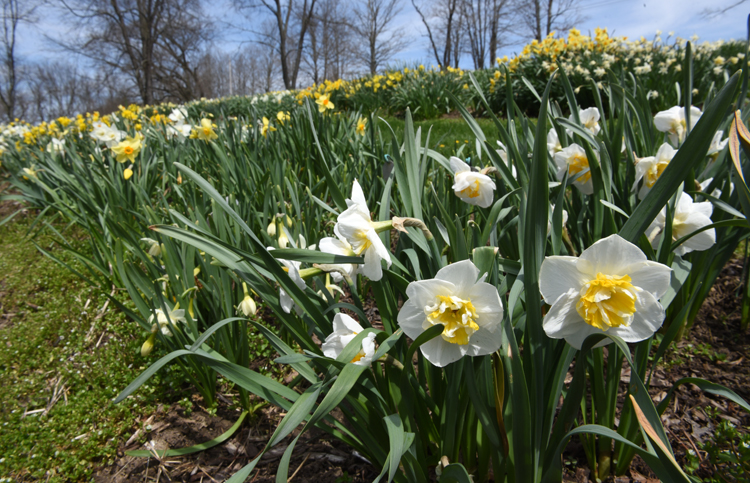 Joseph Hamm’s Daffodil Hortus in Washington County is one of the greatest collections of daffodils in the state.

“It’s like a rebirth of nature,” he says of the annual flower spectacle.
Some of his old bulbs aren’t popular anymore, but he treasures them all. ‘General Patton’ harkens to another era along with many others named for the stars of the day. In the 1940s, ‘Spencer Tracy’ was introduced. At the urging of the “field sisters,” Hamm registered ‘Katharine Hepburn’ last year so the two Hollywood legends could finally be together.
There’s a legacy for this garden, according to the 80-year-old Hamm. When he’s gone, the daffodils are all earmarked for growers who know what they are doing in the American Daffodil Society.
When asked what he gets out of all of the blooms, he says, “Satisfaction. They are like visiting old friends when I get to see them. We herald the daffodil, we’re the preachers of the daffodil.”