For 35 years Nancy Martin has composted. She’s so passionate about making sure organic matter doesn’t end up in the trash, she’s been known to take a doggie bag of leftovers after a meal at a friend’s house.

“We’ll be sitting there snacking on something,” she says with a smile, “then I always bring it home and put it in my compost. I feel I was involved in eating and I don’t want to send it to a landfill.” 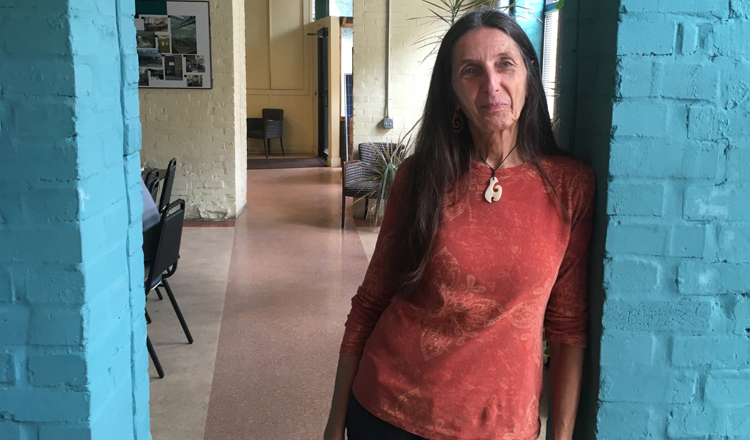 Nancy Martin is an environmental educator at the Pennsylvania Resources Council. One of the the things she does is teach people how to compost.

The environmental educator at the Pennsylvania Resources Council teaches composting and vermicomposting (indoor composting with worms). PRC is the oldest environmental grass roots non-profit in the commonwealth.

Martin has had a compost pile in some form for more than three decades. At one point living on a farm, it was easy, she says, as it was a pile out in the yard. Now that she lives in a neighborhood near West View, she composts in a closed bin.

“If you live in an urban or suburban community, then you’ve got to keep (your compost bin) rodent proof,” she says, “with the lid that locks on.”

There are lots of different bins available. Students who complete her class get a FreeGarden EARTH compost bin. Composting is easy, she adds.

“You can compost anything that used to be alive but no longer is,” Martin says, “but you don’t want to put everything in a backyard bin in an urban or suburban area because of attracting rodents.”

Students who take the composting class at the Pennsylvania Resources Council receive a FreeGarden EARTH compost bin. It rodent proof.

Things like yard and garden debris and kitchen scraps (sans meat or dairy) are the main ingredients.

“We also try to stay away from weeds that have gone to seed and hard-to-kill weeds,” Martin says. “You don’t want to reintroduce those to your garden when you use your compost.”

Also avoid any diseased plants, as those diseases could overwinter in the bin.

When putting things from the kitchen or garden into the pile, there are green ingredients and brown. The first is nitrogen rich; the other is a carbon source.

“I like to recommend that people start off 50/50 by bulk,” she adds. An example would be matching what comes out of the kitchen with the same amount of shredded leaves. If the pile decomposes too slowly, back off the browns, she adds. If it’s wet or there’s a bad odor, add more browns to absorb excess moisture.

Homeowners could reduce the amount of material sent to the landfill by 25 percent or more by composting, but there are other reasons to compost as many gardeners know.

“Garden beds love compost. It helps retain moisture; it also improved drainage,” Martin says. “It helps our plants have a stronger immune system; it supplies nutrients; it helps with the tilth and friability of the soil. You can also use it as a mulch.”

Compost would be a perfect thing to spread on a lawn, too. About a quarter of an inch scattered over the grass will give it everything it needs to thrive. Finished compost is also a great addition to potting soil.

Composting might be the best way to recycle as the material never leaves the site, and homeowners get the direct benefit of what they make in the form of compost.

But it’s not just something for the garden.

“Even if you’re not a gardener,” Martin says, “you’re doing the earth a great service by composting, because you’re returning that organic matter back to the soil.”

Martin wants her students to learn how easy composting can be and why it’s important.

“I guess all I’m really hoping for is that we’re going to reduce the amount of material we’re sending to the landfill,” she says, “and at the same time making beautiful gardens.” 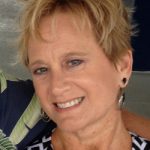 Kay Kehler is the digital services manager for Mantis. The company is probably best known for their lightweight rototillers, but has offered rotating composter for 40 years.

Kay Kehler is the digital services manager for Mantis, a company probably best know for its lightweight effective rototillers. But for 40 years they have also offered a variety of rotating composting bins. It’s a fast way to make compost by keeping the fresh material moving by turning the bin once a day.

“In about four weeks or so, you’re going to have your first batch of compost,” she says.

A single rotating bin is filled two thirds of the way with fresh material and then you stop.

“If you keep adding materials, you’re going to start the composting process all over again,” Kehler warns.

The company offers a two-bin system where one side could be making the compost and the other filled with fresh material. The same things that are recommended to add to a regular bin would also be used in the rotating bin. One advantage of these bins is it’s easy to get material in and compost out because of the way they are designed. Some are made of durable plastic, and the bigger composters are made of galvanized steel.

“Getting kids to compost is a good teaching lesson and fun if you turn it into a science project,” she adds. 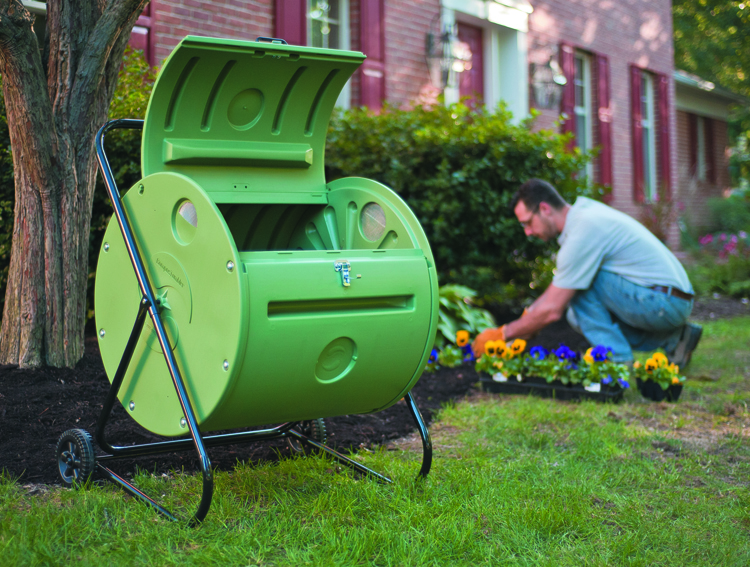 The Back Porch ComposTumbler from Mantis holds up to four bushels of compost.

For gardeners who want their compost in a month or so, a rotating bin is the only way to go. The material reaches 140 to 160 degrees quickly, which kills weed seeds and pathogens.

“You turn kitchen and yard waste into gold for your plants, Kehler said.

Doug Oster is the Everybody Gardens home and garden editor. Reach him at 412-965-3278 or doster@535mediallc.com. See other stories, blogs, videos and more at everybodygardens.com.

Mantis rotating composter information is here.
This is a cool list from Mantis of things you might not have thought to use in a composter.

This story shows how composting works at Phipps Conservatory and Botanical Gardens.