Ellen Zachos, known as the Backyard Forager, laments a late fall snow as she talks via phone from her home in New Mexico.
“It’s melting, but it was early, that’s for sure,” she says. 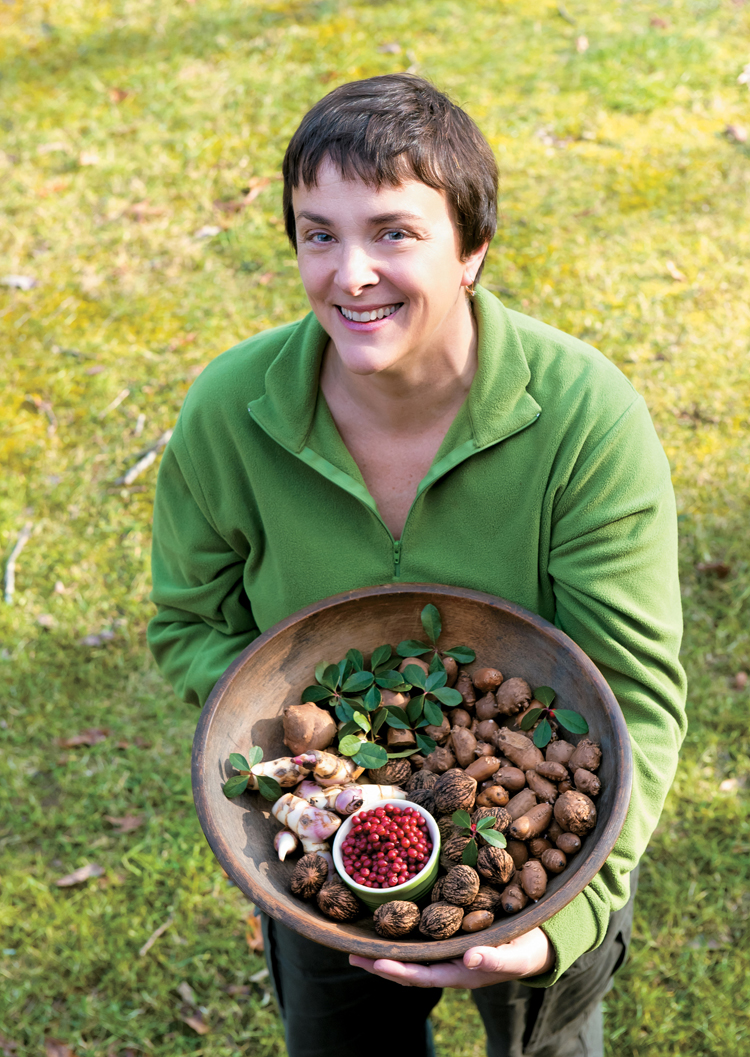 Ellen Zachos is the Backyard Forager, author of two books on the topic. Photo by Rob Cardillo

Zachos laughs easily and talks with passion about the food she harvests and cooks from in the wild. Fall is one of the best times to explore fields and forests for wild edibles, she says.
“In spring you’re ready to jump out of the gate because you’ve been in winter for so long,” she says, “but fall is the most bountiful season for foragers.”
Some of the harvest now includes fruits, nuts, cool weather greens, mushrooms and more.
“It’s a glorious time to be a forager,” she adds.
There’s a caveat though when picking from the wild.
“Never put anything in your mouth if you’re not 100 percent what it is,” Zachos warns and adds, “be smart.”
Mushrooms in particular can be dangerous, so have an expert confirm their safety before ingesting one.
Zachos recently was contacted by an old friend from college who sent a picture of a mushroom, asking if it was indeed edible.
“Once people know you can make this kind of identification, you’ll be bombarded with photos,” she says laughing. (Zachos confirmed that mushroom was safe to eat.)
Nuts are another thing being harvested during the fall season.
“It’s a lot of work to shell most nuts,” she says, “but I Iove the flavor of black walnuts.”
With a banner year for acorns, Zachos says they are easy to shell and taste great, too. If a nut has a tiny hole in it, leave it alone though. That’s the exit hole of an acorn weevil that has fed on the nut. She collects acorns from many different species of oak and doesn’t see much difference in the flavor of the varieties.
The trick to make them edible, she says, is to leach the nuts, removing bitter tanins. After shelling the nuts with a nutcracker or hammer, there are two ways to leach the nuts. The quickest way is by adding them to boiling water and then into another pot of boiling water, back and forth until they loose their bitterness.
Cold leaching is another way that takes a few days, and it prepares the acorns for multiple uses, even to make flour.
Her favorite way to cold leach will blow your mind. “Most people just cannot deal with this,” she says.
“This is the lazy way to complete the task. The toilet tank is emptied (not bowl), and the walls are scrubbed. The acorns are put in a mesh bag or cheese cloth and lowered into the tank, then it’s filled back up with water.
“Every time it flushes, water goes through the acorns”, she says. “This is perfectly clean water, it’s a nice passive way to leach them.” 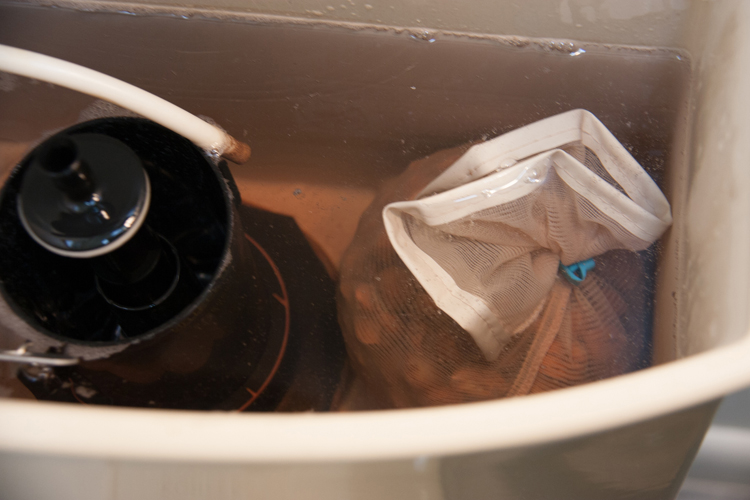 Acorn nuts are leached in the toilet tank. Photo by Ellen Zachos

Depending on how often the toilet is flushed, they’ll be ready in several days. Another taste test for bitterness and when sweet enough to eat, they are ready.
If the toilet idea doesn’t appeal to you, the shelled acorn nuts can be put in a very good blender like a Vitamix. Fill it one third full with nuts and the rest with water. Turn on the blender and make a slurry of nuts and water — it will take about two minutes. The slurry is put into a glass jar topped off with water and put in the refrigerator. Every day for the next week or so, pour off the water on top and refill with more water. Taste the acorn meat and when it’s not bitter, it’s ready to eat. The slurry needs to be strained and squeezed through a cloth to remove excess water. Then the nuts can be used fresh, frozen or dehydrated. 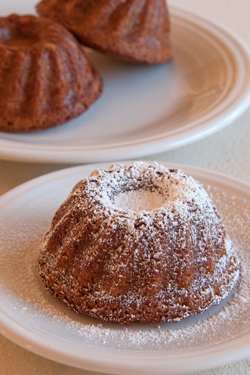 This is an acorn flour bundt cake with crabapple sauce was made by Ellen Zachos, The Backyard Forager.

Zachos is pickling some of the nuts and making bread, an acorn baclava with acorn flour and acorn mushroom soup. Her specialty is an acorn bundt cake with crabapple sauce. The flour made out the nuts is gluten free, by the way.
Right now is also one of the best times to harvest cool weather greens, Zachos says. Things like dandelion greens, oxeye daisy foliage, dock, sheep sorrel, garlic mustard and other plants are out there. The foliage of garlic mustard can be used many ways, and Zachos has a tasty recipe for using it in pesto. It’s a great way to use up the endless supply of this invasive plant. She also has a way to add them in a martini. Garlic mustard can be used in any savory cocktail.
Dandelions are very nutritious, but can be bitter.
“I call them a wild edible superstar. This time of the year you’re probably going to be best off harvesting the new leaves and the roots,” she says.
The new growth is always going to be more tender and less bitter. The roots are also edible. Even though the roots are purported to be a coffee substitute, Zachos says they have their own unique flavor.
“If you roast the roots and then grind them up, and drink it as a hot beverage, it has a really good flavor all its own,” she says. “Either with lemon or cream, and you can also use the roots as the base for a homemade bitters for cocktails.”
When foraging for anything, it’s important that you are harvesting from somewhere that’s clean, she adds. Think about chemicals on a lawn, stay away from busy roadways and always ask permission, she says. It’s always safest to pick things from your own landscape.

Zachos uses crabapples in many of her recipes.

Crabapples, especially the bigger varieties, are delicious, she says.
“Some of them are tastier than apples from the grocery store,” she says. “I must say that crabapples and bourbon are a match made in heaven.”
The fruit of spicebush is something she says she could not live without. The red fruit looks like barberries but is a little bit fleshier. “I usually harvest them and dry them and grind them up to use as a spice,” Zachos says.
People often don’t think of foraging for things to make drinks, whether they are non-alcoholic or alcoholic. Sassafras tea turned into a simple syrup and combined with rye whiskey makes a tasty cocktail. A simple syrup is made by combining equal amounts of tea and sugar, then whisking it together in pot over low heat until the sugar is dissolved.
Her passion for wild edibles runs deep as does her love of cooking — both are stress relief for this prolific author and national speaker. Turning family and friends on to a meal of wild edibles is something that makes her day.
“I love food so much,” Zachos says.
“It’s stuff that makes me feel very special because you can’t buy it,” she adds about foraged foods. “You have to go out and work for it. It’s so much fun, so exciting to make it and serve it to friends and know it’s something they have never had before.”

Zachos is the author of two books about finding food in the wild, ‘Backyard Foraging’ and ‘The Wildcrafted Cocktail.’ Both are great reads, filled with beautiful photos, tasty recipes and, best of all, Zachos’ expertise and wonderful sense of humor, which also revealed itself during our interview.
For more information, recipes and to purchase books go to www.backyardforager.com.

More from Everybody Gardens-

Convert your garden to a wildlife habitat with help from the Audubon Society of Western PA.

Grow something different with Niki Jabbour.