The art of healing

Sue Abramson’s beautiful black and white photos of the forest are dramatic studies in light, each one evoking a mood and offering a window into the artist’s life. She has spent much of her time in the woods photographing the beauty of nature. The photographs are part of her book “A Woodlands Journal.” It chronicles the ups and downs of her life and how photography has helped her heal. 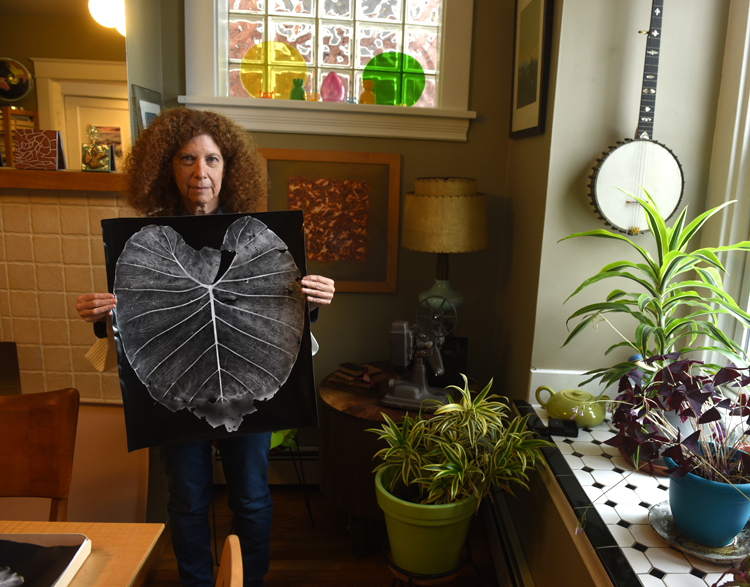 Sue Abramson has written a book called ‘A Woodlands Journal’ and has a photo exhibit at The Westmoreland Museum of American Art.

Abramson has had a lifelong love of the outdoors, climbing trees as a kid in a park close to her childhood home in suburban Philadelphia. Her passion for photography was inspired at Raquette Lake in the Adirondacks where she spent her summers. When she was about 12, a photography teacher taught her the basics of the camera and darkroom work. She shot funny pictures of friends, made collages and even a special postcard to send back home.
“It was way more fun than anything I would have done at home,” she says with a laugh.
“It was gorgeous,” she says of her summer camp. “I went with a good friend, and it was amazing.”
Her father then gave her his old Argus 35mm camera which she worked with until she received a Minolta SRT-100 single lens reflex 35mm camera for her 16th birthday. While attending art school and trying to find her way, one photo class changed everything, and she knew what her life’s work would be. Abramson experimented with large format film, antique cameras, and a pinhole camera but settled on a medium format film for her work moving forward.
Life events helped to form her style. She was devastated by the death of her older brother in 1973 and used time with her camera to grieve and deal with her sadness.
“I think that darkness and depression has ruled a lot of the way I see things,” Abramson says. “It’s not always there. I’ve got a good life and think I have a good sense of humor.”
She lived in a geodesic dome during the late 1970s with her husband Kevin Kelly on the edge of a mountain in Emmitsburg, Md. That’s when she started photographing the forest and where the couple also began to garden.
“I love to walk in the woods,” she says with a smile. “I didn’t always take pictures. I would shoot for a few years and then I would stop. But I would always go back to the woods.”
She explained why she chose black and white photos for the project.
“Initially it was about the drama of the light and that represented itself best with just black and white,” Abramson says. “I like the darkness of the prints. I’ve always been attracted to dark, moody work. I just loved the different tonality of it.”
When her husband died unexpectedly in 2006, she used her work to try and get through the days. Abramson was photographing in the same way she did after losing her brother.
“It does show in my work,” she says sadly. “I always understood in my work that there was a darkness to it. I never completely understood that I was processing grief while I was working. The work I shot after my husband died was very dark shadowing pictures with little bits of light for some hope.”

“Woodlands #52” is one of the works of Sue Abramson in her book ‘The Woodlands Journal. She has spent most of her life photographing in the forest and has used her work as a way to heal. This photo was shot in 2006 after her husband Kevin Kelly had passed away.

Another project is a current exhibition at The Westmoreland Museum of American Art. “The Only Constant is Change,” includes prints of giant elephant ears and some artistic scans of garden lettuce, too. Both projects keep her connected to her late husband. The couple became fascinated with elephant ears when they saw them planted in the Western Pennsylvania Conservancy Community Flower Gardens.
“Oh my god, we have to have those in our garden,” Abramson remembers saying, “and the leaves were massive.”
They added the plants to their Squirrel Hill garden and when the huge leaves were at their peak in the fall, she turned them into art.
“I just cut the leaves and took them into the darkroom and printed them,” she says.
The leaves were laid on photo paper and then the room lights are turned on for four seconds.
“I loved them. They were so amazing,” she says proudly. 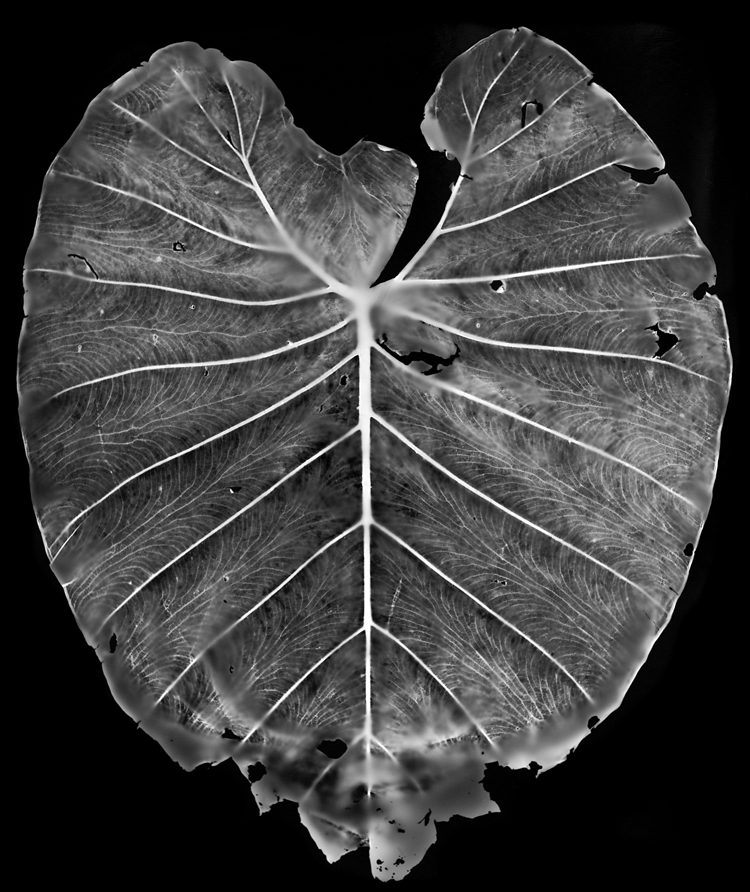 “Elephant Ear #55” is one of the works of Sue Abramson that’s on display at The Westmoreland Museum of American Art.

The large prints are spectacular, showing the leaves in different stages of growth and decline. Before the frost, bulbs are brought inside and stored in her basement to be planted out the following spring.
Kelly died the next April and, as she struggled with her grief, the elephant ear bulbs were on her table and she started to photograph them.
“I felt good and I thought, this is an odd feeling,” she says about shooting photos again.
There was a realization that the act of creating art could help her deal with these feelings.
“I knew I needed to do more of that to get better,” Abramson adds.
She committed to caring for the bulbs seasonally and continued on with the project for a decade.
Another art project in the show is also keeping Kelly’s memory alive. He always planted lettuce on St. Patrick’s Day. His last planting was a month before he passed away. When it was ready, she harvested the leaves.
“Of course, he planted enough for an army,” she says, laughing.
Abramson pressed the leaves in between pads of paper to preserve his last planting. A year later she rediscovered the leaves and they had grown mold, creating interesting patterns. Abramson scanned the leaves, turning them into wonderful works of art.
“I love the fact it’s a collaboration between the two of us,” she says fondly. “He planted the seeds, then I picked the lettuce and did the art. He was a cool guy, the coolest. He was the one that got me into gardening. These projects and working in the garden help me stay connected to Kevin, trying to keep an enduring relationship.”
Abramson has had a storied career in photography, teaching for 30 years at Pittsburgh Filmmakers, running the program for the past two decades of her time there. She’s had countless exhibits over the years including a recent show at the prestigious Hunt Institute for Botanical Documentation.
Looking back at her art, she discovered how her photography was helping her cope with tragedy.
“Years later I realized it was the fear that was coming out,” she says of her work. “There’s fear all the time. Will that happen to me? Will that happen again to someone I love? How will I even navigate life with this new smaller family?”
Abramson has dealt with life the best she can, expressing her feelings through her art.
“I think there is sadness in my work,” she says, “but I think there is also a real lust for life. Even though I have had a lot of tragedies in my life, I feel like I’ve had a really good life.”

Details: ‘A Woodlands Journal’ is available at the Silver Eye Center for Photography, The Westmoreland Museum of American Art gift shop and online at spacescorners.com.

The photography exhibit at The Westmoreland Museum of American Art runs through Dec. 20.